The Grapes of Meth 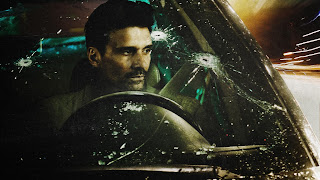 Watched Jeremy Rush's Wheelman and dug it. No, it's not an adaptation of Duane Swierczynski's novel of the same name and I'm happy to report it's neither a knock off of The Driver, Drive or Baby Driver. It's stylish without existing in the hyperstylized worlds of those flicks. It features lots of driving action, but never gets too fancy. It also manages to get every penny of its budget on screen by shooting almost entirely inside the car, providing an ever-changing neon backdrop whilst saving a buck or three. Think of it as a grittier, more violent one-crazy-night version of Steven Knight's Locke. 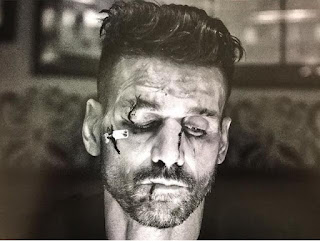 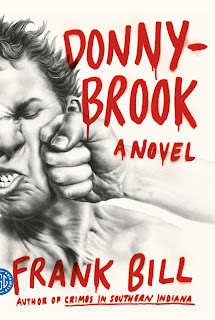 Frank Grillo holds the center of the frame as the wheelman easily while matching a solid supporting cast including Garret Dillahunt, Shea Whigam and Slaine. And that's good news for fans of N@B star Frank Bill, 'cause Grillo's also front and center as Chainsaw Angus in the Tim Sutton directed adaptation of Donnybrook which starts filming this very morning.

Which makes this a banner month for Bill as his new novel and follow-up to Donnybrook, The Savage, is going to be published in a matter of weeks. 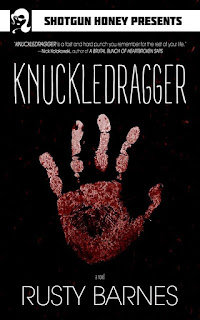 You know who else has a brand new book out? Rusty Barnes, that's who. Not only has Shotgun Honey reprinted Ridgerunner, they've announced another 'killer from the hills' novel, Knuckledragger will be released next week and that makes me happy.

Here's a piece I wrote at another site years ago on the occasion of the release of short story collections by the two of them - Frank's Crimes in Southern Indiana and Rusty's Mostly Redneck.

(note: hyperlinks appearing in the original piece are no longer there - sorry if that makes for a choppy read) 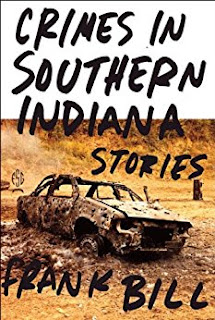 Did you see this article at Salon.Com heralding the work of authors like Bonnie Jo Campbell, Donald Ray Pollock, Philipp Meyer and Shann Ray as latter-day Steinbecks? The thrust of the piece suggested that in these difficult times people are turning to writing that comes from the guts of the national economic melee and chronicles the lives of people whose daily lives bear the brunt of the civic consequences incurred by decisions they were hardly a factor in.

The article also included one Frank Bill whose debut collection, Crimes in Southern Indiana, just hit bookstore shelves this week, (and broke more than a few, I’d venture). Whew! These are some hardboiled hardscrabble crime tales. Truth be told, I'm not sure the people in these stories know there's a recession on. Bill’s characters don’t live on the edge of society, they’ve long since fallen off, and meeting them on their own turf is a harrowing experience  (the manufacture and cultivation of controlled substances, gunrunning and prostitution are the family businesses - just imagine being downsized from that). 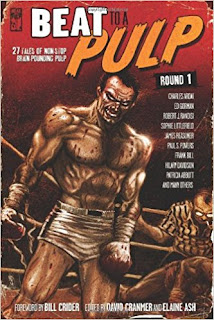 His prose is a stripped-down muscle car without a muffler, tender as a brick and soothing as a gasoline popsicle, arriving at a tone you might call old-testament-pulp, while the stories themselves bite and kick and howl, and are run through with notions of the bonds of blood and kin that threaten as much as they ever may comfort. Themes of survival, revenge, family and good business practice are explored in these short, punchy, straight to the point with no beating around any scrub brush bursts of narrative. Bill cut his teeth on crime publications like Plots With Guns, Thuglit and Beat to a Pulp, that prize brevity and brutality above grammatical propriety and metaphorical feinting, but he's quickly been sniffed out by the capital 'L' literary world and with good reason. Read in succession, this collection transcends the harsh environment of guns and drugs and nastiness to a place where, (to quote the Salon.Com piece quoting Bonnie Jo Campbell paraphrasing William Faulkner) "the only writing that matters is about the human heart in conflict with itself. 'And there's plenty of that around here.'"


To sum up - grotesque, infectious and a quick fix for a flat-lined pulse, read it if you wish Hank Williams III would record a soundtrack to Knockemstiff, or Chuck Palahniuk would collaborate with William Gay more often. 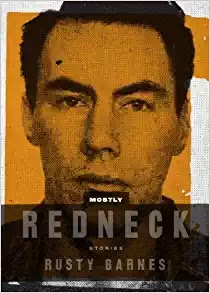 Want more? Check out Rusty Barnes' brand new Mostly Redneck which may read like an exercise in understatement next to the Technicolor blood-splash of Bill, but you’ll be sore in the morning after these stories – dangerous, tragic, funny and creepy in combinations you haven’t tried before. 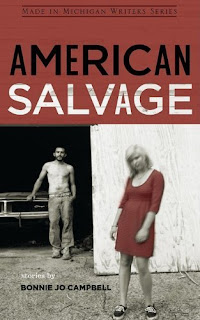 More still? You haven’t got long to wait for Daniel Woodrell’s The Outlaw Album and I dare say you haven’t read anything like Scott Wolven’s Controlled Burn before. Or go back to Chris Offutt’s Kentucky Straight Bonnie Jo Campbell's American Salvage or Pinckney Benedict’s Town Smokes. Those cats were hard before times were.
Posted by jedidiah ayres at 2:34 PM