Get Thee to a Nerdery, Post-Heist

Did you notice that the Do Some Damage podcast took a break over the holidays? Well, it did and it looks like I never even linked to the last episode we recorded. So here you go, me talking about Steve McQueen's Widows. What did we do with our time off? Steve Weddle finished his fucking follow up to Country Hardball novel Broken Prayer, Chris Holmes and Holly West? Who the fuck knows? 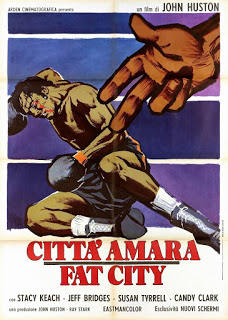 As 2018 wound down I squeezed in a couple more podcast appearances I've yet to let you know about. First, I was honored to jump on The Projection Booth once again with Mike White and my former (unbeknownst to me) neighbor Heather Drain to discuss John Huston's Fat City starring Stacy Keach, Jeff Bridges and Susan Tyrell. If you've never seen it, check it out before listening to the episode because we go right through spoilers.

It's based on the novel of the same name by Leonard Gardner and I finally read the book myself a couple months back. It's a great example of the American beautiful loser genre and the film works well as an example of the cinematic version. In the episode Heather points out that the film has a Charles Bukowski flavor and says she'd have liked the opportunity to see Tyrell's Oma share a story with Henry Chinaski and I think that'd be a great fit. Read the book or see the film if you like John Fante, William Kennedy or... Willy Vlautin.

Also - Mike scored an interview with motherfucking Stacy Keach himself. You need this episode. Trust me.

Second, I'd like to thank Kent Gowran for turning me on to Blake Howard's One Heat Minute podcast, a show dedicated to picking apart and blowing up Michael Mann's greatest hits movie Heat one on-screen minute at a time. The fuck you say? The fuck I said. Each episode discusses a single minute of screen time in glorious nerdy detail and it's a pretty great discussion each time out.

How could that be?

Well, the guests he gets are a big part of it. One dude would almost certainly run out of steam on a 170 episode run about a single film, but each time somebody new jumps on there's a chance for more perspective and fresh takes. Recent guests have included Jordan Harper, Joe Lynch, Jon Abrams, Bill Duke and cinematographer Dante Spinotti.

Even recenter guests include me. Fuck yeah, I got to get my nerd on big time and geek about one of my all-time favorite films and the minute I was assigned is a doozy - minute 107 which features Robert De Niro's crew post-heist/pre-escape and Al Pacino's team closing in. The whole minute has very little dialogue, but tons of tension built in thanks, in large part, to Brian Eno's driving soundtrack cut Force Marker.

Give it a listen and let me know. 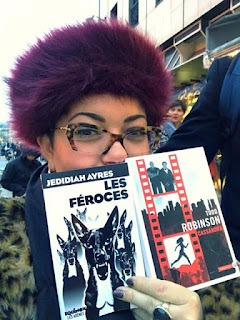 Also - this picture of Renee Asher Pickup on holiday in France holding just purchased copies of Les Féroces and Todd Robinson's Cassandra (The Hard Bounce) made my New Year. If it don't warm your cockles they might be broke.
Posted by jedidiah ayres at 6:43 AM

Labels: Do Some Damage, Fierce Bitches, Interview with me, Patting myself on the back