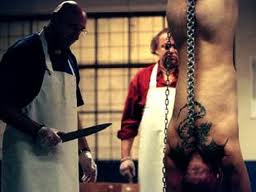 WTF? All my favorite video stores are closing. I know the whole format is on its way out, but why why why do the good ones have to go first? I've yet to sign up for Netflix or any sort of on-line rental service because frankly it sounds barbaric to have to wait for a movie I want to see. I want what I want right the hell now. Plus without being able to stroll the aisles vaguely creeping out the employees with my hours of browsing I'll never come across some real gems like last year when I found Nicolas Winding Refn's Pusher trilogy. It's one of those rarities in the film or lit world when the sequels improve upon the original, (really the third is the best of the bunch, but wouldn't be as rich without the other two - neat). Pusher is about Frank, a low level drug dealer in Copenhagen who has to raise a lot of money very quickly in order to avoid being killed by the cops or Milo the kingpin he owes. It's a fast and rough and a tad too familiar, (think Danish Guy Ritchie rather than Danish Martin Scorcese as a quote on the box boasts), though the Danish setting is a nice change. Pusher II, follows Frank's partner Tonny, (the compellingly watchable Mads Mikkelsen) years after Pusher and his release from prison as he grapples with his father and girlfriend with whom he produced a child he's never met. Pusher III is about Milo, (the only character to appear in all three) and a single day in his life as he attends AA meetings while planning a lavish party for his daughter's twenty-fifth birthday and dealing with a large shipment of heroin that's been botched. It's a surprisingly rich and moving portrait of a bad man taking a hard look at him self and his life's work. After ripping through the trilogy I found an English language film of Refn's, Fear X with John Turturro, Deborah Kara Unger and James Remar and from and original script by Refn and Hubert Selby Jr. It's a complete change of pace from the Pusher films, measured and quiet, (for once someone displays the influence of David Lynch in a satisfying way) and strange. I miss you, Bijou Movies, Movie Set, and yes even chain stores when they're populated by movie people can be good ones - the late Rock Hill location of Hollywood Video and the Fayetteville, Arkansas Hastings, (pre DVD revolution). Movie Nut is across town, but I suppose I'll be making the pilgrimage to find the gems on the shelf that I don't know I want yet. BTW if you get a taste for Danish crime flicks check out Pistoleros directed by Shaky Gonzalez and featuring Zlatko Buric - Milo from the Pusher films, or the completely odd Adam's Apples starring Mads Mikklesen.
Posted by jedidiah ayres at 7:40 AM

It's happening every where, Jed. Video stores are going the way of privately owned bookstores. I think here in the Phoenix area there's only one independent store, DVD Paradise (And they still carry VHS, which is kind of weird to see.)the rest are all Hollywood or (sigh) Blockbusters. It's a shame because so many small or foreign films get lost in the shuffle of the chain stores or Netflix.
Great call on the Pusher flicks. Just started to delve into these and I'm having a lot of fun with them

on one hand i sympathize with your lament for the small video store. years and years ago i LOVED Bijou, and after that Whiz Bam (briefly). but one can stumble upon gems just as readily, if not moreso, via the internet method as well. example... after reading your recommendations at the end of your post, i went to Netflix and stuck Pistoleros in my que. upon doing so a box pops up with Netflix's own suggestions for other films i may like. and included in that list is Adam's Apples as well as Pusher 2, other films you suggested yourself in that same paragraph. as well as The Bank Job, Inside Man, and a half dozen other films i'm unfamiliar with. and upon adding Pusher 2 to the que, one of their recommended films is The Proposition, which i'm confident you would approve of. i won't argue there's a joy lost in browsing movie box art hands-on, the same can be said of the even older days when vhs was the format and many films, particularly horror and exploitation types, proved even more enticing than most of today's dvd art. times change, frequently not for the better. but with minor adaptations i think the primary goal here - finding hidden, unknown movie gems - can still be accomplished.