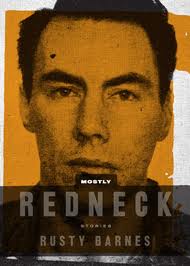 Oky doke, so yesterday I was working one of the day jobs and saw a complete stranger walk through the front door with Frank Bill's Crimes in Southern Indiana under his arm. Said he's just seen it in the window at Subterranean Books and it looked interesting. Weird feeling, that. Why just last week over at Ransom Notes I was bringing that particular books some attention. Perhaps unnecessarily. You’ve been to this here blog once or twice, you’ve probably seen mention of Mr. Bill. In case you aint, he’s good. You should check out his book. (Actually, as good as the collection is, I’m eager for the world to get a taste of Donnybrook his novel due out in 2012 – I love me some Donnybrook and so will you). Anyhow, at said Mystery Blog post I tossed off a reference to another brand new book – Mostly Redneck by Rusty Barnes and though it really deserves a post of its own, I wasn’t going to be able to wrangle it much further into the spotlight on the mystery blog. Which is not to say there aint crime involved, there is – plenty – just not consistently enough to justify o’re there.
But here at the Hardboiled Wonderland we eat that shit up with a wooden spoon. I interviewed Kyle Minor a long while back and he made this observation about crime writing -  Literature is all about our crimes, isn’t it? Sometimes they’re big, like murder, and sometimes they’re smaller, like telling a lie for personal gain. But those are the places where literature is situated – where a wrench is thrown in the progress of social nicety, and social nicety is replaced by the human impulse for retribution, and we get a chance to see what’s beneath the surfaces we’ve all been making out of our pretendings. – Right on, Minor. That’s what I’m talking ‘bout. Barnes writes the kind of economically abused and disenfranchised American characters who's wild passions don't often couple with expansive imaginations that can realistically conjure a life outside the dead-end one they're currently inhabiting. They're dangerous when boxed in and the books is a chronicle of so many ways to trap a human being, I'm not sure what's left. You can visit Rusty's world at Fried Chicken and Coffee.

A couple weeks back Brian Lindenmuth posted his list of the best noirs of the the last ten years or so at the Mulholland Books site. Good list that included some surprises, one of which was Matthew F. Jones's Boot Tracks. Just so happened I was reading Mr. Jones's A Single Shot at the time and ready to put more from him on my reading list. Today, at Ransom Notes I'm talking about A Single Shot as well as Johnny Shaw's debut Dove Season, (looking forward to meeting Shaw at N@B next week at N@B).

Speaking of which. Oh my gawsh, it's gonna be wild. Duane Swierczynski, Hilary Davidson, Glenn Gray and John Rector are ready to put some baaaaad ideas in your minds and I have a feeling the evening will spiral from there and turn into a marathon of human wreckage. Of course, drinks will be available to soothe the tailspin, as will books! I'm gonna make sure more Noir at the Bar anthologies are ordered and I suspect that Crime Factory antho will be floating around. I believe Cameron Ashley will be in attendance that night, so ask the hell him.

This morning, I'm heading out to Los Angeles with Scott Phillips to pitch our wares to the TeeVees and who knows, maybe give those N@B upstarts, Beetner, Blackmoore and Calcagno a kick in the pants. Hmmm, who else do I know in the city of fallen angels? Brace yourself, L.A. When we return at the end of the week it's straight out to Corydon, IN. for Frank's book release party where we'll read along with Kyle, Donald Ray Pollock, Matthew McBride and Rod Wiethop (or Norman if you prefer). I'm wore the fuck out just thinking about the next two weeks. For my plane trips I'm taking Roger Smith's Dust Devils and Simon Logan's Katja From the Punk Band.

See you on the other side.
Posted by jedidiah ayres at 6:34 AM