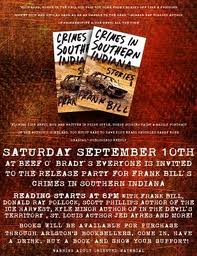 Soooo groggy. My poor, feeble body-clock has me hung-over, but I am back from the desert. Had a good time in Los Angeles with Scott Phillips - great to hang a bit with Alison Quinn, Sara Gran, Jordan Harper, Eric Beetner and Stephen Blackmoore. I remember thinking that I was sitting at a table with two guys with the best titles ever for short stories - Ten Thousand Gallons of Infected Saliva and Like That Japanese Chick What Broke Up Van Halen, (both incidentally, from the same anthology - Uncage Me edited by Jen Jordan, pick that shit up if ye aint already). Now for three hours of rest and it's back on the road tomorrow to Corydon, IN. Scott and I will be reading along with Kyle Minor, Matthew McBride, Rod Wiethop and some dude called Donald Ray Pollock at Frank Bill's Crimes in Southern Indiana party. Kinda love the name of the place we're at too - Beef O'Brady's. Thinks I'll read my story Amateurs from the brand new Crime Factory antho which will be available at the event!

This morning I'm trying to make a comparison between Dave Zeltserman's A Killer's Essence and the Tom Hanks cop and dog buddy movie Turner & Hooch sound complimentary over at Ransom Notes. Lemme know how I did.

Next week, it's N@B on Wednesday night at 8pm at Meshuggah Cafe. I see crazy times listed on the FaceBook and that's my fault, I suppose. I suck at the FaceBook, but it's 8pm and methinks it'll go late. Duane Swierczynski, Hilary Davidson, John Rector, Glenn Gray and probably a few other folks as they trickle into town. Can not wait.

On the LA trip I finally got a chance to read Roger Smith's fantastic Dust Devils (had no idea Disaster Zondi would be back in this one!) and Simon Logan's gloriously grimy Katja From the Punk Band. Get your international crime flavoring vitamins. They're good for you. Nicolas Winding Refn's James Sallis adaptation, Drive is out next Friday when I'll be hip deep in Bouchercon, but that will be a priority to catch up on.
Posted by jedidiah ayres at 7:26 AM

Labels: NoirBar, Patting myself on the back, Ransom Notes

Very informative again, Jed. Off to read your piece on Zeltserman