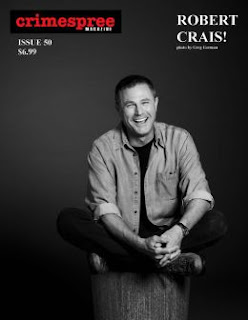 Big congratulations to Jon & Ruth and Jen and Jeremy and Ayo and... All the regulars - Sean, Reed, Craig etc.... on fifty issues of badass crime coverage in Crimespree Magazine. And lookee there, it even made Robert Crais smile.

Made me smile too as it contains a swell notice for A F*ckload of Shorts. That Tim Hennessy, he's got taste. Taste and looks (really dreamy eyes), but back off ladies, he's spake for. Make that taste, looks and a knack for making me sound much smarter and more intentional than I am. So, thanks, Tim and again, huge congrats to the whole team. BTW - did you know that you can get Crimespree for you Kindle or NOOK as well? Well you can. 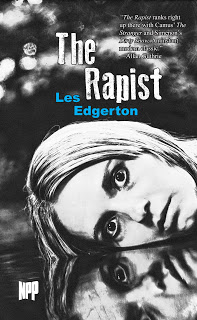 Y'know who else has some nice things to say 'bout Shorts? Les Edgerton, that's who. Thanks, Les. Here's what he had to say. And Paul Brazill dropped some kind words on Fierce Bitches at his spot. Ooh, and see there, he recommends Les' brannew The Rapist too (as do I). Paul's got issues. 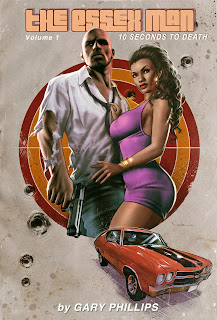 Speaking of issues... as in social ones - ills and the ilk. Gary Phillips has got a brand new man of action and mystery ready to heed mysterious calls to action and confront societal sickness with a license to ill. The Essex Man is the first of a new series featuring Luke Warfield described as part Shaft, part Batman (and part Jay Gatsby). Shit, I'm there. This is probably as close as we'll get to a Phillips Men's Adventure series, and I don't mean that as a slight. Of course my first thought, and probably yours too, when the Men's Adventure genre is introduced is - bad writing. But I posit that Phillips could be the man to redeem the form - delivering punchy, brief, topical badassery to your eReader. I'll give the eReader this - serials and short series like Essex Man, or Dave Zeltserman's The Hunted, and David Cirillo's Terminal are not only a twinkling reality, but a growing light in the fiction fields where I like to frolic. 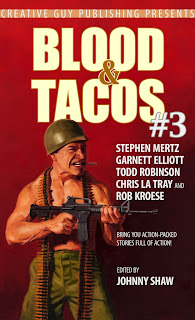 On the other hand, if you don't mind bad writing, and you kinda miss the Men's Adventure paperbacks that used to dominate magazine and book racks (before they were three or four hundred pages long and cost upwards of $25 - C'mon, Lee Child is writing Men's Adventure, and making a mint. Jack Reacher is totally a MA hero - and that's not a slight, but... so    many   words... so   many   dollars), get yur mitts on Johnny Shaw's pulplication Blood & Tacos - bringing back to life the beautiful badness in all-new, re-published (for the first time) tales of men being manly. And if you're too manly to read then you can experience B&T as a podcast! So far, only three episodes (featuring Chingon: The World's Deadliest Mexican, The Chemistrator and The Albino Wino - thanks to Johnny, Rob Kroese and Cameron Ashley for digging these brand new forgotten gems up).
Posted by jedidiah ayres at 10:03 PM