The Impotence of Being Earnest 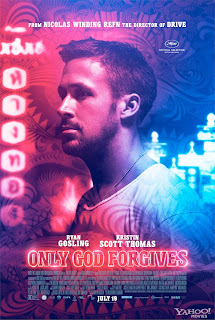 I know it's not getting a terribly wide release, but it's available through a host of streaming platforms to rent or purchase, so I hope that when the box-office receipts call the Nicolas Winding Refn Ryan Gosling vehicle Only God Forgives a huge flop on Sunday,  you, friends, will be counted among the few that got out to support it or hunted down an outlet to experience this one through.

I hope for your sake because I think you could have a helluva great experience with it, but I hope too for the sake of cinematic arts. Yeah, it's got a big sexy movie star in it (and looking like a sexy movie star throughout - every fucking frame of this dude has potential to be an iconic image someday), but it's a good, long way from Gangster Squad or Crazy, Stupid, Love (the same way Blade Runner must have felt like a big ol' wet blanket draped over Raiders of the Lost Ark thirty years ago), and it's a damn site better than most anything out there currently gobbling up the summer movie bounty.

I'll have more to say next month in the July round-up, but I wanted to get out in front of this much-maligned picture up front and be clear that I'll give it a big thumbs up. Fans of David Lynch, Sergio Leone, Takeshi Kitano will find something worthwhile here. As will fans of Sam Peckinpah who dedicated a lot of time to deconstructing the American mythos of masculinity.

Scott Adlerberg nailed it tonight with this observation:

Funny, the abysmal reviews I've seen in NY papers of Only God Forgives. These geniuses write as if Winding Refn meant to make a typical thriller, and failed, or should have made a more conventional thriller, when that is so obviously not what he had the slightest intention of doing. Clearly Only God Forgives is a dream movie. Everything about it, from the languorous way it unfolds, to the lack of logic in the story, to the over the top violence, to the sleepwalking manner of the actors... That Winding Refn dedicates the film, at the end, to Alejandro Jodorowsky, should make it pretty clear what kind of film he wanted to make.

Perhaps Scott read comments like this one from Jeffrey Wells:

Anybody who'd think this was a macho fantasy only watched the trailer. Gosling's impotence is perhaps his most distinctive character trait - and that climactic fight between he and Vithaya Pansringarm says it all. No dudes beating off imagining themselves as that guy.

Hyperviolent? It's violent, yeah, and perhaps that's not your cup of tea, but that's not really a criticism. Be like calling a slapstick comedy "very silly." It's a crime flick, man. If it's not violent, something's wrong.

Ethically repulsive? Terrible people and terrible events occupy a lot of screen time, but I'd hardly say they were endorsed by the film makers. I'm trying to find a way to let him off the hook with this one, but... What exactly was ethically repulsive? The actions of some characters? Absolutely. The attitude of the film toward them? Not at all. Sure, it's dealing in extremes, but the fact that the cop is basically embodying the wrath of God in hell, I found its moral center pretty righteous. Are we little children here? Do we really think that the pretty face on the poster, the main character, has to embody admirable qualities? Yeah, it's the antagonist who's the hero of the flick. Get over it.

Deathly dull and snail-paced? Just a stylistic choice, man. Maybe you'd say the same thing about Sergio Leone, Takeshi Kitano or the aforementioned Blade Runner, but I, the hell, wouldn't. I was riveted.

Possibly woman-hating? You can't throw that out there and not back it up. Just a lazy way of triggering a knee-jerk reaction from readers. What the hell does that even mean? Again, the actions and attitudes of the film's main characters don't necessarily echo the film's attitudes.

Mr. Wells didn't like it. Fine. Plenty of people won't. But for those with a more adventurous than average film-going spirit, or a tempered palette, it's well worth a go. There is a lot of onscreen unpleasantness, but it's also gorgeous, sure-footed and not in the mood to explain or defend itself. Maybe I should let it stand too...

I liked this one a bunch.

I also liked this interview with Winding Refn at Grantland.
Posted by jedidiah ayres at 11:07 PM