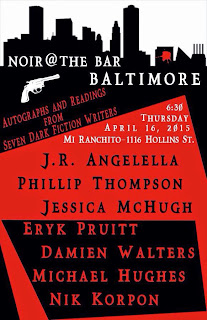 At N@B-Chicago last week I read a story partially involving the Ferguson riots of 2014. It felt a sadly appropriate selection given the continued unrest and violence in the headlines coming out of Baltimore. Same shit, different city. Today Brian Lindenmuth has a timely piece over at Do Some Damage about the origins of one of Baltimore's many nicknames, Mobtown while Eryk Pruitt is giving us an account of the N@B event hosted in Baltimore a scant few days before the recent outbreak of passions in the streets. I figured these two pictures said a lot. The first is Eryk outside Mi Ranchito - the proverbial B in N@B - on April 16 and the second is of the same restaurant just a few days later all boarded up. 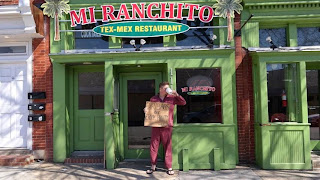 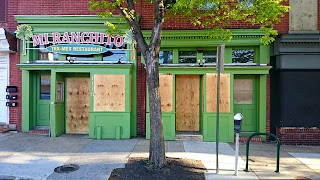 Baltimore has a rough-and-tumble reputation, man. In the past ten years, some of the best stories have come out of there and I'm not just talking The Wire and Serial and anything written by John Waters. I'm talking some real-deal dark stuff and there was no better showcase than the second Charm City Noir at the Bar. The streets of West Baltimore were made that much more unsafe when seven gritty neo-noir writers arrived at Mi Ranchito on Hollins Street to read their shit. 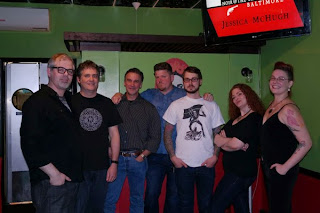 Me, I drove up from Durham the night before. Spent the day checking the sound system, eating Pit Beef and scouring Leakin Park for dead bodies, as one does when visiting Baltimore. But when 7:00 rolled around, Mi Ranchito was packed with people filling up on pork papusas, fish tacos, Natty Boh and margaritas, all ready to hear some stories.

And man, were they in for a treat.

Baltimore's own Nik Korpon served as the Master of Ceremonies. Armed with a mess of giveaways and loads of Baltimore trivia, he kept things lively between readers. 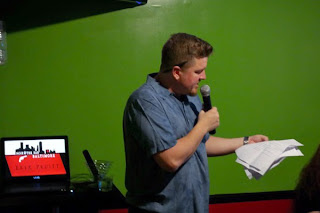 I started off with my short piece Bedtime Story soon to be published in Out of the Gutter online. 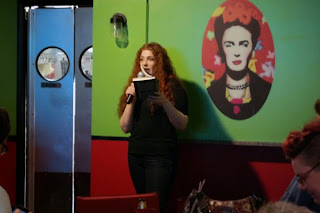 Next, Damien Angelica Walters rocked the house with a selection from Sing Me Your Scars. Great, dark stuff. 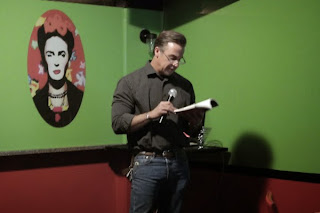 After Korpon scattered the goods amongst the good people at Mi Ranchito, Phillip Thompson stepped up to read a passage from his novel Dark Blood. This is my second Noir at the Bar with Phillip and he can silence a room, man. His delivery of stark, Southern Gothic prose will mesmerize folks no matter where he stands and rumor has it he's putting together a show all his own over in Fredericksburg, Virginia. 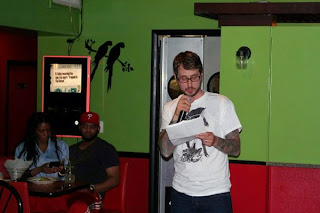 Nik Korpon was up next. After quizzing folks and passing out yet another armload of books (i.e. booty), he read from the first page of his upcoming novel due out from Dzanc books next year. The selection was about a "beat-down boxer and a torch singer who moonlights as an organ thief... so it's kind of a love story." Nik promised and, as expected, Nik delivered. 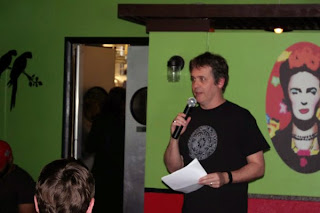 After a short break where folks hit the bar and the merch table, Michael Hughes took his turn with the microphone. Even if you've never read one of his many books or stories, you know him from the best write-up of True Detective, where he introduced us to the "King in Yellow" mythology. For those fortunate enough to witness him in person in Baltimore, he read first from an unpublished short that drew a collective gasp from the audience, then again from an outtake his editor thought was "a little too over the top" for his trilogy. Because it should be seen by everyone, I have included a video. 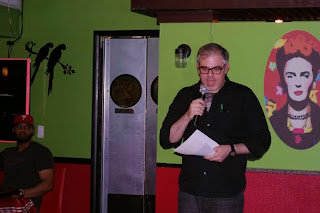 Next came J.R. Angelella, author of Zombie, who thrilled the audience with something new from a work in progress he's calling "his Gladiator Novel." I had the pleasure of kicking it with J.R. for a bit after the event and he's really a great guy. So great in fact, he got John Waters to pose for a picture holding his book, so... 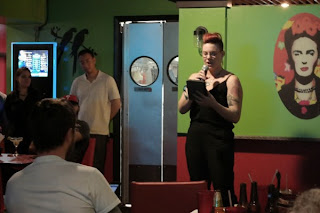 There's a reason Jess McHugh went last... When drawing for order, she suggested her material was better served for when the sun went down, and she wasn't kidding. She read a selection from her latest novel The Green Kangaroo which is based in Baltimore in the year 2099 and features a new drug called Atlys which comes both as a powder and a liquid and our protagonist is a recent escapee from rehab who likes said drug injected straight into his ball sack. No, Jess did not disappoint when she said she had material best read after the kiddies have been sent to bed. And her delivery had the room in stitches.

When the evening ended, folks stuck around for a few more rounds of drinks before heading back to safety and we're both pleased and disappointed to announce very few casualties for the event. Phillip Thompson brought bleach just in case we needed to taint any DNA, but it wasn't necessary. I myself stayed the night two doors down with venue organizer Dan Morrison and woke up to a hole in the ceiling. Stayed the weekend and the day after I left, riots broke out. I do not claim responsibility for either.

I want to thank Jed, Dan, Mi Ranchito, Lana, Nik, Jess, Phillip, J.R., Michael, Damien, and my bartender Bianca. I also want to thank everybody who came out to hear us read and a big-time thank you to Faidley's Seafood and Chap's Pit Beef and the city of Baltimore.

That shit was fun. 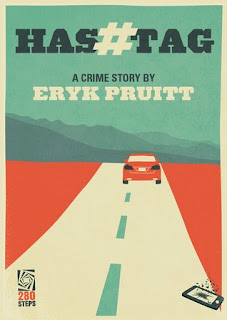 Eryk didn't mention it in his piece, but if you read his novel Dirtbags last year, you're gonna wanna put yur mitts on his new one Hashtag when it comes out soon from 280 Steps. Keep up with Eryk and his twisted shit at your own peril.
Posted by jedidiah ayres at 8:54 AM

Family commitments prevented me from attending the Baltimore N@B a few weeks ago. Reading how it went down, I'm doubly sad I missed it, but happy for all concerned it was times for when it was.

Thank you for your interesting and informative blog. I have enjoyed reading it and appreciate the work you have put into it. Here is some relevant information for you to review .
Kids Tactical Vests