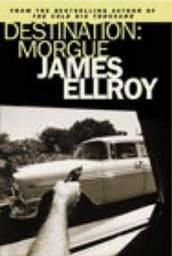 Big books scare me. Poop my pants, scare me. When checking out a new author, I will usually go for a short story or their shortest book on the shelf and only from there move on if merited. Consequently there are many authors I've never tried because I'm too intimidated by the size and density of their tomes. I will probably never read David Foster Wallace. Sue me. Every once in a while, for unknown reasons, I get a motivational kick in the ass and tackle one of those big bad boys. Sometimes I have my carefully constructed prejudices affirmed. Then every once in a while they get broken. Badly. Nearly unrecognizably. I knew I would dig James Ellroy long before I gave him a try, but his books just struck me as dense. Then one day I picked up White Jazz. It didn't matter that I'd started at the ass end of the L.A.Quartet or that I'd seen Curtis Hanson's masterful film treatment of L.A. Confidential (which contradicted some plot points of the book cycle), I was hooked. I'd dabbled with some gateway literature, mostly pastiche or P.I. stuff, but once I'd had a taste of the hard stuff, it was over for me. I'd been right about his books too, D-E-N-S-E and long? Uh, yeah. But what I hadn't counted on was how badly he'd punish me and how much I'd not want him to stop. I ripped through his entire catalog at a record setting pace, (for me - I'm slow) and then The Cold Six Thousand landed and I was all caught up. I wolfed it down carelessly without regard for the coming eight year wait for the Underworld U.S.A. trilogy's capper. Eight years?!? Somewhere around 2003 I was beginning to shake and sweat and by the time Destination Morgue! came around the next year, I'd learned my lesson - tried to parce it out - a short piece here - a short story there, but there was no way I could've made it last five years. Folks, we are two weeks away from Blood's a Rover, (like I needed to tell you), and I'm a wee bit excited. Contemplated re-reading American Tabloid and Cold 6K, but my tbr pile is too intense to seriously consider that. Think I'm going to have to just jump in and swim.

And now it's time for the next HBW contest, the winner receives a UK hardcover edition of Destination Morgue!

It's been nearly a year I've been running this here blog and though I still feel sometimes like I'm firing these transmissions into the void, there was a period when it seemed I truly was. Nobody read my little posts and I cried and cried. One post in particular I thought would create a nice conversation garnered exactly zero comments or emails and yeah, I cried and cried. But now friends - the contest.

According to HBW, The Big Lebowski was a quasi sequel/remake to/of what FILM (not the book)? Want a hint? You gotta read an old post... A much older post. Like um December old.

E-mail me the answer and should there be more than one of you out there reading and caring about free Ellroy books, I will select a winner at random from the entries on Sept. 22, (when Blood's a Rover drops).
Posted by jedidiah ayres at 5:57 PM

Destination Morgue is one of the few Ellroy's I actually enjoyed. I also liked to one about the accordian player. The Cold 6000 was quiet good but he need an editor.

What sacrilige! Editor? Check out the balls on Brazill. Dick Contino's Blues - yeah, I liked that one a bunch.

I have a source at the State Department who confirms Mr. Brazill has a team of specialists buff his impressive pair at "Serwowanie Raju", a bowling alley of some repute outside of the hamlet of Gniezno. True story.

Why do so many people hate the cold 6 k? I've read that fucker 3 times and still don't get tired of it

Hey when your mother gets murdered and your books turn into movies and your screen plays become adapted to film people can say whatever they want, the talent speaks for itself....