The Streets of Philadelphia 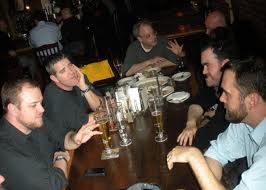 Anybody who hasn’t already should truck on over to Do Some Damage and check out Steve Weddle’s recap of NoirCon 2010. He captured the vibe from my coin-fed bed pretty well. Over at Ransom Notes, (where there was an unfortunate spell check incident), I’m giving a quick highlight of the panels, but I’ll go through the offscreen bits as best I can recall here. Friday morning had coffee with Kieran Shea, then met Cameron Ashley and Vicki Hendricks in the hotel lobby and walked as a foursome to the Pornography in Noir Fiction panel that featured Christa Faust and Jay Gertzman. Says I to Hendricks, “Whyfer you not onnit?”

Cut out after lunch for to walk the streets of Philadelphia, with Ashley and Anthony Neil Smith, but we never saw The Boss. Ended up in a German joint with hausfrau outfits for the waitresses and foamy, fermented ‘freshments for those with coin. Once Cam was properly sauced for his gig moderating a panel with David Corbett, Seth Harwood, Reed Farrel Coleman and Vicki, we headed back to the venue. Lemme just say that drunk is probably the only way you could get me to step between Corbett, Coleman and Harwood when their blood is up. And it’s always up. Because I’m such a good friend and not at all fraidy, I bailed and walked back to the hotel alone.

In the lobby, hung out with Ed Pettit, Scott Phillips, Megan Abbott, Duane Swierczynski before our night at the museum. Dinner was schmancy that night plus an open bar. I sat with Steve Weddle, Calvin Seen, Owen Laukkanen, Libby Cudmore, Matthew Quinn Martin, (a fellow Beat to a Pulp contibutor, no less) and Nik Korpon, (a fellow Out of the Gutter 5 contributor). Talked a lot about The Shield with Cudmore who’s a Walton Goggins fiend. Hilary Davidson showed up sometime around there and it was great to finally meet her. Weddle forced three whiskeys into me then he and Ashley goaded me into starting some shit with George Pelecanos. Yeah, he used to box. Opted to walk back to the hotel from south Philly. Disturbingly sober when I arrived. Stayed up till 3:00 with Ashley, Shea, John Rector, Stacia Decker and Weddle. Still had a hard time getting to sleep.

Breakfast with Tafoya and company in the morning, then drank NoirCon coffee by the pot and scarfed donut holes in the lobby with Korpon, Cudmore and Martin. Wandered the streets more with that crew, subsisting on coffee and milkshakes, (what happens in Philly stays there). Realized that those three all teach writing and didn’t have to seduce their high school principal in order to graduate and I felt entirely outclassed.

Best panel of the Con followed. Anthony Neil Smith and Megan Abbott discussing revisionist history of noir. Wish there were a podcast available. You missed out. 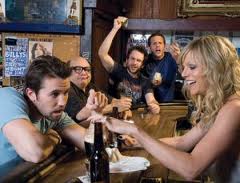 Somehow, I developed a powerful thirst after that. I wasn’t alone. Ended up in Paddy’s Pub with Shea, Decker, Smith, Ashley, Weddle and Rector. Some people ate food. The fools. After my Irish supper we headed back to the hotel and was again frighteningly clear headed upon arrival. Course corrected in a shotgun bar with Nik Korpon, Dennis Tafoya, Scott, Cam, Don Lafferty, Roger Petersen and Weddle. When the world really started to tilt again, we walked back to the hotel. Again. Stone cold sober by the time we arrived. Hung with Weddle, Ashley, Petersen, Stacia, Hilary and her husband, occasionally ducking out for pizza until we were booted from the bar at 2:30. Haunted the fancy sofa in the lobby with Ashley and Decker till 4 in the morning.

Up again at seven and took a coffee shower with my roomy Shea. He got me really worked up about his novel in progress. It’s gonna be so awesome. I have two syllables for you: KO KO. Also he’s naming a character after me, as is Swierczynski, come to think of it. Across the table from us, Duane asked me and Cam who wanted to be the prisoner and who wanted to be the guard. You always say ‘guard’ when presented with those options. Looking forward to further besmirching the family name in one of his books..

Proper breakfast with Phillips, Tafoya, Ashley, Davidsons, Decker, Peter Rozovsky and more braced me for the day. Took in one more panel and lots more bullshit with the previously mentioned crew members. Lunch with Vicki Hendricks and Joe Samuel Starnes then off to the airport. On the same flight with Phil and Patti Abbott who helped me stay awake in the terminal and then very self-servingly wished me a safe trip. By the way, my parting image of Philly was a guy walking a dog down the street and wearing a Michael Vick t-shirt. Gotta love it.

In my absence, Rod Norman posted an interview with me over at Signs & Wonders and sent me an email about his trip to see William Gay over the weekend. Good for you, buddy. Glad you got that since NoirCon was a wash for you.

And where the hell were all of you?
Posted by jedidiah ayres at 7:07 AM

Labels: pals, Patting myself on the back, Ransom Notes

On the other side of the mundo. Damn, it sounded like fun.

It was nice sitting with you Jedidiah and everyone else. You have an interesting perspective on things. I hope to run into you again in the future.

Calvin - nice to meet you and your brother. See you at the next one?

I'm working on some crazy stuff that you may see in the future. Like even crazier then the one in CF5. Are you currently working on anything? I know this is off topic but I can't seem to contact you in another way.

Substantially jealous over here on these west coasts … Damn fine time, it seems it was.

That’s a hell of a title for something, mate. First story in Noircon Noir?
======================
Detectives Beyond Borders
"Because Murder Is More Fun Away From Home"
http://www.detectivesbeyondborders.blogspot.com/

Calvin - check my profile on the right side of the screen. My e-mail address is listed there. Can't wait to see the new stuff.

Greg - Mr. Heart N Soul. Just re-read Crazy Larry in By Hook or By Crook... Gawsh we need some of that at N@B. Get yur ass out here.

Peter - thanks for the classiness

Classiness? Classiness? Man, I’ll have to act way worse at future cons than I did at this one.
======================
Detectives Beyond Borders
"Because Murder Is More Fun Away From Home"
http://www.detectivesbeyondborders.blogspot.com/

I enjoyed this summary even though you didn't mention you sat with me...not that I'm anyone worth mentioning. (We, well mostly you, talked about Ken Bruen while waiting in line for our dinner at the Mummers' Museum.)

Chuck, I think you're the guy who interviews books on Mostly Fiction. I was nervous with all the fancy classy stuff that I have never experienced before so I mostly kept to myself. My brother Vincent was too. It was an honor to have shared a table with you.

Nice to spend a half hour with you at the oddly uncommunicative Philly airport.

Good stuff. I must visit youse guys at the bar of Noir.

Hey.
Noircon 2012 will have a noir bar crawl with the mandatory baseball and hurley bats provided. Noircon lives on!

Sorry Chuck - How great was that spread though? Everybody already checked out the Mostly Fiction site for reviews http://bookreview.mostlyfiction.com/ ?

Don/Lou/Patti - great finally meeting all of you

It's not noir without hurley bats! Maybe some axe handles for good measure. Great recap, and excellent times hanging out with you guys. I'll definitely have to be at Boucher, etc.

Excellent hanging with you, man! Hope we can do it again before Bouchercon.

I certainly missed out. Sounds like a blast, man.

Dennis - you know where I live

Gordon - and a half

Jed, Sorry I missed it, maybe next year but it sounds like you had a blast. Meeting William Gay was incredible. Best Rod

good times
almost everyone i met was pretty cool

Steve - almost? Are you gonna git all controversial here?