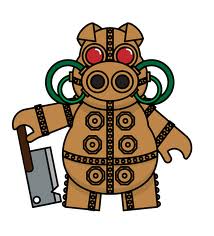 Ready for the list? The lineup for Surreal South '11 just dropped and who-ee it's strong. Aside from my own contribution, look for stories from N@B vets Anthony Neil Smith, John Hornor Jacobs (and editors) Laura Benedict and Pinckney Benedict as well as HBW friends Brad Green, Sophie Littlefield and Nik Korpon. Back for another round are SS09 folks like Alexander Lumans, Michael Kardos, John McManus, Josh McCall, Josh Woods, J.T. Ellison and Sheryl Monks and from SS07 Susan Woodring. Then make way for A.K. Thompson, Anne Valente, Gregory Wolos, James O'Brien, Jim Walke, Julia Patt, Marilyn Moriarty, Mark Fleming, Reuben Hayslett, Robert Busby, Robert Hill Long, Ron Lands, Rose Bunch and Victor Schultz. Nice.
Over at Ransom Notes I'm talking Michael Robotham's latest The Wreckage. I'd never read one of his before, but he was on my radar, and while it's not the kind of fare I usually pick up - it's long (like over 300 pages - yeah, that's long for me, what the fuck you lookin at?), it's international intrigue and a conspiracy thriller while I tend to like my thrills and chills on a smaller scale - it's a damn fine representation of the genre's potential. I've always wanted to give Nelson DeMille or Tom Clancy a try, but absolutely wilt at the sheer size of their tomes - so, this one is what I'd like to believe theirs can be too, (though, that's probably completely unfair to all three authors.)
While supporting the recovery of my amazing wife from a minor surgery this week, I've been watching a bunch of movies. In one 24 hour period we sat through about ten episodes of Patrick McGoohan in Danger Man, Roman Polanski's The Ghost Writer, two episodes of Treme Season One, Sofia Coppolla's Somewhere, Nic Cage in Drive Angry, Jason Statham and Ben Foster reprising the roles of Charles Bronson and Jan-Michael Vincent in The Mechanic, The Coen Brothers' slice of awesome The Man Who Wasn't There and Christopher Smith's Black Death - after that one and Severence, Smith is on my go-to for off-balance horror films every time list.
Posted by jedidiah ayres at 11:31 AM