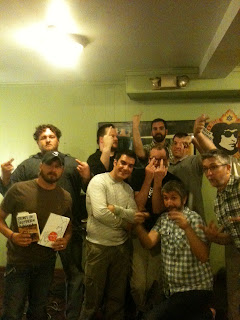 Can I take a moment to pat the N@B community on their collective back? Over the years, I’ve been to some very nice literary events, some with absolutely 100%  spell-check approved and correct grammar usage. I’ve been to some dull ones and even a couple that took amazing material and snipped its nuts with atmosphere and culture, but before last night’s N@B event, I had never been to a reading where one author stops mid-paragraph on his story and tells the next reader that he would like to fuck his muscles, much less one where said erotically-muscled-reader’s piece includes a passage about literal muscle-fucking, (tendons maybe, or some such viscera –weird though, yeah?)

I love our event. You should make a point of attending some time.

Glad to see that the change of venue didn’t throw the community into chaos, (or rather turn our pleasantly chaotic little group into a bunch of well-behaved line-standers). In fact I got several politely phrased suggestions  to keep future events at Meshuggah, and as the next one (August 6, with Jesus Angel Garcia, author of badbadbad, David Cirillo and Jane Bradley, author of You Believers) also takes place on a Saturday, we just may have it there again.

The evening got off to a righteous start with John Hornor Jacobs reading a tale of Pentecostalism run amok somewhere beneath the Mason Dixon line and was followed by Aaron Michael Morales’ tale of a young boy’s first pubes , cage fighting and y’know, arrow wounds. Fred Venturini read two pieces, a marriage tale with a side of serial-killer fascination/fandom and an excerpt from his novel The Samaritan, featuring inanimate-object violation of a human being, murder and suicide, (I kept thinking about the Stephen Graham Jones blurb on his book claiming that reading it, “was like finding an autobiography I forgot I’d written,” hmmm… Steve, I’m sorry about your life, dude.)  Not to be out-transgressed, Frank Bill read a lovely piece about a family’s final breaking point, which is apparently when incest turns to pimpdom and handguns are suddenly remembered beneath pillows or beside oxygen tanks – the things we do for health care. 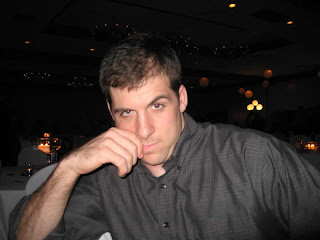 In attendance I was amazed to see former N@B star Daniel O’Shea had hauled his lovely wife all the way from Chicagoland, but not so much that Matthew McBride had the Mrs. in tow from about a hundred miles out. Rod Norman and his better half Judy led the last century mark of miles in the caravan that included Misters Bill and Morales, and local past and future N@B inductees Matt Kindt, David Cirillo, Mark Tiedemann and Erik Smetana lent the proceedings  a veneer of classiness just shiny enough to lure other wives, friends and passersby into our whimsically debauched company. For that we are thankful. Now, if they can do it again we’ll really be doing something special.

Thanks of course to Kelly and Subterranean Books who’ve just announced that indeed they will be remaining open, (though they might be moving from their current location on The Delmar Loop). With events like last month’s Steve Earle read, N@B, Tim Lane’s monthly Whirling Gypsy Cabaret, BYOB and of course July 20th’s Donald Ray Pollock signing making a pattern of #winning, I hope to keep shopping there for a long time to come.

And y’know what I’m looking forward to purchasing there?

Yup, the N@B antho, which should be available at our next event. Alright, I’m putting it out there. And lemme tell you, I’ve read the collection of stories and they are all over the map, tone, subject and story-wise, from hardboiled to kinda runny and on to rotten and nearly hatched, but the single thing that binds them all together is the history and seat space they share on the literary-short-bus  we call Noir at the Bar.

Posted by jedidiah ayres at 6:04 AM

Jed, Thanks for the wrap up for those of us on the East coast. Wish I could have been there. Someday.

It was sweet and heartwarming.

You guys have all the fun!