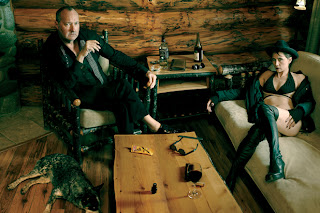 Over at Ransom Notes I'm all about Hell & Gone, the new Duane Swierczynski prison novel that's part two of his Charlie Hardy trilogy. Trust me, it takes something from every prison novel ever written and is like no prison novel you've ever read. It also features a character named Jed which I don't think happens often enough. However, after Megan Abbott's The End of Everything, maybe it's becoming a thing. Also at Ransom Notes is a list of uh, lists that I've enjoyed of late from folks like Duane, Matthew C. Funk, David James Keaton and Jordan Harper. Hey, Jordan - please tell me you're including Weird Al Yankovic's Good Old Days on your Murder Ballad a Day list - really quite unsettling. Do you remember sweet Michelle?
Fuckload of Scotch Tape is now three days into production! Julian Grant and Co began shooting that beast Friday, and yeah, I'm pretty excited. Check out some production stills and behind the scenes shots (like this one) at the FLOST FaceBook page. 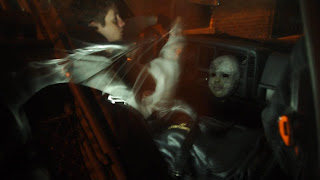 Whoa. Did the temperature just drop?
Got my copies of Surreal South '11 in the mail Saturday. Good shit. I'm officially recommending it to you. Did you know I had a contribution to this ghosts & monsters collection? Yup, me and N@B folks like Anthony Neil Smith, John Hornor Jacobs, Pinckney Benedict, Laura Benedict and Sophie Littlefield (she was totally at the last one - you missed it). Hey, it's also got swell writers like Nik Korpon, Josh Woods and J.T. Ellison, so, yeah, what are you waiting for?

Finished season three of Sons of Anarchy over the weekend, a show I'm conflicted over like nothing else. On the one hand I think it's one of the richest set ups on TV, and one of the best opportunities to explore outlaw life in modernity to come along... ever. As much as I love The Sopranos, I'm really not drawn to organized crime with that level of sophistication as much as I am to the cowboy spirit of biker gangs, plus hey, staging Hamlet on bikes is inspired, and I'm willing to go through the soap-opera-ish relational dynamics in support of the heightened reality that that kind of theme implies... but the characters tend to feel inconsistent rather than complex and too often the badassedness comes off comical rather than y'know, badass. While season three saw Jax get thankfully more coldblooded, it also saw Tara kill two people (who didn't even have it coming) and... have no real effect on her mood let alone her life. The finale did what it was supposed to - took a few bold steps that got me interested enough to tune back in for season four, but I still feel it could be a lot more than what it's given me so far.
Posted by jedidiah ayres at 7:38 PM

There's a character by the name of Jed in my story in the BTAP: Hardboiled anthology, too. Maybe the name is making a comeback if a distinguished taste-maker such as myself is using it.

We should talk about SOA sometime. I just finished S3 as well and aren't honestly sure what I make of it.