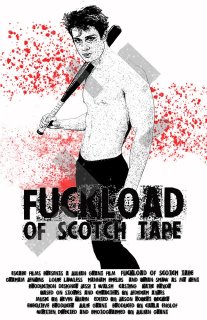 Hey Minnesota you wanna see Paul von Stoetzel's short film Viscosity based on my short story of the same name? Well, you can catch it for frees on the larger than average screen. Here's the PSI:

Our filthy short film VISCOSITY will be screening at IFPMN's Cinema Lounge Wed May 16th. The event is the 3rd weekend at the Bryant-Lake Bowl Cabaret Theater. If you want to mock, ridicule or ask the questions you've pondered regarding this degenerate piece of work there will be a Q & A with director Paul von Stoetzel following the screening.

He said he's a bit anxious about answering questions about the film at the Q&A and even that the film, which screened earlier at Z-Fest and apparently inspired some 'feminist hate mail' which makes me more than a little bit happy. Finally, somebody cares enough about something I had a (cough) hand in to express their passion in printed words.

Also screening in May is Julian Grant's ambitious noir-sical Fuckload of Scotch Tape inspired by a couple stories of mine. It's a cast and crew screening in Chicago May 29 - but hey, it's a screening. FLOST'll be making the festival circuit this year and I'll announce any dates I hear on opportunities to catch it... like a virus. Know what else you might find catching? Kevin Quain's soundtrack. I'd love to see this one with an audience. 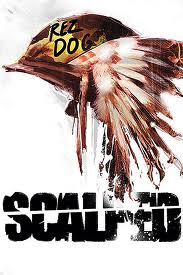 Over the weekend I got my nerd on and jumped at the chance to meet Jason Aaron who signed some Scalped for me at Star Clipper Comics on Free Comic Book Day. Then I read Peter Farris's Last Call For the Living yesterday and I'll be asking him a few questions about it soon for the bloggedy, but lemme just kill any suspense I've just introduced and whole-heartedly endorse the hell out of that shit. Nasty bit of bank robbing, snake handling, Aryan Brotherhood crossing, head stomping, foot smashing, cat killing, hostage fucking fiction. Go sell badass somewhere else, we're all stocked up here.

In the wake of Matt Kindt's Spinetingler Award win for his Noir at the Bar cover, I'll take this opportunity to spread the word about the next book. Yeah, 'cause we're such suckers for punishment, Scott Phillips and I will be publishing yet another volume of nasty short fiction from the annals of N@B, tentatively titled Nair at the Barrio (no, it's not). In the next couple weeks I'll be diving further into the submissions, but holy crap, brace yourself for Jane Bradley's harrowing piece about drugs, sex and violence and John Rector's gag reflex triggering story of the worst episode of Rachael Ray ever. Also, those of you who weren't there will find out where all the Aaron Michael Morales 'pube' jokes come from, Caleb J. Ross's tale of odd collectibles and marital discomfort will make you double check your sneer, while Nic Young and Jason Makansi offer up adultery from a couple different angles and Kevin Lynn Helmick's James M. Cain love-letter ought to have you good and ready for The Cocktail Waitress.


Finally, I'd like to address the rumor that I only own one shirt... 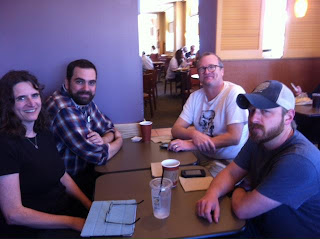 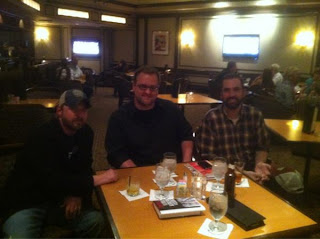 With Mr. Bill and Duane Swierczynski 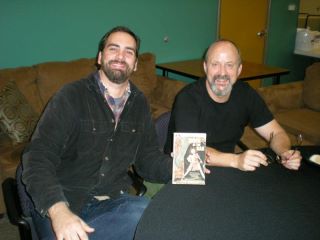 Wearing it beneath the shirt coat next to Daniel Woodrell. 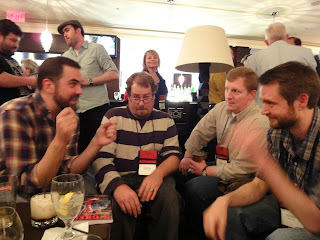 At the bar with Thomas Pluck, Cameron Ashley, Keith Rawson, John Kenyon and Frank Wheeler Jr. I like how Frank and I look like mirror images of bearded, plaid-shirt-wearing, fist-pumping gargoyles in this shot.

Uh, pretty much. One shirt. And it's just about worn out. Looking for a replacement.
Posted by jedidiah ayres at 9:11 AM

Should I start a New Shirt Kickstarter Campaign?

unless you wanna see my naked tits in the next photos

I had a roommate in college who had a closet full of identical clothes. About a dozen black T-shirts and blue jeans, all the same. Wore the same thing every day, unless he had some kind of convention to go to, in which case he'd wear something with a less obsessive-compulsive vibe.

I agree with Jean-Pierre Melville's statement that what people choose to wear is their own kind of armor against the outside world.

Congrats on the premier, and very cool pics. You guys always look like you are having so much fun. Best of luck, Jed!

It's true. Jed has one shirt, but it has amazing Swiss Army knife functionality. Rumor has it he once delivered a baby using the shirt as a catching mitt and another time dangled the shirt down a well to rescue seven-year-old Tina Harken. I'm not sure, but I believe KDNL News has Beta SP footage of Jed draping the shirt over power lines near the Anheuser-Busch brewery complex on St. Patrick's Day--fashioning his own zip wire.