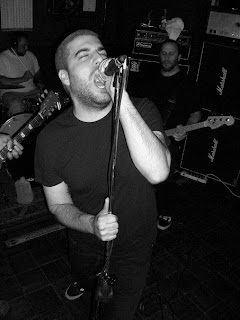 Today at Ransom Notes you can check out a conversation I had with Peter Farris whose debut novel Last Call For the Living is ten kinds of must-read nastiness.

I thought that Les Edgerton's Ransom Notes and HBW pieces earlier in the week regarding the lack of accuracy in prison and convict literature would make an interesting lead-in to my covering of Peter's book - as it deals a lot with prison culture (specifically The Aryan Brotherhood). And does so with an authority that's either well-earned or y'know nicely bluffed. I suspect the former. 'Specially, as there are plenny other areas of interest covered nicely.

In fact - here's what Pete had to say 'bout Les's HBW piece:

I really enjoyed Les' post about prison myths. Spotting one from LCFTL (convicts guarding their food), I figure I should defend myself on that one at least. A good friend of mine in law enforcement had observed that habit, at least by some residents of the Cobb County Detention Center here in Georgia. My cop buddy mentioned that the guarding/hovering behavior he'd noticed from time to time wasn't (in his opinion) because a prisoner was worried somebody would steal their food, but rather body language letting everyone know he's intent to mind his own business and expects you to do the same. It's interesting how the culture and slang varies drastically by region and particularly by state, too. Here's a little tidbit I put in the next novel. At CCDC prisoners refer to their little plastic booties/slippers as "Nikes." I just love that shit.

If Les reads Last Call hopefully he doesn't have a field day looking for false notes. I was fortunate in some respects that my editor had worked with Pete Earley and Malcolm Braly, and also had visited more than a 100 prisons over the years. He had a lot of insight and stories about penitentiary life.

Also in the Ransom Notes piece he makes a bold assertion that Jack London's The Star Rover is the granddaddy of prison lit. Here, for your completist self are some bonus bits to accompany the Ransom Notes interview.

And where did you study snake-handling?

I have no personal experience with it, but not an hour north from the county I was raised in you can still find small churches where I suspect snake handling is still practiced regularly. Certainly near the Tennessee line and out toward Alabama there are generations of families that worshipped that way and still do.

I can remember being a kid in 4-H or Cub Scouts and reading one of the Foxfire books that had a chapter on snake handling and just being terrified. Curious, but terrified. That terror struck me again when years ago I thought to visit an address up in Kingston, Georgia where I learned there was a church. But I lost my nerve. It just felt wrong to sit in on a service, an obvious outsider and non-believer to those people, interested only in how he would stage a shoot-out in their place of worship... I'm not a religious or spiritual person, but there's something to be said for worshipping with such reckless abandon, such fervor, where you lose yourself completely in your faith. It might be peculiar and dangerous, but from what I've gathered most believers are searching for personal salvation. I can respect that.

Not to sound cheesy, either, but I believe I've experienced a similar sensation from my time in bands, especially in the underground metal scene. When you're on stage before a room full of freaks and any sense of self you had just vanishes behind a wall of noise. I could imagine a serpent handler watching me scream and flail and probably remark: "Now that boy is struck by the spirit." 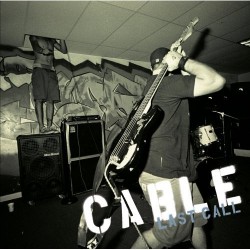 How about the title? Is that a song reference I'm not getting?

Last Call for the Living was actually the title of a rare 7inch from an old hardcore band from Kansas City called Coalesce...who very much came up in the same scene as my own band Cable. I always thought (even before I got serious about fiction writing) that LCFTL would make a great title for a novel. It seemed to take on added significance once I finished the book, particularly in reference to Charlie and Lang.

There was a recurring motif of finding animals dead of natural causes in the wild. What was going on there?

I really don't know to be honest. Probably my subconscious at work, coupled with a practical concern when it came to characters roaming remote mountain woods. In north Georgia we've got everything from black bear, whitetail deer and coyotes to feral pigs. Chances are you get deep enough into the woods you're going to come across animal remains, shed antlers, bones, etc. If a reader is compelled to give that motif certain significance I'm all for it, and would welcome all interpretations.

The instances of coming across dead animals in the wild surprise the tenderfoots in the book as well as those among the readership who lead relatively comfortable and insulated lives, I'd bet. Every living thing dies even if left to mind its own business is a fact that nobody but our characters like Hobe Hicklin seem to be aware of. Coupled with a title like Last Call for the Living (time's running out, kids) it all brings about a very Roy Batty Bladerunner vibe "I want more time, fucker... All these moments will be lost in time like..." But before everybody starts tearing up - Life may kill you, but only if your friends or enemies or family don't first - so stay hard - it's last call - belly the fuck up.
Posted by jedidiah ayres at 6:36 AM

Enjoyed both posts, and Pete's book is a hell of a good read.

Peter, I look forward to reading LAST CALL FOR THE LIVING and won’t be looking for false notes at all! From what I see, you’re one of the “good” guys who try their best to get it right and that’s a big thing. The ones I have a problem with are those who don’t make the effort and simply assume they know what they’re writing about from watching bad movies and bad books and don’t bother to find out what’s real and what isn’t. And, I hadn’t heard that reason for guarding food by prisoners. Something I haven’t observed during my time inside nor on my visits over the years. I wonder if perhaps that isn’t something one might see in jails or detention centers instead of prisons. And, jails and holding/detention centers are vastly different than maximum security prisons. Detention centers are more like federal joints which are also vastly different from state maximum security prisons. And, jail is nothing like prison except superficially. There are bars… and that’s about it…

Your editor also sounds like one of the few who make a serious effort to learn the truth. Good on him or her!

Reason I don’t write from the cops’ pov (except in one book, but I wrote the character as a renegade cop) is that I don’t know their perspective well enough. I could interview them all day long and ride along with them and do all that, but just like a cop trying to understand the prison experience, there’s no way I can approach that level of knowledge without being a cop. Most cops and most hacks in prison really don’t know the con’s perspective at all, although more than one think they do, especially hacks because they work inside. Doesn’t matter. There’s just absolutely no way a guard can genuinely know the convict’s experience. Only one way to gain that and it isn’t by being the zoo keeper. The head of NASA most likely feels he knows a lot about space, but unless he’s been an astronaut and gone to the moon himself, there’s no way he knows what space is like except in a superficial way. Just the way it is.

I really do look forward to reading your novel, Peter!

Les - I think you'll dig Last Call For the Living and when are you coming back to St. Louis, it's been too long!

I appreciate it, Les, and thanks for offering your insight. It's hard enough selling the lie just right in a novel, but your post on prison myths serves as a reminder to anyone (myself included) writing crime fiction that there's no excuse for laziness. And your point is well taken. From the folks I've talked to, that disparity in the culture at Georgia's toughest state pens like Reidsville and Hays to the county detention centers and then say a place like the USP in Atlanta is pretty pronounced...each facility a little petri dish, with its own slang, politics, and ecology.

No doubt you'll come across certain exaggerations and embellishments in LCFTL but hopefully nothing that undermines the all important story. Jed recommended some of your work. I can't wait to read "Just Like That."

Well, shit, and I just caught a reference to a "shiv or shank" in LCFTL. And I knew better, too. Thank god there's gonna be a paperback.

Peter and Jed--Just finished reading LAST CALL FOR THE LIVING and... it's a terrific, terrific novel! Couple of little, very tiny glitches as far as con language/culture, but not a single thing that detracted. Just a great story.

Hope you're working on a new one, Peter--I want to read more of your work, dude.