Man Out of Prison: Coastlines

Counting down to the Netflix release of Evan Katz's adaptation of Dave Zeltserman's Small Crimes I'm looking at some of my favorite in the man-out-of-prison subgenre. Today it's Victor Nunez's Coastlines. 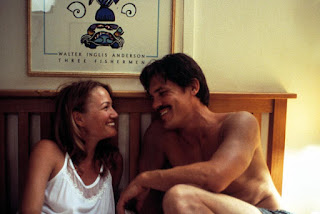 If you know Nunez's work you know what to expect - strong ensemble performances, thoughtful script and a measured pace that quietly ratchets those stakes. If you don't know Nunez's work and instead looked at the cast and plot - Timothy Olyphant is just out of prison and back in his small town where he has an affair with Sarah Wynter who is married to a local policeman, and his best friend, Josh Brolin. Meanwhile tragedy strikes his father (Scott Wilson) and he tries to collect on a debt owed by local gangsters William Forsythe and Josh Lucas - you might expect more fireworks. It's still a dead-end tightrope walk toward explosive confrontations on every front. 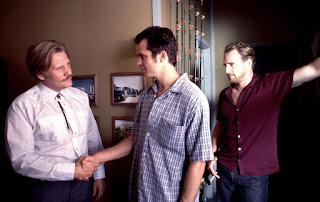 99% of the times this storyline is pitched it's gonna be a slam-bang, hardboiled, badass-a-thon peppered with tough-guy talk and deep-fried in testosterone, but that's not Nunez, man. Laconic and achy-breaky in all the best ways - this one proves the 70s never really died out in American cinema and considering the cast, it's hard to believe there isn't a huge cult around this one... yet.

Seek it out.
Posted by jedidiah ayres at 3:33 PM

oh man, I'd forgotten about Coastlines. Such a good movie. Perfect cast. I think I've liked all that guy's movies. The Peter Fonda honey one, and Ed Harris I think as a reporter and Richard Johnson was in it too -- okay, got it Flash of Green. Good one.