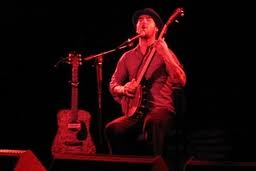 I met Frank Bill a year ago when the crime dog community helped me goad him into making the trip to read at the first St. Louis Noir @ the Bar event with Anthony Neil Smith, Scott Phillips and myself. I wasn't sure what to expect. I'd read some of his stories which were short, brutal, poems of violence uncorked, those that inflict it, those whom it destroys and those who bear up under it. Frank's personal countenance was modest and unassuming. He was soft spoken and you might have even guessed shy... Until he read. He unleashed The Hill Clan Trilogy Part Three on a crowd that had no idea what they'd gotten in to. I spent an evening with Frank and his wife at their home last October and he was a consummate host, giving me a tour of the rugged Indiana locations that serve as the back drop for his stories. And while the tales are dark - as with any quality - it is only worthy of examination when presented in contrast with another. That sums up the appeal of Frank to me, the vulnerability running beneath the surface of his fiction renders what ensues relevant and frightening. He's been published at Thuglit, Plots With Guns, Beat to a Pulp, Pulp Pusher,Talking River Review, Crime Factory, Darkest Before the Dawn and Hard Boiled magazine.

An acoustic guitar strums. A voice of smoke soaked in bourbon, charred by angst and loss begins with a deep pitch of, “In a box made of pine lays the sweet love of mine she’s been gone for nearly a year.” And so begins Pine Box, a song by William Elliott Whitmore from the album Hymns for the Hopeless.

William tells the story of a grieving man reflecting on the bond between he and his deceased wife. The song moves on with, “The river would overflow if only I could trade a raindrop for every tear. It was the year of ought one and our life had begun, no perils could make us distraught. Together we stood through bad and through good, no hardships that couldn’t be fought. ”

William never tells exactly what caused the wife to pass only that, “She fell ill one dark winter’s night and before too long she passed.” But he tells how strong the man’s love for his wife was offering a dark depiction of self loathing with, “It would prove to be true my whole life through that nothing good would last. It all ended that day when I saw her ride away in that long black hearse, I remember so well my personal hell began on this here Earth. I’ve half the heart I used to have and half the will to go on. I’ve got half a mind to drink myself blind now that my darlin’ is gone.”

Mr. Whitmore’s voice never misses a nerve when singing because his songs are torn from a deep well of life experience as he gives a final glimpse of what true rapture can do to a man whose wife is his everything, telling, “Now the winter’s teeth are biting down and it chills me to the bone. To think about that cold mattress and sleeping all alone. So now I know what I must do, the path ahead of me is clear. I must join her now wherever she’s at cause I ain’t doin’ no good here.”

Hearing William sing this tune will bring a bit of moisture to the lower eye if you are a passionate man. Add a few shots of top shelf bourbon and hide the gun, Williams’ voice will hollow the senses and leave you with ache.

What gives William’s songs their punch are his glimpses at real life and its people, combined with barebones acoustic and a voice too mature for his age. The man is a storyteller who can sing. My wife and I caught him opening for Lucero in support of his third album, The Song of the Blackbird. He sat on a stool with a Miller High Life, his guitar, banjo and microphone, the crowd stood awe struck with silence.

This song in particular (I’ve all of his work, his first three albums being my personal favorites) struck a chord in me to write a short story, The Penance of Scoot, some years ago about my grandfather losing his own wife of thirty plus years. The story was accepted by a college journal and should be out sometime later this year or early next year. I dedicated it to William and his music, even wrote him a letter and sent him the short, what a fan boy. Oddly enough he sent me postcard with a handwritten reply while on tour and thanked me. What a musician. 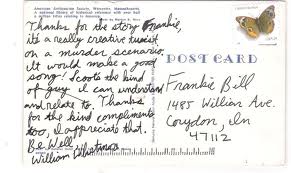 His first three albums, Hymns for the Hopeless, Ashes to Dust and Song of the Blackbird are a trilogy. Focusing on the land in which he was raised (Lee County, Iowa), the loss of his parents (horse farmers) at an early age and some of the characters (Hub Cale) he met while growing up.

His fourth album Animals in the Dark is equally as good, with a focus of what is happening now.

Check William out
Posted by jedidiah ayres at 4:38 AM

Nice how this came full circle. Have to look for his work.

Great way to wind up an amazing series. I've nver heard of Whitmore, but he seems like he's right up my alley, And I always forget how damn lyrical you can be, Frank. Once again, great post

A new one on me but sounds pretty good. Top writing, Mr B.

Frank Bill sent me and I'm glad he did.
Elaine Ash

I can see why Frankie likes his music and lyrics -- there's this beautiful dread to it, with an ache you can nearly taste (just like Frankie's stories). ... Great post

Great post, Frank. Whitmore has to be one fo the best songwriters going, right up there with Biram.