He Say You Brade Runner 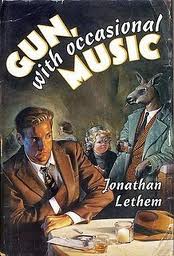 Over at Ransom Notes today I confess my geeked out devotion to Blade Runner and Jonathan Lethem whose Gun With Occasional Music made me decide that I could write a book and whose The Disappointment Artist almost made me quit writing, cause I knew I would never be that good. Incidentally, though I talk about his mysteries, (Motherless Brooklyn being the other), his post-apocalyptic tome Amnesia Moon, I’d highly recommend to anybody with a taste for that kind of thing. Think of it as a moodier, slightly less zany Go-Go Girls of the Apocalypse. And if that one is up your alley, do yourself a favor and see Neil Marshall’s Doomsday. Really. Seriously. He’s the new John Carpenter.

Speaking of genre-bending wisenheimers, check out Rod Norman’s interview with Duane Swierczynski over at Signs & Wonders. Rod’s been burning through the interviews like there’s no tomorrow. Maybe there isn’t. Think I’m watching Doomsday again tonight.

And while we’re talking interviews, Keith Rawson continues his impressive, most impressive video series over at BSC with Dennis Tafoya and there should be a Craig McDonald piece soon. Between his short story output, the resurrection of Crime Factory the BSC gig and being everywhere on the interweb at once, I don’t know how he keeps it up. He’s probably on drugs. Which I am not endorsing. At all.

And on the unflagging determination tilt, tune in tomorrow when Stephen D. Rogers guest blogs here, promoting his new collection of short stories Shot to Death. Dude has published more than 500 short stories and essays including a Chicken Soup for the Soul contribution. I don’t think that one’s in the new book.

Paul Brazill has been given some rough treatment over here. His pain is our entertainment.

I have a rash you wouldn't believe.
Posted by jedidiah ayres at 5:32 AM

Thanks for the plugs, you f-ing rat bastard.
And I've been clean for a hair shy of ten years.
Ten, slightly boring, years.
Oh, and you failed to mention that I'm a staff writer over at Spinetingler now, too.

Thanks for the plug... 'Gun With...' does sound amazingly good... when Keith and the Nerd joined Spinetingler I'm sure I heard a cry of 'There goes the neighbouthood.'