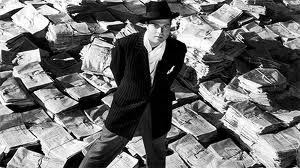 Huh? Wha? What do want from me? Details? From N@B last night? Riiiiiiight. They're... hazy. That's right, motherfucker, they're hazy. Back off. I seem to recall that Jason Makansi set the tone for the evening with, Trophy Wife, a story about calculated risk and sex, which, come to think of it, is kinda always the way it is, right? Anyhow, his descriptions of nipples and erections became something of a theme 'cause Robert Randisi followed with a couple passages from The Bottom of Every Bottle, one of which held the evening's refrain 'pink tipped perky tits' everybody say it five times fast. The fancy-pants sound system literally blew up just as Sonia Coney stepped to the mic, but I kinda thought it might and came prepared. I waved away the smoke calmly and plugged in a spare amplifier. Duct tape and snot hold this show to the road yall. Anyhow, Sonia made eeeeeverybody squirm with a chapter from her (as yet unpublished, but it's under submission, kids) novel that featured absolutely the best/worst name for a gay strip club I've ever heard. Ever. Let's just say that Sonia and Orson Wells are forever linked in my mind from here on. Benjamin Whitmer put the final fence post cross the skull of good taste with an excerpt from Satan is Real where in Charlie Louvin recounts his and Ira's childhood penchant for fucking with their overbearing father by ruining the things he valued - in this case, a prize bitch he wanted to breed. The story contained sex, maiming and slaughter and we all had a good laugh. 'Course the image of young Charlie deciding to get spendy and shoot the puppies in an expensive act of mercy rather than brain them as instructed hasn't shook. Probably won't. Remember the opening of Tom Franklin's Hell at the Breech? Even more stuck in my brain than that scene. 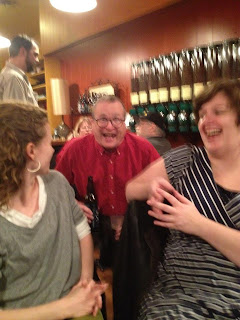 Rod Norman brought a copy of the latest issue of Crime Spree magazine with him (cover story on N@B alum Hilary Davidson yo) and pointed out that it contained that cool muthafucka Tim Hennessey's interview w/ Scott Phillips and myself. I took a gander and barely remembered any of it either. Hazy is the word of the day. But man, it were funny. 'Specially the bits where Scott's looking for an urgent care clinic and Kyle Minor steps up to answer questions for him. Yeah, gettin my own copy soon and I'll read it again.

Great time shootin shit later. I'm a broad side of the barn shit shooter, myself, but Scott and Ben got into some great banter about boom-town Denver days as they've both got late nineteenth century Colorado books brewin in their considerably sharp brainbits. I could listen to that level of back and forth a long time. Ben posted his own recap of the event right here and I'm gonna reprint this quote about Scott's The Adjustment (which he read in the airport today): "It's the funniest, darkest, most brilliant noir novel I've read since Jim Thompson." Holy crap.

So, everybody make sure to make it to N@B next Tuesday, February 28th with Mark W. Tiedemann, Kevin Lynn Helmick, Caleb J. Ross and Gordon Highland - it's gonna get weird. Kevin, Caleb, Gordon and Mark, you're up. And if you're attending AWP in Chicago next week, be sure to check out the event The Wrong Kind of Reading on Thursday night March 1st with Pinckney Benedict, David James Keaton, Kyle Minor, Anthony Neil Smith and a bunch more. Looks like I'll be emceeing that one, so I look forward to seeing you there.
Posted by jedidiah ayres at 9:46 PM

Goddamn is it good to be alive or what, Jedidiah Ayres?

I'm going to get into this Scott Phillips business very soon. The fuss is strong with this one.