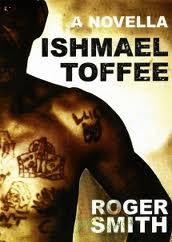 N@B Double Header retired, but once more into the breech. Gettin up in a couple hours to catch a train to Chicago, which I gotta say, I'm pretty excited about. Never traveled that way and I look forward to hours of uninterrupted reading - taking The Reconstructionist by Nick Arvin, The Bitch by Les Edgerton and a brand new novella by Roger Smith, Ishmael Toffee. Awesome. I'm headed up for The Wrong Kind of Reading, which, if you're in Chicago you really ought to get out to. Forget Margaret Atwood, come check out Nikki Dolson, Seth Harwood, David James Keaton, John Weagly and ghosts of N@B past Kyle Minor, Pinckney Benedict and Anthony Neil Smith at The Galway Arms downtown. Beware the spectators though. I expect they'll be an unruly bunch you shouldn't piss off for the very likely possibility of having your asinine ass immortalized in a nasty slice of pulp faction from the likes of Nik Korpon, Richard Thomas, Kent Gowran, Jason Stuart, Alec Cizak among others. Know what might be worse? Blurting out something regrettable and finding it's been preserved for future generations on the Booked Podcast... Yeah, Robb Olson and Livius Nedin will be around taking notes like they did last night - and I'm a bit nervous about what might make it onto a program. Y'know, once it's on the internet, it's permanent right, Greg Bardsley?

So, yeah... what might they have captured last night's N@B? Must fight my way backward through the oat soda times seven fog. Firstly, the evening's reading order was determined by our author's parents before they were even born. Alphabetical by middle initial was the way we went with our lowly lone middle-initial-unknown participant Gordon Highland who kicked off the proceedings by playing a troubling voice message he'd received from someone speaking in cagey, not terribly obscuring, masking language about some terrible things they'd just done on his behalf, before launching into a hilarious account of a sexual predator working a scam revolving around the work of Stephenie Meyer (read it for yourself). Next, Caleb J. Ross read a twisted domestic drama about a prized lip collection. It was that kind of evening. What is more disturbing than the dissolution of a marriage with revenge lip snatching? How about the delivered notes on a screenplay being along the lines of 'can it be more like Rain Man, but with a kid and a western?' Kevin Lynn Helmick read from his latest, briefly available novel Heartland Gothic (another Trestle Press casualty) and I dunno 'bout Scott Phillips, but my own testicles retreated steadily with the progression from Philistine to royal Hollywood asshat of the year in the tone and content of the (please) fictional notes. Mark W. Tiedemann read N@B's first straight up science fiction piece, a disturbing short story about a prison system in a galaxy far, not too far away. The evening had bonus feature: Nic Young had made the journey all the way from Cape Town, South Africa just to attend N@B. That's it. All. The only reason he came to our fair shores. In my typically, smug and entitled American way I demanded that he read his short (really short) story My German Daughter from the Warmed and Bound anthology. He did. I mean, how could he not? 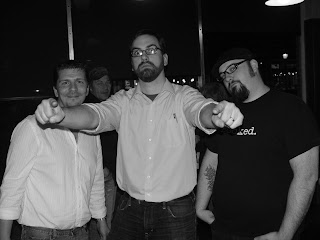 Now a quick run of fucking kick ass fucking shit, motherfuckers. Really, what the hell is in the water? These magazines look ossum! 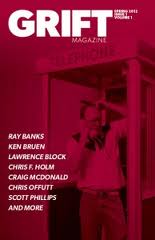 John Kenyon has a heavy duty lineup for Grift magazine's first issue. Where do you go from there? 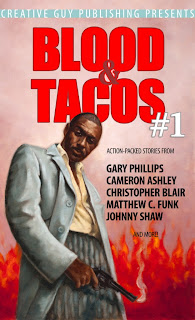 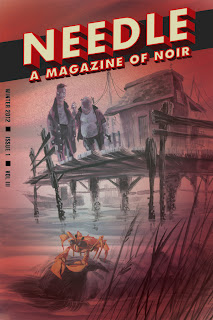 Steve Weddle, you crazy bastard, you started all this didn't you? You know who hates you? My neighbors, that's who. I had break into their house and steal the boombox outta the bathroom and hoc it for cash to pay for all these. And I think their Shotgun Messiah tape was still inside. 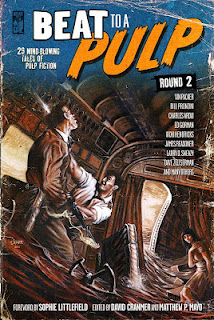 Finally, okay it's a book, not a magazine, but David Cranmer, you shame me. I really wish I had stories in every one of these publications. Beat to a Pulp: Round Two looks baaaaadaaaaaass.
At Ransom Notes, I'm digging Chris F. Holm's Dead Harvest. Gave me a big ol' Secret Dead Men boner. Didja like Stephen Blackmoore's City of the Lost? You'd dig this big time.
Posted by jedidiah ayres at 10:57 PM

Thanks for the kind mention, Jed. And man, this post was action-packed with kick-ass shit.

Enjoy the train ride--it's my favorite way to travel! And, hope you enjoy your reading material... in particular one novel...

Say hi to Neil Smith, but don't buy him any drinks... He'll insist on buying you drinks and you don't want to mess with Chicago cops...

Had a fuckin awsome time at Noir at the Bar. Thanks for the invite and the generosity. All the guys were great, glad I met em. Heartland Gothic; glad I was able send a shiver down that screenwriter spine a yers, ha! But's it's no casualty, oh no. It's alive and being reviewed by several press' as I write, and those unpublished paperbacks are available to anyone who want's while I wait. Just ask me over at facebook or google+
Trestle Press; that was the first time I'd spoke of it publicly, and this is the last time I will, but I left own my own free will. I prefer to think of it as a "clean getaway" the results of a proper criminal. No casualties here. Just got my shit back, and that's what I wanted. Have good time in Chi-town, Jed, was thinking of coming in for that, but I'll be downtown all weekend, and I'm fucking beat, so I'm staying home and reading this Noir at the Bar thing I brought home.
Till next time.