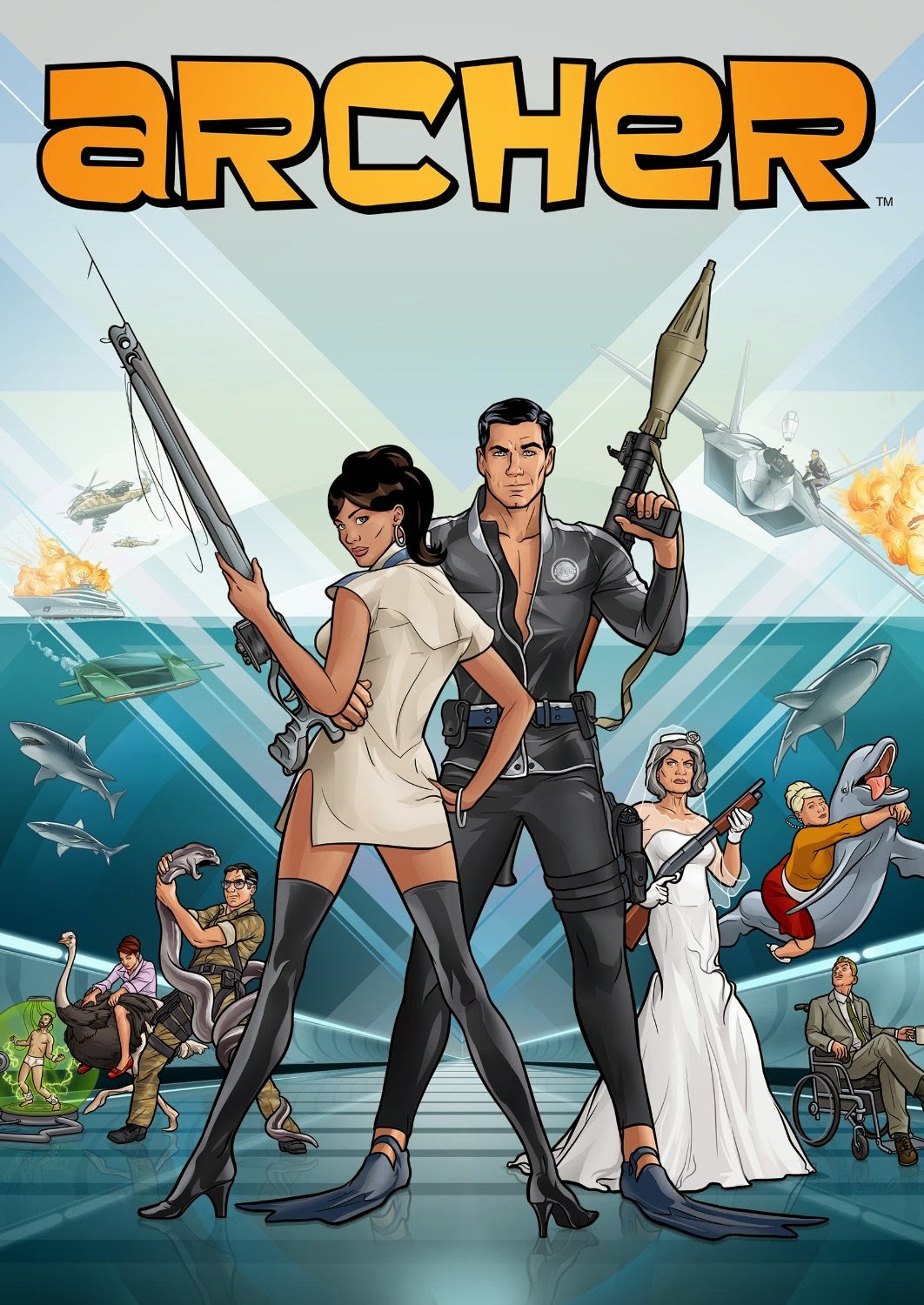 Archer Season 4 - Adam Reed - Between the Bob's Burgers/A History of Violence mashup season premiere, the Anthony Bourdain Bastard Chef episode, Krieger building Ray cyborg legs and Timothy Olyphant putting the moves on H. Jon Benjamin, it is just absolutely the best. Only drawback to this season- no more Burt Reynolds... Wow, that sounded weird.. Best moment: episodes 1-13. No seriously. Something something danger zone. Oh, shit, somebody make me an A History of Violence t-shirt featuring a still from episode 1 - preferably one with Archer smashing the guy's face with the coffee pot or stabbing the other one with the spatula, stat! 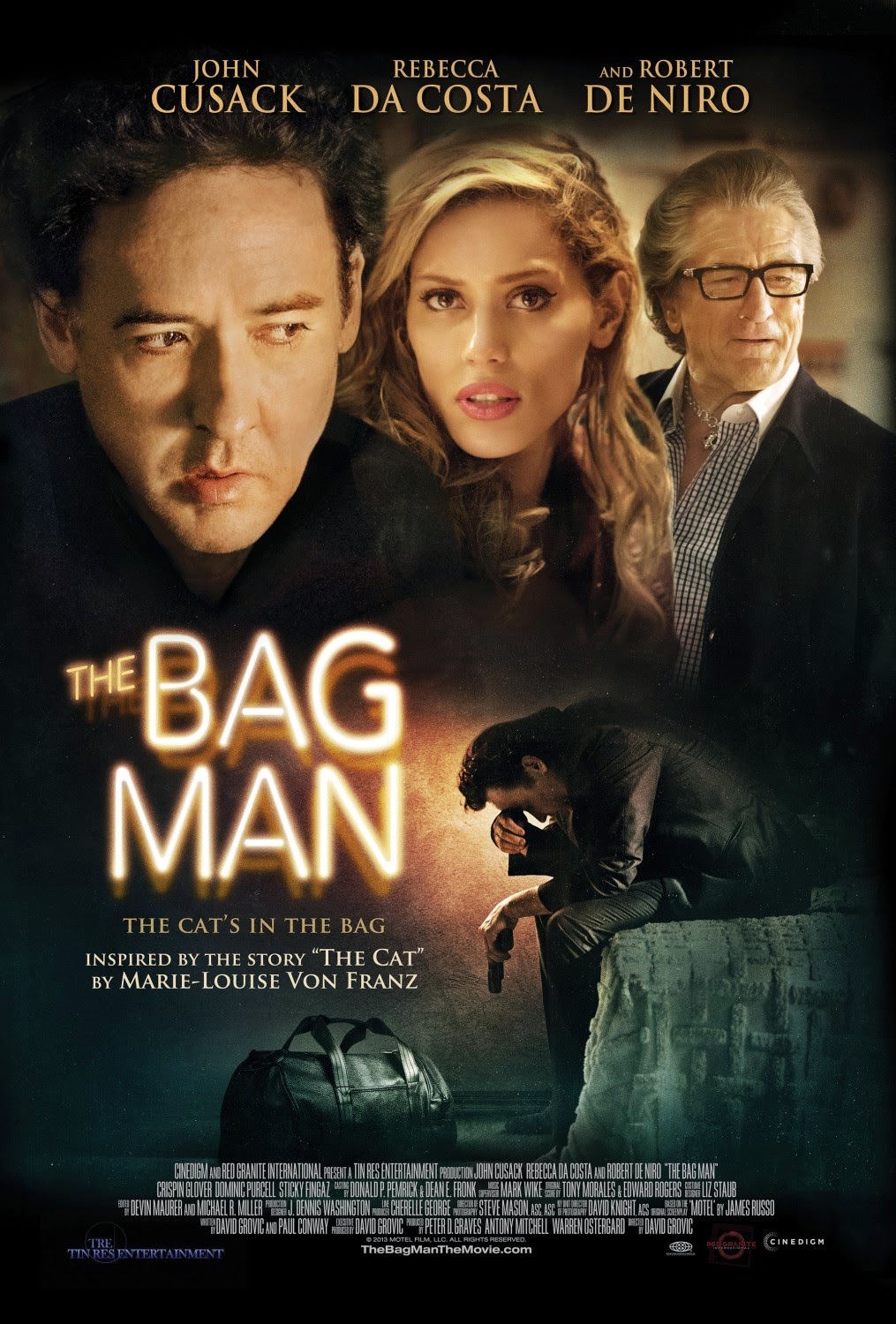 Bag Man - David Grovic - "John Cusack plays a bag man hired to deliver a, um, bag - whose contents he knows not - to a dirty ol' backroad, bumfuck motel for Robert De Niro wearing a weird hairdo and being all cryptic. The creepy location is populated by strange fucking people, ooh, like maybe Crispin Glover in a wheelchair (he's actually pretty good) and a sexed-up, very anglo-looking ethnic-type girl getting all bothered and clingy. What the hell is in the bag?" That's actually my pitch for Angel Heart the TV show, if anybody's interested. I wouldn't really call it an exercise in style, as that, to me, implies a little more effort, but it has style, just not much idea of what to do with it. A handful of nice moments and a plot that ticks along pretty good for a bout 25 minutes, but ultimately... It's based on a stage play by James Russo - didn't know he wrote - maybe it works better live? In all fairness, I'd probably have really enjoyed it 20 years ago and some young ones might stumble onto it now and get turned on to some better flicks through it... I approve of stepping stones, I just don't have time for them any more. Best moment: Martin Klebba being effectively intimidating. 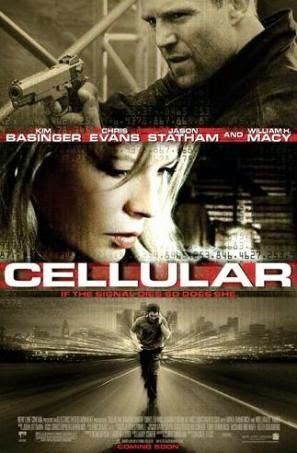 Cellular - David R. Ellis - Trapped in a strange location, an abducted woman rigs a broken telephone to dial numbers at random and snags the ear of a stranger on a cellphone and convinces him to help her. The gimmick? He can't lose the connection or all is lost. I'm not down on gimmick movies. I rather like them when they're done well. Unfortunately, this one is a bad mix of awkward humor and poorly sustained suspense, that would've been served much better by a full commitment in either direction (I had the thought that the script actually had been written as a comedy and was produced by folks who didn't get it... which might warrant a second viewing sometime to be seen through that lens). Best moment: subway chase sequence - it's kinda nice to see Jason Statham as the heavy. 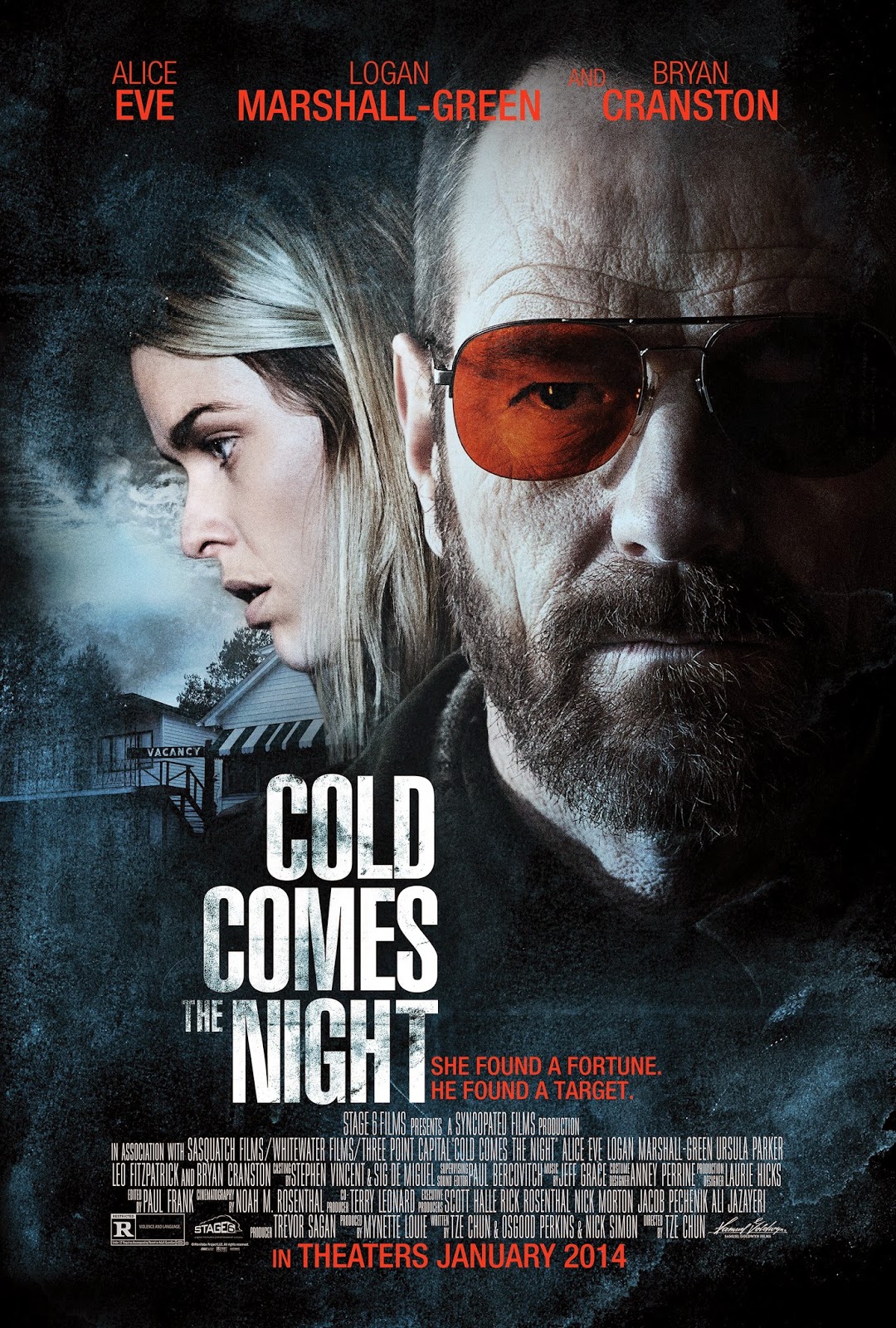 Cold Comes the Night - Tze Chun - The woman who runs a dive-motel has a big money problems and a fast-approaching deadline, so when there's a murder in one of her rooms and some very dirty money belonging to some very dangerous people from the crime scene ends up in police custody, she goes along with a plan hatched by the murdered dude's partner to retrieve the goods so's she can take a cut. Solid little crime picture featuring a half-dozen characters with (okay, maybe not entirely) plausible (but it's a movie fur-fucks-ache - go with it) and conflicting interests and motivations brought together without too much fuss and jerry-rigging. Bryan Cranston's accent is a little odd, but consistent and the danger he brings to every scene is welcome. I made a crappy-motel movie double feature outta this one and The Bag Man - guess which one I liked more. Best moment: oooooh shit, I can't believe she just got shot. 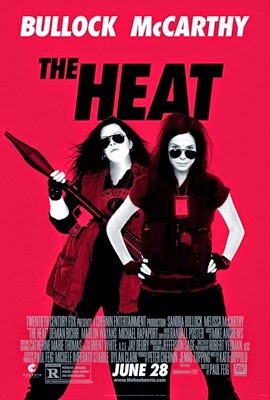 The Heat -  Paul Feig - Sandra Bullock and Melissa McCarthy are the mismatched pair forced to work together in this buddy-cop comedy that juuuuust misses the broad side of the barn. Did I laugh? Yeah, I did, a few times. My biggest problem? It wasn't usually at anything the stars were doing. When your comedy leads are consistently shown up by the (admittedly strong) supporting cast (including Jane Curtain, Tony Hale, Kaitlin Olson, Bill Burr, Demian Bichir and one of the New Kids on the Block) you have got a problem. I will say it was damn nice to see Michael McDonald just killing it in a sympathetic role. His hang-dog defeated police captain was the most consistently good thing in the picture. Best moment: Stopping by McCarthy's apartment. Yeah, she lives here. 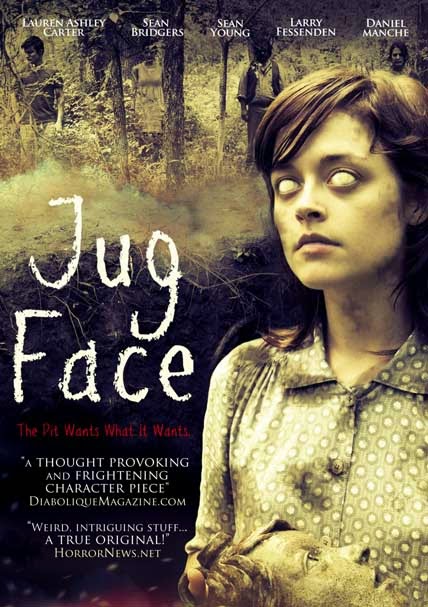 Jug Face - Chad Crawford Crinkle - Deep in the wooded mountains of America - where we've been conditioned to equate natural beauty with hardship of life and fucking twisted barbaric shit - a not entirely benevolent deity dwells in a pit and watches over a small community of hill people. The deity provides for them, protects them and heals them and every once in a while demands a sacrifice. Jug Face is the story of Ada (Lauren Ashley Carter) who knows she is next in line to be sacrificed and the means she employs to avoid it. Hey, Jed, I thought this was a crime blog, why're you talking about a supernatural horror movie? I'm glad you asked. Because at its core, Jug Face is dealing with the same elements of my favorite crime fictions - doom, guilt, cowardice, transgression of the social contract, notions of duty and familial love - and dealing with them from some really fascinating angles. How so? The first important subversion going on here is the difference between this film and cult pictures (like say Martha, Marcy, May, Marlene) where there's a group of average folk who've subjugated their will and identities to the bizarre claims of a charismatic personality in turn for a place in the world and a home among other like-minded folks. This is no crazy cult - these people live in community around and in service to a (strange to us, but) demonstrably real deity. You serve it, it helps you, you cross it, it kills you. These folks aren't crazy, they're acting sanely in an insane situation. Second, our anti-heroine is not the plucky, empowered dystopian rebel of The Hunger Games, rising out of an unjust system and taking it the fuck down, in her own mind and heart she's a traitor to her people, trying to remain in and part of a community that she is actively destroying. Not once does the notion that 'maybe we all should leave this mountain and try our luck elsewhere' come up (and conspicuously so - point taken), but the true concern of the character (and the film) is how she attempts to live in the contradiction of saving her own ass and living with loved ones when her own ass is the only thing that can save her loved ones. The other great touch of this picture is allowing the warmth and attractiveness of the other people in the community to come front and center and give us a glimpse of exactly why she'd want to remain a part and emphasize the tragedy of her (and their collective) choices. One minute they might be slicing your throat open (gently), but the next they're rolling in the yard playing with their children whom they clearly love. So much more effective than populating the place with a bunch of ignorant, ugly, bloodthirsty backwood hillbillies. Deception, betrayal, sacrifice and bloody consequence - this is a terrific crime story. Best moment: the wrong sacrifice. 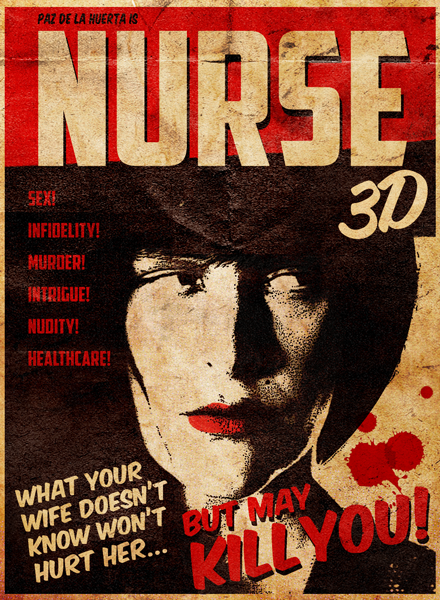 Nurse - Douglas Aarniokoski - A serial killer uses her skills and position as a nurse to aid in her true vocation in this silly, sleazy, amazingly psychologically inconsistent, exploitation flick. Paz de la Huerta throws herself into the role of Abby with abandon and enthusiasm that almost makes it all work. She's let down by a confusion of the script (or is the script supposed to be mirroring Abby's inner faulty logic?) and an inability of some of the cast to loose themselves as thoroughly as she does in the grindhouse spirit of it all (every time Katrina Bowden takes a shower - in her underwear... twice! - I was pulled out of the experience). It's probably best just to cut the half-assed stuff out of the final product when so much of the picture and its stars will go all the way. Best moment: the whole batshit hospital sequence at the end is fun and stupid and over the top - the way these things are at their best. 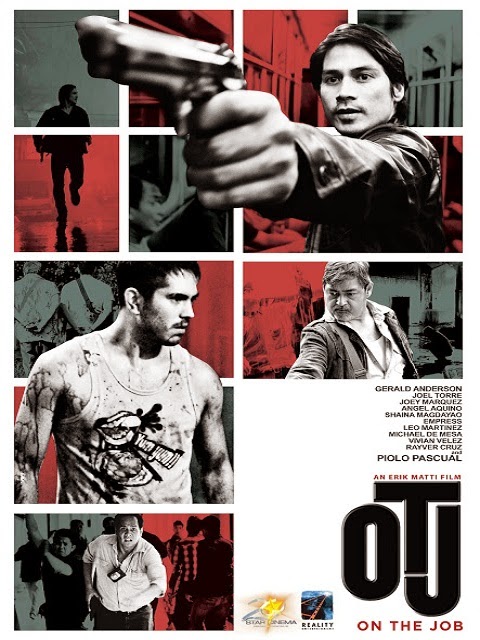 On the Job - Erik Matti - A Filipino crime flick about inmates clandestinely released onto the streets to carry out assassinations and then smuggled back into prison with iron-clad alibis, On the Job is the first film of the year that I can't imagine not being one of the year's very best when it's all said and done. Holy shit, this was fantastic. It's simple and brilliant, and brutal and complex, and human and tragic, and thrilling and haunting. I think that covers it. Tackled from multiple angles - from the inmate/assassins, the cops, the politicians who are usually involved on the hiring or the killing end of these operations - it's a multi-faceted portrait of modern corruption in the clothes of an action thriller and satisfies on many different levels. Just go watch this shit. Now. Best moment: the betrayal/assassination - manhunt - finishing the job sequence in the middle of the picture is masterful action and suspense film making, as well as a feat of screenwriting and editing. Holy crap. 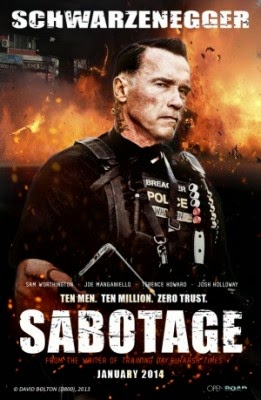 Sabotage - David Ayer - The film opens with a DEA team raiding the mansion/compound of a drug cartel on US soil, killing a lot of people and blowing up tons of shit. What becomes apparent soon is that this is not an officially sanctioned action, or part of an investigation - it's straight up armed robbery. The team abscond with $10 million in cash and blow everything else up to cover up the crime, only when they go to retrieve their loot, they find that they've been ripped off. By whom? One of their own? A boogie man higher up in the government? The cartel they targeted? A rival organization? This is easily the darkest character Arnold Schwarzenegger has portrayed and it's interesting territory for an icon of action righteousness to be exploring even if it is a bit late in the game (I'll say this for the film - they use Arnold's age and time-fucked features to good effect). Also, Ayer makes so many small and crucial decisions well - the look of characters, locales, and shots - but Sabotage is a frustrating experience because for all the elements it's got the goods on, it pisses away so much potential on bad over-macho acting (I get it, that's part of what's being explored here - this hyper-masculine subculture - but I cringed just like I did at it in The Hurt Locker - it's hard to do well) and just awful lines these poor guys (and gals - you've never seen Olivia Williams like this, I guarantee) are given to say... shudder. Still, I believe Sabotage will surprise you, if you stick with it. The final scene especially is a haunting coda to the film that could have been and will probably demand a re-examination of the film you just sat through. I will definitely be re-watching this one. Curious whether I'll be doubly frustrated or like it more the second time. Or both. Best moment: the end invoking thoughts of Sam Peckinpah and Rolling Thunder.
Posted by jedidiah ayres at 4:39 PM