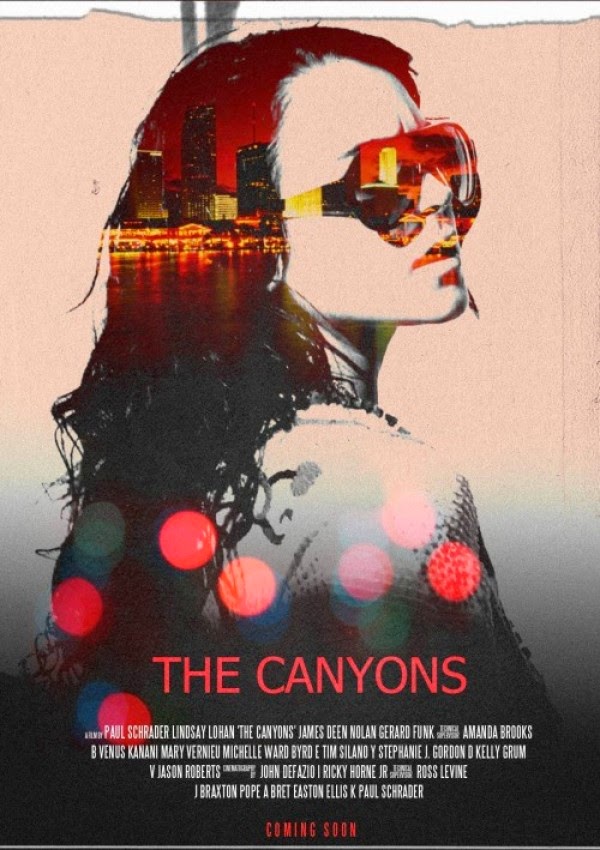 In today's installment of  Picture Books, Bryce Allen takes a look at film translations of the work of Bret Easton Ellis - not a name that gets tossed around much in crime circles (though, transgression and assholism - two of my favorite corners to cover - are kinda his thing, yeah?), but I think is a terrific choice for this series about the quality of the voice of a writer coming through the lenses and throats of a host of collaborators. Ellis's name is one that instantly divides every room it's uttered in and film adaptations divide fans and foes alike.

Hell, even after the critical crap-mat The Canyons became (directed by Paul Schrader from an original script by Ellis) I'm interested in it. And geez, I don't know what the state of the Ellis-produced television adaptation of Jason Starr's The Follower is, (been a while since I heard anything, so it may not be happening), but yeah, his name raises an extra eyebrow on a property I'd already be tuned in to.

Ellis - love him, loathe him (and either for the wrong reasons) he's a compelling choice for Picture Books... Bryce, the mic is yours. 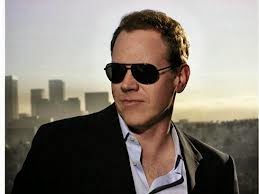 One of the most controversial and divisive writers of his generation, transgressive novelist Bret Easton Ellis also forged one of the most unique careers in recent literary history.

Seemingly lauded and derided in equal portions, Ellis’ prowess as an author is definitely a point of contention among fans, mainstream critics and esoteric scholars alike. While his artistic legacy remains up for debate, his status as an indelible part of Pop Culture Canon has been firmly established, with the film adaptions of his various works having played a major role in the dissemination of his creative/intellectual brand.

Wielding a style self-described as ‘affectless extremism’, Ellis’ work consistently deals with the concept of postmodern terror, blending morbid satire and hyperrealist sensibilities with quintessentially-American topics/settings to create works that are both captivating and disconcerting. The film versions of his novels have managed to maintain this basic framework, albeit with varying degrees of success and exactness. 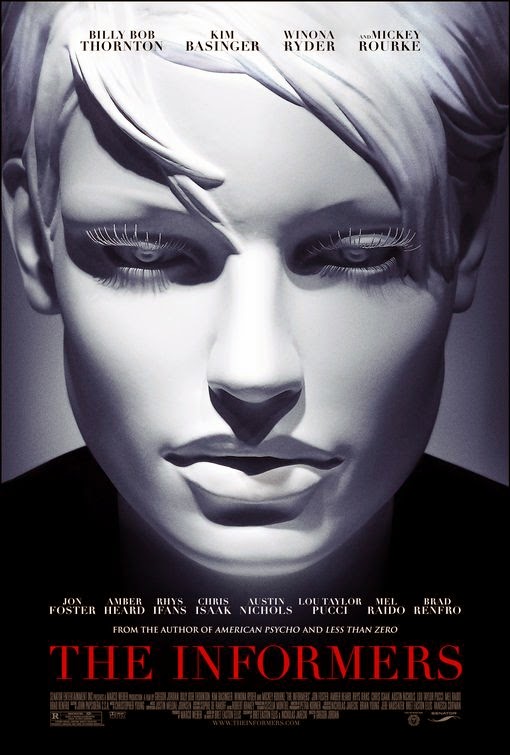 While Ellis’ best/most ambitious novel (Glamorama) currently resides in the ninth ring of Development Hell and his entertainingly-haphazard short story collection The Informers was (justifiably) relegated to a limited theatrical run status a few years back, three of his major works have thus far made the proper transition to the silver screen. All three films – Less Than Zero, American Psycho and Rules of Attraction – are drastically different in terms of aesthetic, but the underlying tone of each is rife with the distinct voice of their source material’s architect, - by design, accident or otherwise. 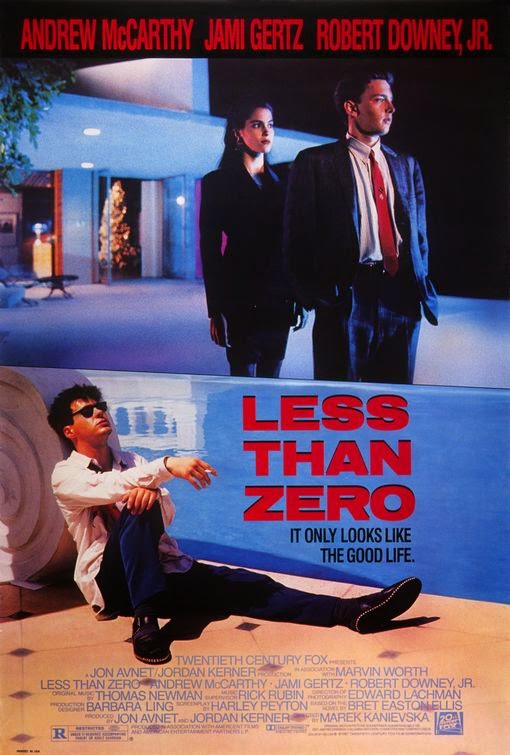 Released only two years after Ellis’ famous/infamous debut, the film version of Less Than Zero suffers largely for being a byproduct of its era. With ‘teen flicks’ such as The Breakfast Club and Pretty in Pink enjoying success at the box office at the time, this dark, nihilistic take on American teenagedom in the mid/late-1980s is ultimately watered down in its transition to celluloid by poor casting (Andrew McCarthy, Jami Gertz) and unsubtle Hollywoodification of the plot/tone.

Despite the efforts of Robert Downey, Jr. as ill-fated party boy Julian and James Spader as the cruelly-engaging drug dealer Rip, Less Than Zero is simply unable to faithfully convey the noxious ambivalence of the novel. In addition to the book’s most notorious/shocking scenes being outright removed, various aspects of the characters/story are altered in a manner that dilutes the tale’s potency, a plastic veneer of morality being haphazardly applied to the malignant sentimentality conveyed in the book.

Ellis’ original vision does manage to permeate through the film’s flaws however. Cinematographer Edward Lachman is able to effectively give the setting (affluent L.A.) a noirish ambiance that belies the glossification of the teleplay while the vacant cynicism, grotesque selfishness and ethical ambiguity of the group of ostensible ‘friends’ presented in the book remains evident in small doses throughout.

Moreover, the film’s most glaring weaknesses actually serve to, unintentionally, echo the novel’s central theme (or lack thereof). The movie looks good and has a high budget but it’s ultimately an empty shell of itself, with darkly atmospheric undertones persistently imbuing a sense of foreboding dread in the viewer.

In the abstract, the wooden/vacant performances turned in by Less Than Zero’s lead actors in conjunction with the overall awkwardness propagated by the interference of the middle-aged film executives working on a multimillion dollar project makes the film almost a perfect conduit for the abject decadence Ellis’ prose evinces. So while the film fails as an adaptation, it somewhat succeeds in acting as a vehicle for the young author’s message of appearances and reality being horrifyingly interchangeable, thereby negating the value of both.

As such, the film version of Less Than Zero flourishes in a perverse realm beyond itself – a piece of art AS a piece of art, a distorted/demented recreation that both betrays and augments its origins. 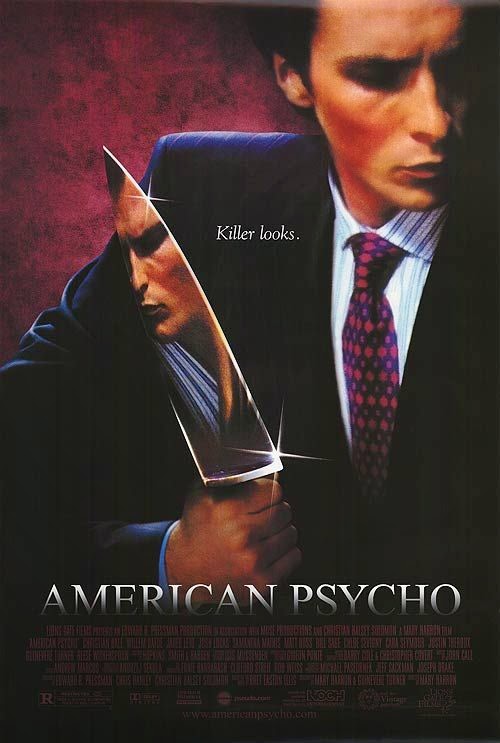 Erroneously marketed as a horror movie and the predecessor to quite possibly the most illogical, misguided attempt at a franchise/sequel in cinematic history (AP2: All-American Girl… seriously, it exists), director Mary Harron’s version of American Psycho is nonetheless one of the best film adaptations ever made, period.

Deftly and economically taking the very best scenes from Ellis’ novel and placing them in a perfectly-sequenced manner that nails the outlandish machismo and sadistic Epicureanism of maybe-serial killer Patrick Bateman’s world, Harron creates a slick, sardonic feature that perfectly encapsulates the black humor and bombastic irony of the book. While (necessarily) excluding the book’s most graphic sections, she brilliantly navigates (instead of circumventing) the shock-factor elements of the text, ironing out a wrinkly masterpiece and making the nefarious story at once more profound and accessible. Just as the live versions of ‘I Want You To Want Me’, ‘Rock And Roll All Nite’ and… well, all of Frampton Comes Alive are more successful than their studio versions, so too is Mary Harron’s American Psycho an improvement upon Ellis’ novel, a point of contention among BEE purists but indisputable IMO. 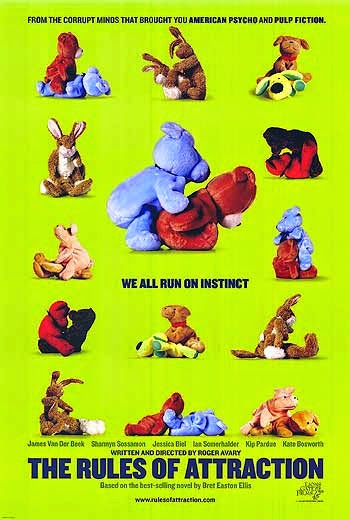 Much like Less Than Zero, Roger Avary’s adaptation of Ellis’ second novel The Rules of Attraction falls victim to the timing of its release. Made in the early-naughts, shortly after the likes of Freddy Prinze, Jr. and Sarah Michelle Gellar had brought about a second ‘golden age’ of teeny bopper films, TROA was largely marketed as a party-at-college movie with a sexy young cast - anchored by a pair of prime time soap stars in James Van Der Beek (see: Andrew McCarthy/ miscasting) and Jessica Biel, who only actually appeared in a handful of scenes purely as eye candy.

Unlike previous efforts to adapt Ellis’ work for the big screen, Avary’s film embraces the unrepentant depravity of his characters and remains utterly faithful to the novel.  The frantic ennui of the multiple nontagonists are showcased in glorious fashion, with the jarringly uneven makeup of the narrative also adhered to, almost to a fault. The satirical elements are so subtle that they almost go unnoticed however, particularly for viewers not familiar with the source material.

Certain aspects of TROA didn’t particular transfer well from the 1980s novel to the early-21st century film either (a line of dialog pertaining to the writing of a letter is particularly glaring anachronism, forced into the screenplay most likely because it really is a great line)… Nonetheless, The Rules of Attraction remains the most faithful adaptation of a BEE novel and the one with which he has stated is his favorite.

Bret Easton Ellis’ three theatrically-released film adaptations are at seemingly odds with each other, their producers/marketers, and, to an extent, themselves. They each present a unique interpretation of their source material and their lack of collective cohesion and combative nature with one another as entities is, in a way, a microcosm of what Ellis’ schizophrenic marque has become – by design, accident or otherwise… Much like this rambling, overwritten/semi-coherent essay, Ellis’ pseudo-trilogy is essentially an elegant collection of tales brimming with sound and fury - signifying nothing. 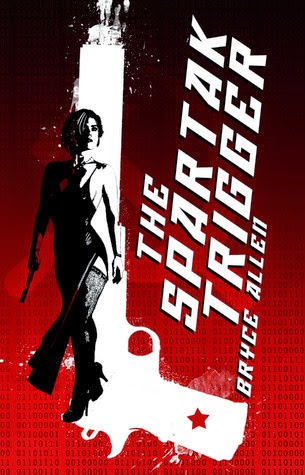 Bryce Allen is a Canadian writer currently living in the United States. His debut novel The Spartak Trigger is presently available from Bedlam Press.
Posted by jedidiah ayres at 6:26 AM

Hey, neither rambling nor overwritten. Excellent piece. An insightful look at the adaptations. Totally agree about AMERICAN PSYCHO. An improvement on the book.

THE INFORMERS was not a direct-to-video release. It had a limited theatrical run. I would know because I saw it in the theater myself.

Very nice piece, man. For the record, I loved RULES OF ATTRACTION and watch it anytime it's on.

Steven - how'd you feel about The Informers?