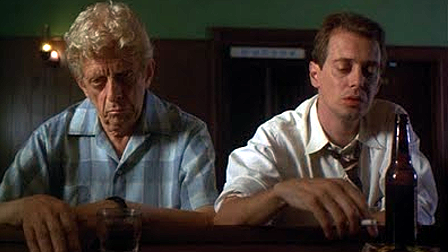 This week, we've got a helluva lineup for N@B with Jason Stuart, Jack Ryan, Scott Phillips, Matthew McBride, Clayton Lindemuth, Pinckney Benedict and Laura Benedict and shit, y'know that's a lot of talent in one place (not to mention possible sightings of Josh Woods, Jason Makansi and Tawny Leech), but damn, it's only about a third of what's happening with N@B stuffs this week. 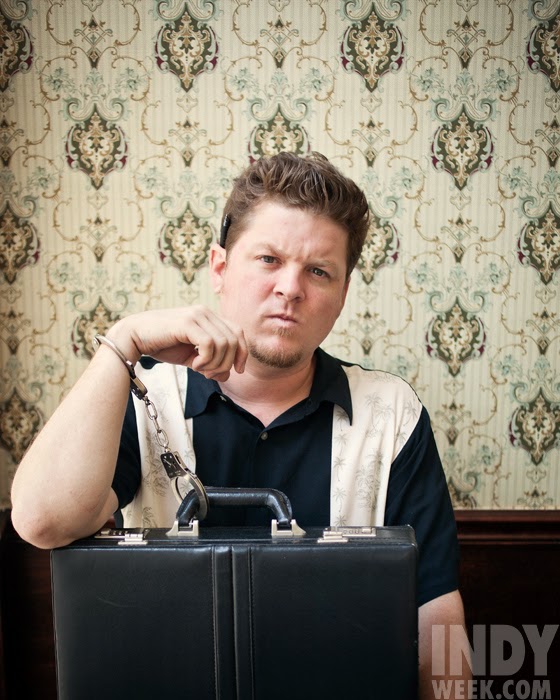 In case you haven't checked out his novel Dirtbags or read his stories online, I asked Eryk to introduce himself to the other kids with an incriminating story... Or rather, I asked him for a CriMemoir piece and he chose to incriminate himself. Thanks, Eryk, we all appreciate it.

A CriMemoir by Eryk Pruitt

I'd never heard such bullshit before. I mean, part of the reason I came up glamorizing the junkie and the drunk and the derelict was because there was no honor anywhere else. I busted my hump day in and day out in the restaurant business, but there were fewer places you needed to watch your back more. And that, a so-called HONEST job. From the Mexicans cooking the food, to the shady waiters bringing it, to the dodgy guy running the place, all the way up to the shiftiest of them all: the owner.... No, after not too long, I sought out honor anywhere I could find it.

But you won't find it among thieves, no sir. That much was a lie.

Not that I was any better. Don't let me suggest otherwise and get away with it. No, my number one sin was frugality. A sensibility that I thought others around me lacked and lacked hard. I grew up on stories like the one with the ant and the grasshopper and how the grasshopper acted like a dick but come winter, there he was, banging on the ant's door, begging for food. I didn't want any such comeuppance, never had never will. So I would save. Squirrel away. Stash.

Or, as others would call it: Holding Out.

And like those fables I grew up with, this one has a moral. Life wouldn't be life without a lesson or two and I've always reckoned if you come out with the same amount of holes you went in with, then maybe you learned them all right. Maybe, maybe not. 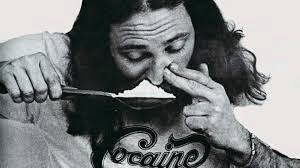 So like the ant, I hate to be without. How often has four in the morning come along and you and that girl start to twitch and the others are heading home and she's like "maybe I should too" but what you and her and everybody else from here to the moon are thinking is OH GOD, IF WE ONLY HAD ONE MORE LINE. Or better yet, some really heavy stuff is happening and you're eating seeds and stems because there ain't no more pot and licking the pages of High Times on the off-chance, just the fucking OFF-CHANCE...

So, no. I never wanted it to be like that. Like I said: I'm frugal. I'm in it for the long con. I'm always looking over to the next horizon. 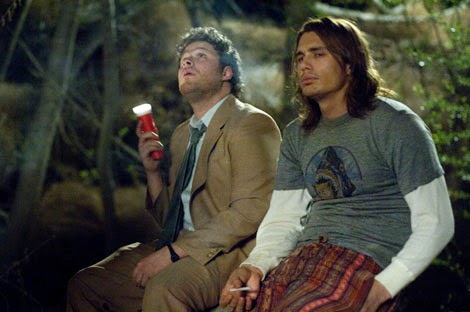 That one night in '93, still a kid. Me and a handful of guys are sitting around on our skateboards and it's dry, man. Really dry. Some friend of ours who knew more guys than we did said cops busted a vanload of stuff out on 67 near Cleburne, so nobody had any weed. In the days before we could get into bars or successfully work a bra strap, spending a Saturday night without weed was dangerous and before long we were looking for somebody to fight. But we get the great idea to drive three hours down to Waco to watch the dust-up that's been all over the news. Some shit with the ATF and religious fanatics.

Problem is, the Feds don't like kids watching them work. And little did we know, this was a night somebody tried to sneak into the compound and join their religious brethren. So understandably the guys at the roadblocks were on high alert and when a car full of kids roll up to take a look-see, we get machine guns put in our faces. Picture us, all of eighteen years old and spread eagle in the dirt while the ATF rifles through their shit. Oh... and I'm holding out. That's right. The Federal Bureau of Alcohol, Tobacco, and Firearms have us by the nutsacks and I'm apeshit because there's a quarter-sack of kind in the breast pocket of my Harley jacket. You know the kind with like twenty pockets and zippers and metal on leather. Every suburban kid with a socially acceptable teenage rebellion was wearing one in those days and at that moment, federal agents were searching every inch of it.

Every inch except that one, single pocket. The one with the shit in it.

When we drove away that night – dicks still intact – I showed it to the boys and while we took the edge off all the way back to Dallas, I got an earful about holding out.

But did I learn? No sir. A few years later, I'd turned my shit to eleven. There I am inside my shady neighbor's apartment, chatting up his girlfriend, when there comes a knock on the front door. Those apartments laid out so that visitors and folks who lived there came to the back door. The front doors faced the woods, so only cops and pizza delivery drivers knocked on the front.

And we didn't order a pizza.

Call it the drugs. Say we're stupid. Name it what you want, but for some reason the chattering bastard who opened the door never stopped to think about who may be on the other side of it or maybe we should go about cleaning up the cloudy, streaky mirrors and rolled-up dollar bills and half-cut restaurant straws or maybe even that pipe over yonder... no, he just opened the door and told the folks on the other side to come on in, have a seat. 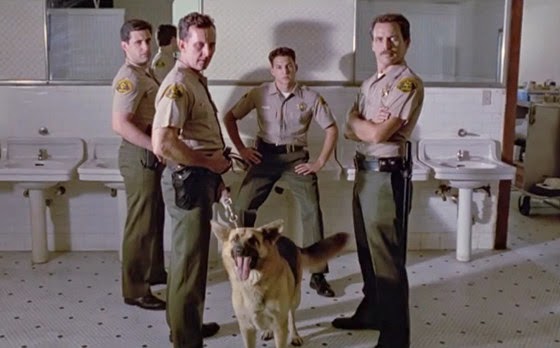 Folks on the other side were seven members of the East Texas Task Force and a German shepherd. Yep. They put this unit together specifically to battle the scourge of the region, which thankfully we had already shoved up our noses. They searched us, searched the place, then told each and every one of us they would be taking us back to our own apartments to search our homes, would that be a problem?

Would that be a problem?

Well, as I've already discussed in the previous 1000 words, I got me a little compulsion. Yes, we were waiting for more shit to be delivered. Yes, we were all up in arms about how long it was taking and where is that guy and why ain't he here yet and all that, but guess what: if you came over my house, I had four skinny lines all chopped up on my medicine cabinet mirror, waiting for that shady bastard's girlfriend to come over so we can make a night of it. A few Valium by the nightstand so we could take the edge off. A little something to smoke and hell, my birthday was right around the corner, so who all knew what else I had squirreled away.

Yep, I was Holding Out. 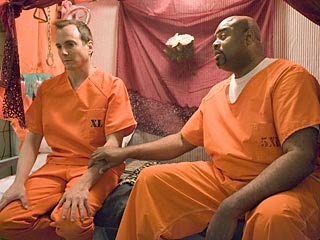 So I spent that night with them cops going in and out of every room in my apartment, playing that Good Cop/Bad Cop game where one puts all the shit he finds in a big, giant plastic Baggie and the other tells me how it's going to be. I'm going into a cell with Big Black Bubba. You know what Big Black Bubba will do to a good-looking white boy like me? Do I want to be boyfriends with Big Black Bubba? Then the other comes along and says they ain't looking for me, why don't I just tell them a few names? Why don't I just make a few introductions? Why don't I just make it easy on myself? All the while, they keep walking around the house and filling up that giant plastic Baggie where they'd written my name and information across the front with a big-ass Sharpie.

And then, like an angel from heaven, they get the call on their radios that the guy who we'd been waiting on had shown up to the apartment. Oh no, he made them! He's running! They need backup! The two agents exchanged glances and dropped everything, then ran out of the apartment. Leaving me alone. Alone with that plastic Baggie. 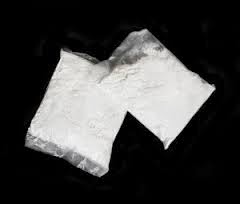 I considered keeping it. Hiding it. Holding Out again. I mean, Lord knows I'd need it later, after the night I had.

But fuck that. Man, I jumped on that shit like a skunk on a june bug and, before you know it, dumped the whole of the contents into the toilet and flushed. I didn't so much as lick the Baggie before I'd gotten rid of all of it.

Twice man, Holding Out nearly got me. That dirtbag maneuver never did nobody no favors. Honor among thieves... Yeah, right.

No, from here on out I will lay it all out on the table for one long, sustained and glorious party, destined to fuck us all to kingdom come and happily ever after. 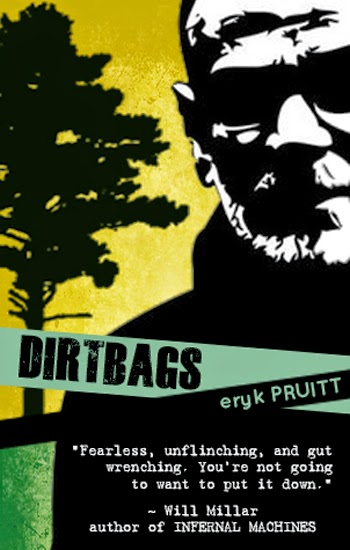 Eryk Pruitt is a screenwriter, author, and filmmaker living in Durham, NC with his wife Lana and his cat Busey. His film Foodie has won top awards at eight film festivals across the United States. His short fiction appears in Pulp Modern, Thuglit, Swill Magazine and Zymbol, among others.  His novel Dirtbags is available now. A full list of his credits can be found at erykpruitt.com
Posted by jedidiah ayres at 10:13 PM