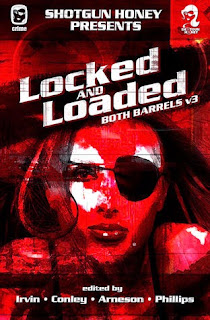 Last couple weeks have been a fun chance to debut some new material. First up, Shotgun Honey Presents: Locked & Loaded: Volume 3 was published by One Eye Press and edited by Ron Earl Phillips, Erik Arneson, Jen Conley & Christopher Irvin and features my short story The Plot, but don't let that stop you from picking it up. Another twenty-four contributions from the likes of Kent Gowran, Keith Rawson, Owen Laukkanen, Patricia Abbott, Chris Rhatigan, Nigel Bird, Angel Luis Colon plus Bracken MacLeod and Michael Bracken (considering making Bracken my legal middle name) and several others ought to more than make up for my puddle on the carpet. 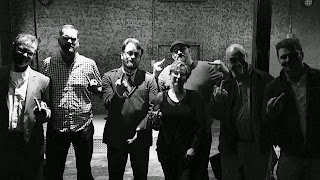 Next, I was in Chicago for N@B a couple weeks ago. Stayed with Jake & Heather and entered into conversations on topics like Jello Biafra's bluegrass faze, promoting books in France, the melancholy of porno conventions, all the latest in current events, all the oldest in personal histories, fascinations with L. Ron Hubbard, the Church of Scientology's own pulp master/P.T. Barnum/Bernie Madoff and the pleasures of breakfast at midnight. The event was attended by favorite folks like the Gowrans, the Hennessys, Kevin Lynn Helmick and John Weagley, hosted by Jake Hinkson and emceed by Livius Nedin & Robb Olson who recorded the whole damn thing and released said audio as two episodes of their famed Booked Podcast. 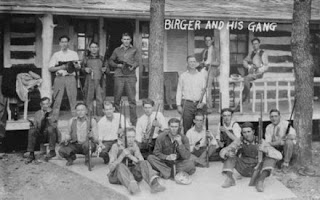 So click here for episode one in which Robb tries to bequeath me my first nickname since grade school: The Stepfather of Noir, which, granted, is more flattering than Jedidiarrhea, but I have a feeling will not stick like the the explosive defecation moniker I've had the last thirty years. Also in that episode I read a story called Twisted Shikse which will published in the upcoming anthology Jewish Noir from PM Press and edited by Kenneth Wishnia. It's a mish-mash of Old Testament stories and recent happenings in Ferguson as well shitkicker tunes, Charlie Birger and the KKK... I'm sure it's exactly what you'd think of with the prompt - Jewish noir. Bet your sweet tuchas it's a thing. 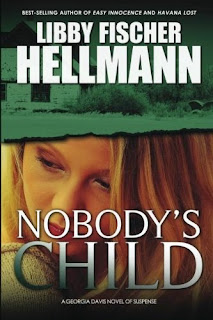 After I stunk up the joint Libby Fischer Hellmann read a heart-warming prison story about how well things go between the races behind bars. After the event I picked up a copy of Libby's novel Nobody's Child and if it's as feel-good as her short story you'd best hide the sharp objects before endeavoring to finish. 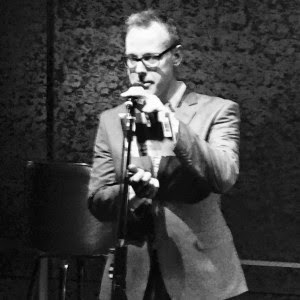 Booked's second episode (which you can hear right here) kicks off with the one 'n only Heath Lowrance reading his short story Five Bucks Buys Some Goddamn Vodka from Needle Magazine's Spring 2014 issue. Was a huge pleasure to finally meet Heath face to face. I've been enjoying his stuff since The Bastard Hand and it turns out he's a handsome bastard... and not nearly as gaping an asshole as you might expect... I was surprised. Dan O'Shea finished the evening with his sick little story of tweakers knocking over a Girl Scout cookie sales champ, Thin Mints. 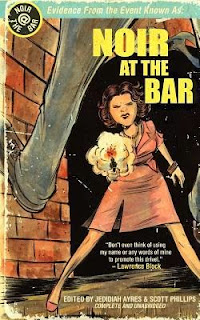 Hey, Jed, I've heard of O'Shea before and that story sounds wicked cool. I hate the sound of Dan's Kathleen Turner on two packs-a-day voice and don't want to listen to those smug douchebags at Booked, any suggestions on another way I can read  Thin Mints? Glad you asked. Dan's been part of the N@B community for many years and you can read Thin Mints in the very first Noir at the Bar anthology of fiction available exclusively at Subterranean Books in St. Louis. Have I ever mentioned that book before? Got excellent content from Cameron Ashley, Pinckney Benedict, Frank Bill, Sean Doolittle, Kyle Minor and Derek Nikitas among others. Get yours before they're all gone. 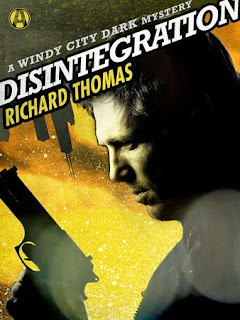 BTW - you know who else is in that first N@B antho? Chicago-native and non-N@B attendee because he had a fancy pants speaking engagement in Oklahoma, Richard Thomas. Richard's latest book Disintegration is not an entry in the 33 1/3 series about The Cure, but a noir-boiled crime mind fuck the Booked boys also spoke on. Go, read. Listen. Hope to cross paths again, soon, Richard. Damn handsome man on the cover of that there book, too. 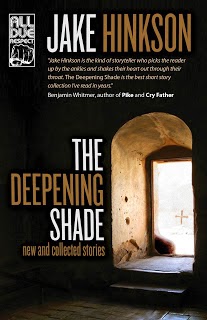 And while we're talking damned handsome books - nothing so pretty (though some more good shit, no doubt) as the physical copy of Jake Hinkson's short story collection The Deepening Shade from All Due Respect Books. Seriously, this is a super classy paperback, that's almost as deep a pleasure to hold as it is to read. Good job, Chris Rhatigan, Mike Monson, JT Lindroos and everybody at ADR. 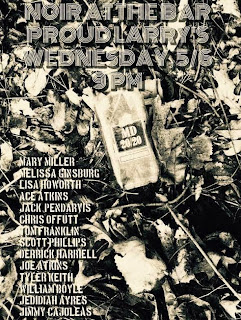 Last week I was in Mississippi for N@B-Oxford hosted by bearded ball-shiner and N@B-alum, William Boyle. Bill put together a ridiculously heavy-hitting lineup who deserve more attention than I can give them, but... a couple of highlights: Jack Pendarvis reading a short piece titled Joan Crawford: A Hot Looking Woman, Ace Atkins reading the monkey-killing passage from Larry Brown's Fathers & Sons, Derrick Harriell hanging some noirboiled poems out to dry and the outlaw narrative musical stylings of Tyler Keith, but my personal favorite moment was Melissa Ginsburg giving us a cut passage from her long-anticipated debut novel Sunset City (seriously, I've been excited for this one for years... like five). Anyhow, when that beast comes out next year from Ecco, you can betcher sweet bippy I'll be rapping to the beat. 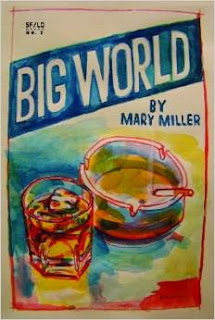 Another highlight - the preview of Mary Miller's Mississippi Noir contribution... and coincidence? I gave a taste of my story Have You Seen Me? from the upcoming St. Louis Noir. Shit, I'm looking forward to those two Akashic city noir installments edited by Tom Franklin and Scott Phillips respectively. Get here soon, please. Meantime I'll have to catch up with Miller's novel Big World... I hear things. Big things. 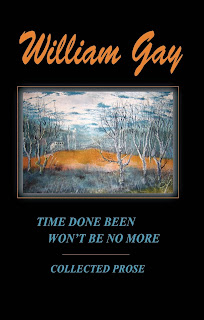 Had the pleasure of staying with Tom Franklin and Beth Ann Fennelly and dig through their comic book collection as well as put my smudge marks all over the William Gay novel Little Sister Death coming soon from Dzanc (who will also be publishing The Final Country and have already put out there an e-book collection of stories and essays Time Done Been Won't Be No More - Guy Intoci and company are doing bang-up work). 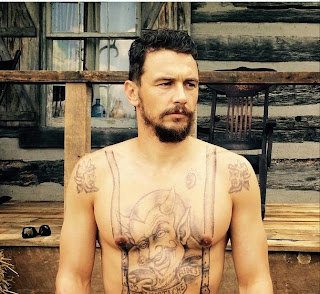 Also in big Gay news... it appears my dreams of a big screen adaptation of Gay's novel The Long Home are coming true only... not as I had hoped. James Franco is producing, directing and starring as Dallas Hardin in a new film based on Gay's debut novel. Franco has a taste for southern gothic as demonstrated in his previous directorial efforts based on classic books: As I Lay Dying and The Sound and the Fury from William Faulkner's famously unfilmable books and Child of God from Cormac McCarthy's creepiest cranial crannies. The Long Home has a cast of names recognizable and double-take inducing (Courtney Love? Ashton Kutcher?), but does not have a script written by me. 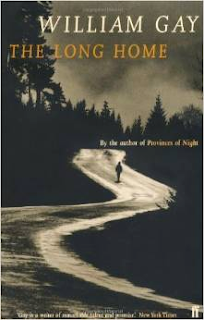 One of my favorite never to be realized film projects of the past few years is an adaptation of The Long Home Scott Phillips and I collaborated on. Good experience. But damn... thought that one might actually happen. End of the day - even if the movie sucks (it might - it might not. I mean one of the hacks they did get to write it wrote Spring Breakers) it should introduce a few more folk to the books of William Gay and that would be a good thing.

So there you go - three new stories. For me, that's huge output. Maybe I'm on a roll. Not sure what I'm going to read at N@B-Indianapolis on June 20 alongside Hinkson, O'Shea, CJ Edwards and Alec Cizak. Show up and find out.
Posted by jedidiah ayres at 6:40 PM

Wait, you mean that wasn't you?