Something Along the Lines of the Fourth Movement of Beethoven's Ninth With a Crushing Body Count: The Kieran Shea Interview 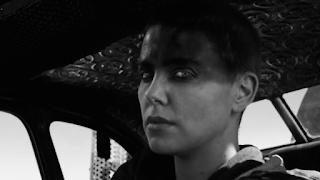 A few months back when George Miller's post-apocalyptic man-without-a-name-except-that-he's-got-a-name franchise made a stunning return to mainstream consciousness, Mad Max: Fury Road ruffled a few sensitive masculine feathers by having the ovaries to place a lady front and center in the action. The collective "Dey takin our jerbs!" from fragile-minded masculinity that rang through the web was a hoot, and then it wasn't. It went from amusing to embarrassing to a little alarming when it wouldn't stop. 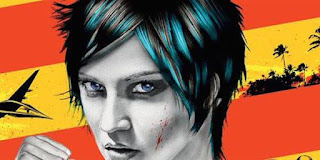 If it served any positive purpose it made your purchase of Kieran Shea's Koko novels (Koko Takes a Holiday and the just released Koko the Mighty) a progressive political act. In fact reading and enjoying the hell out of these books may be your duty. Does Shea have an opinion on that?

People of all stripes take issue with just about everything these days. A crisis of identity? Whatever, man... take a number. Women, men... for me what's important for entertaining fiction is to have characters who take action. Period.

Well the Koko books have got the entertaining bit down for sure. They're bloody, profane, irreverent pieces of futuristic pulp that turn their own pages and tickle your frontal lobe with speculative wit.  (You want a few more suggestions for kick-ass lady-led sci-fi books? Check out this piece by Joel Cunningham) 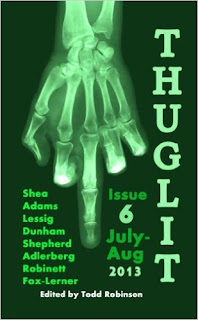 I've known Shea's work for a while now. His crime fiction appeared in terrific venues for years (Crime Factory, Thuglit, Beat to a Pulp, Needle, Ellery Queen and many more) and his voice was one of my favorites, but nothing he'd previously produced quite prepared me for the propulsive stylistic kick in the nuts of Koko's world. So I asked him...

What accounts for the change of gears?

I was provoked. Right around the time Koko made her first appearance in Plots With Guns, several writing friends told me that my sallies into detective fiction (while amusing) seemed to lack the spark of my darker, down-the-rabbit-hole crime stories. Since some of these lackluster detective stories came with an actual paycheck, I think I fell briefly into a habit of playing it safe--treading water in the duck pond, so to speak. Treading water in the duck pond is fine, but even the best of swimmers will drown sooner or later. It was time to release the alligators and scare myself. 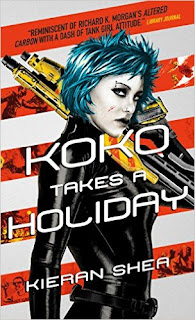 How soon was there thought of making Koko a series character?

To be honest, it wasn't my intention of doing a series at all. It's weird, but you write these things never knowing if your work will ever see the light of day. It's best to keep your expectations low. That's probably the scariest thing about writing, that nine times out of ten all your effort will be in vain. When Titan initially requested a double-shot, I was floored. Of course, Koko the Mighty has a squeaker ending so I'm angling for a third installment. In this age of binge media intake, you want to stay fresh. As for the larger narrative...I'd like to see a final triumph for Koko for all she's been through. Something mentally along the lines of the fourth movement of Beethoven's Ninth Symphony with a crushing body count.

Drugs play a major role in both books - will they be a series-long theme?

Can't say. Psychoactive substances and euphoriants have been around since our species got a good look at reality, didn't like what it saw, and decided to ingest the best tonics available. And medicines designed to make the intolerant tolerable? Are we really talking science fiction or are we talking about the local liquor store, house of worship, smart phone app, fad, or prescription? Maybe it's excessive, but honestly I don't think so. In the same vein, I've had readers ask me about the violence, like, isn't it all a bit much? People don't read a lot of history.

About the violence - I would like more, please - I'm assuming that you get those notes too (I really would like more violence - don't hold back, now). Has interacting with new readers shaped your vision for Koko and her world any? 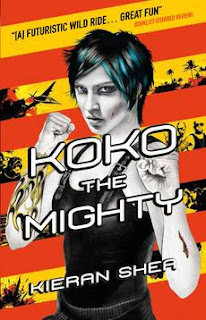 More? Well, sure, if that's what you want. After Koko the Mighty, I think my plan is to go bigger, more unhinged, and bloodier. A sanguinary trip through a burning funhouse. Not to get all cheeky, but only Koko shapes Koko's world. Readers have championed her innate dynamism, so that keeps me on track.

Koko may shape the world, but she's got a good foil in Flynn and dark mirror in Wire that help shape and define her - what does the supporting cast bring to the table and do they ever threaten to take over?

There were moments when drafting Koko the Mighty that I needed to step back because I was having so much fun with Wire. And Flynn, he's become Koko's conscience in many ways. Supporting cast and foils should broaden, buttress, and stretch the central protagonist if possible. It's a tricky balance. But now I think Koko getting called out and tested will electrify her even more. Lone chargers who never stumble or lose or doubt themselves bore me. The other day I was re-watching The Shootist with John Wayne, you know? What made that movie and Wayne's aging gunfighter so compelling was that he had regrets and flaws. He was dying and, in truth, Wayne was dying. I just like to let Koko loose and see what happens when things in her world don't go as planned.

Wire was a lot of fun to read in Koko the Mighty. The more punishment she goes through the harder it is to hate her. Is that intentional?

Hate to love, love to hate. If anything, she's amoral, skilled, and relentless. Let's not forget, originally Wire is of the same background as Koko, and her commitment to following through no matter what gets thrown her way is a much a part of her code as it is Koko's. Ruthlessness, however, is what Wire dines out on. It’s her greatest asset. That same ruthlessness is something I think Koko has tried to put aside, but it's becoming clearer in order to persevere Koko can't deny that part of herself. I will say this though--it was a fun handing Wire an epic raft of shitstorms, because I love vicious, black comedy. 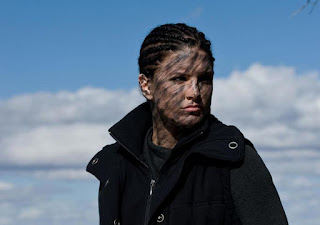 Right here is where Hardboiled Wonderland make its pitch to Hollywood - Gina Carano as Koko and Ronda Rousey as Wire in a balls-out day-glo gore-gasmic metric-fuck-ton of cinematic TNT. Get back to me soon! 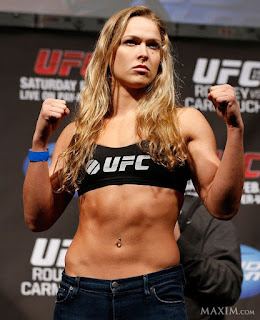 Have you got any non-Koko projects you'd like to take on soon? Comics? Crime? Cookbooks?

I'm working on a standalone crime novel that might be three quarters in bag, so there's that. I don't know. I may just either work on my devil traps or my tennis backhand. Hey, Jed, what time do you have?

Did you just slap me? 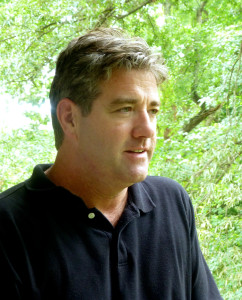 Turns out he's got a shiny new Koko short story called The Meat Clock at i09. Go get some and keep up with Kieran on Twitter @BlackIrishBlarn.
Posted by jedidiah ayres at 6:36 PM