This Gun For Hire: Phillip Noyce

Today at Ransom Notes, I'm spotlighting Roger Smith and his two breathtaking Cape Town novels Mixed Blood and Wake Up Dead. On Roger's website, I came across this promotional pic of Samuel L. Jackson as the character Disaster Zondi from the developing film based on Mixed Blood. Attached to direct - Aussie Phillip Noyce, another talented film maker with a very uneven track record that I thought I could give a top 5 retrospective to. As many groans as you may emit, looking over his body of work, (The Saint, anyone?) there are some gems too. It's been a long time since the James Foley piece, maybe I'll make this a series, though. Certainly up for suggestions. 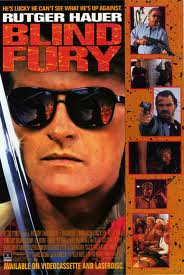 Blind Fury because who's not up for another take on Zatoichi the blind samurai? Rutger Hauer starred in more half crappy movies in the eighties and nineties than just about anyone. Half crappy, but nearly all hold some small pleasure for me upon recollection - Wanted: Dead or Alive, The Osterman Weekend, Ladyhawke, The Hitcher, Flesh+Blood, The Blood of Heroes, Buffy the Vampire Slayer, Surviving the Game, Split Second - okay full on crap in some instances, but such is the good will garnered by some actors, (Dennis Hopper, Gene Hackman), that no matter what level of dumbassedness the movie sinks to, they are a redemptive spot. Such was the case with Fury. Not a good movie, but not altogether unwatchable, thanks to the ridiculous premise and the charisma of Hauer. 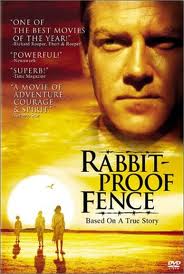 Rabbit-Proof Fence makes the list simply because of it's curve-ball nature. Noyce was coming off a string of lack-luster, big-budget Hollywood thrillers and did a complete 180 throwing in this quiet, personal film about three young aboriginal sisters (and a cousin) who escape from government custody and journey through the outback to find their mother from whom they were separated. It's a small film about a dark chapter in Australia's history.

Salt makes the list because I haven't seen it yet. I may never see it, but I've seen the trailer and it looks like the kind of dumb fun I can go for sometimes. Angelina Jolie, (who also starred in Noyce's The Bone Collector from Jeffery Deaver's book) doesn't do much for me, but Chiwetel Ejiofor does, (though I'm a bit concerned about him becoming the new Tommy Lee Jones of the nineties and early 00's - the noble antagonist pursuing the inevitably innocent protagonist), and the action looks like it might hold up even if it's hung on a plot only done well once that I know of, (No Way Out directed by Roger Donaldson - another candidate for this series). 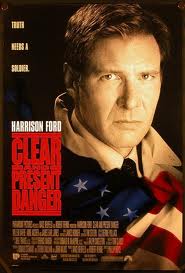 4) Clear & Present Danger - No matter the mess American foreign policy has made of the world, and no matter the fairly lack-luster feel to the whole thing, (none of the actors seem to want to be making this movie) or the sprawling, anti-climatic structure, (maybe it worked better in Tom Clancy's novel), there is one show-stopping sequence buried in the middle of this long ass messy sequel to Patriot Games. I'll boil it down to this - SUV massacre. I worked in a movie theater when this one came out and I timed my inspections to coincide with this scene twice a day. Means I've seen it, uh... scores of times, I suppose, but I'm up for another go. Quality action film making stuck in a dull movie. 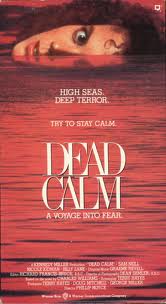 3) Dead Calm - Noyce came to international attention with this (relatively) low-budget thriller that utilized it's assets to the max and turned it's budgetary limitations into virtues, (Roman Polanski's Knife in the Water comes to mind, though it was based on a novel by Charles Williams who also wrote Hell Hath No Fury the basis for the terrific noir The Hot Spot directed by Dennis Hopper). The cast is tiny - Sam Neil and Nicole Kidman as a couple sailing the Pacific on their yacht who come across the lone survivor of another ship, Billy Zane. What follows, is a clausterphobic picture, shot against the endless oceanic horizon, of sexual tension and psychological discomfort. Made before any of the actors were big stars, it works on the level of a small film. If it were made today it would be overshadowed and smothered by the weight of it's exposure. 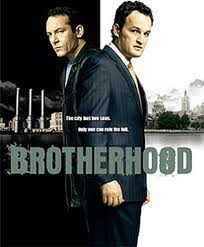 2) Brotherhood - This calculated attempt by Showtime to fill the void The Sopranos was leaving, about an Irish-American family in Providence Rhode Island was far better than it was ever given the chance to be. It's reason for being, (replace the Sops as the go-to gangster drama on premium cable) was also it's worst enemy. The comparisons were invited and poisonous at the same time. It was never a knock-off, but rather a solid crime-political-family drama. Noyce was not a creator, but as the helmer of the pilot, (and other episodes), he had a strong influence on the tone, look and casting of the show. Two brothers, one a politician and one a gangster, (The Brother's Bulger perhaps?), fight to co-exsist and remain independent of each other, but find, (of course), that they are in fact very similar and need the other to survive their respective careers. I'm grateful to Showtime for not canceling it after the second season and giving us a short run third season to wrap it up, 'cause it was worth it. Take note, HBO, I'm still waiting for the Carnivale and Deadwood movies, dammit.

1) The Quiet American - Having made two of the biggest successful PR films for American foreign policy, (the afore-mentioned Patriot Games and Clear & Present Danger) and then the Aussie-Cock-Up Rabbit-Proof Fence, The Quiet American based on the great novel by Graham Greene visited the roots of the debacle our nation's relationship with the world had become. Saigon 1952 is the setting for a love triangle between an older, world-weary British reporter, (read - old-world colonial superpower), a beautiful young Vietnamese dance hall girl, (read - attractive potential colony up for grabs), and the energetic, idealistic young American aid worker who just might work for the CIA, (read - yeah, you get it). The story's conclusion is as heartbreaking as it is inevitable and, in the long run, futile. Michael Caine is aces as Thomas Fowler and not even Brendan Fraser as the sinisterly earnest and innocent Alden Pyle doesn't get in the way of what I choose to view as Noyce's personal comment on his legacy. Apology accepted.
Posted by jedidiah ayres at 8:07 AM

I agree with you about Dead Calm. As tight a film as you can get.

Frankly, Paul, I'm surprised it doesn't get more notice from up and coming directors siting it as an influence or personal eureka moment. Maybe I'll watch it again tonight