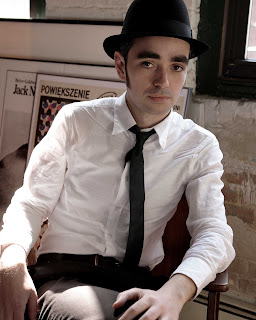 There's this terrific little insight in Tony O'Neill's Black Neon where a character is trying to eke out a living by stealing books and selling them to a second hand shop. The idea is so... I dunno, romantic? Antiquated? Misguided? Doomed? He's a junkie and living mostly off the money that his trans-hooker paramour makes, but he's trying to y'know contribute. Anyhow, the bit I dug here is the advice the second hand book seller gives him when he shows up with a bunch of current best sellers and Oprah recommendations - something along the lines of 'Oh, man, don't bring me this shit, nobody buys it. Bring me the alky and junkie literature - that's what people who fucking read read.' A crude summary of a more poetically expressed sentiment, but there it is. 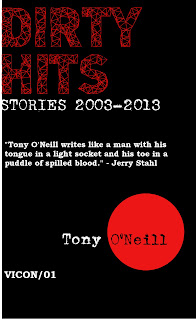 And reading O'Neill specifically, I'm inclined to agree. I take pure pleasure and genuine spiritual benefit from his stories that look miserable and squalid on the outside, but ultimately are about the pursuit, however mostly grossly misguided it may be, of pleasure, of connection, of transcendence. And every time I finish one of his stories I think - shit, why isn't everything like this? Had to order Black Neon from UK and I just picked up his collection of short stories, Dirty Hits, for my kindle - 'cause that's how they're available, but they're worth it, kids. Take a tip from a junkie - score this primo shit.

A few years ago I wrote a review of Sick City on another website - I'm republishing it here... 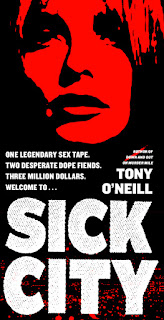 When I needed it most, Tony O’Neill’s Sick City was the right book at the right time to shake me out of my doldrums. Every page pricked and stung and teased out the next gasp, gag and guffah with a seemingly effortless prose style that turned those barbed-wire pages all by itself. It follows the criss-crossing paths of a host of scammers looking for the perfect hustle to feed their addictions be they sex, drugs or fame. Some, like Dr. Mike, seem to already have found theirs. He’s a gifted sincerity conjurer, ironically helping other addicts “recover” with his treatment center, books and television program that showcases his work with celebrity addicts. His clean-cut and healthy-living image cover something darker, surprise surprise.

Others, like Jeffery wear their addictions on their sleeves (or under them) until the bottom drops out of his prime gig when his lover and sugar-daddy Bill, a retired and wealthy ex-LAPD officer dies in his sleep. Knowing his place as a certain if secret pariah to Bill’s family, Jeffery discreetly cleans out the various drug and cash stashes around the house as well as other illicit goods and slips away without anyone knowing he ever existed. One item especially occupies his rapidly deteriorating mind – a film that Bill, in his LAPD days, discovered as a first responder to a particularly gruesome and legendary Hollywood crime. He checks into Dr. Mike’s rehab center to lay low and attempt to come up with a plan to sell the priceless piece of celluloid.

Inside the rehab center, Jeffery meets Randal a Hollywood cautionary tale. The son of a powerful and influential producer and brother to another, Randal grew up sharing family meal times with De Niros and Nicholsons. Having had a good, long look at the man behind the curtain, Randal is immune to the contact-high from celebrity that so many others he sees everyday seem to live for. His drug of choice is meth.

A circumstantial friendship begins to form between Jeffery and Randal (two junkies not in the least interested in reforming) until one day Jeffery decides to tell Randal about the film he wants to sell – an intimate film – a sex picture shot at a wild party featuring Steve McQueen, Yul Brenner, Mama Cass and in her final performance, mere weeks before her murder by Charles Manson’s wacked-out family, Sharon Tate. With Randal’s show-biz connections surely they could find the right buyer, someone obscenely wealthy, a collector of celebrity and history to place alongside the gold plated toilet seat that Elvis Presley died upon or the mummified member of Napoleon Bonaparte. This is the pot of gold at the end of the decidedly dingy and tainted rainbow they’ve both been chasing.

What could go wrong?

Well, a fair amount, it turns out. Re-submerged in the flow of human detritus on the streets our favorite junkies are up against a host of possibilities for a quicker, nastier death than the ones promised by smack and speed, but they soldier on in outrageous fashion, at turns comically-inept as well as truly heroic, with only each other and their absolutely corrupted senses to rely on.

Sick City is a crime story of minor proportions, putting a human face to the eleven o'clock news flash about nameless victims of shootings in fast-food parking lots and the never recovered missing neighbors whose pathetic heap of belongings end up scavenged on the sidewalk when they're evicted in absentia. This one, friends, does not find a far-reaching conspiracy that leads to multi-national corporate corruption and government collusion. It's not a redemption story either. But it is absolutely as epic as the players involved are going to be capable of pulling off.

It's also neither a tragedy nor a scathing satire. Jeffrey and Randal, (as well as Pat, Trina, Spider and the whole fantastic cast) are so vibrantly invested in their lot, that they're almost enviable. It's the straight characters who're bored and depressed and fooling themselves. And what might look like an attack on celebrity-obsessed culture rolls about in the juicy muck of it as much as the actual characters and TV shows it's mirroring.

What it is is equal parts harrowing and hilarious and without a dishonest instinct to lead you astray. Those seeming non sequiturs where conversation cuts off plot beats are every bit as important to the book as the ultimate fate of the story's perfect maguffin - the celebrity sex film.

The quotes before the opening chapter sum it up perfectly. From Winston Churchill - Success is stumbling from failure to failure without losing your enthusiasm. And Christopher Reeve - Once you choose hope, anything's possible.

Reading Black Neon now, one of those "as slow as I can, to keep it alive"-reads... Gonna order all his orderably paperbooks, for sure, and read the others in digital. Keep on keepin on, you are our beacon of taste! Thanks! ( and goddamit, write a new book again, been a while )