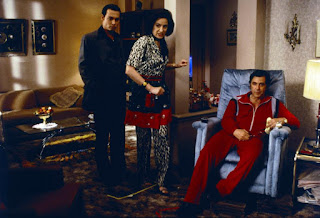 Something about the end of the year holidays always puts me in the mood for austere formalism and opulent design. There's something about the deep darkness outside and the stillness of trying to stay warm fireside, under blankets or with the aid of family members or household pets that enhances my concentration on and capacity to appreciate those onscreen efforts. This is when I want epics, gothics and surrealist visions. I'm here for Stanley Kubrick, David Lynch and Nicolas Winding Refn. 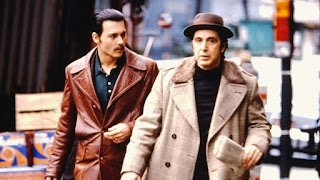 The other thing I want is gangster films. And... they don't have to be grand either. Between Halloween and New Year's Day I'm most likely to watch organized crime pictures and yes there are some that scratch both itches; The Godfather, Casino, L.A. Confidential... man, I just watched The Irishman and I bet it becomes a go-to holiday viewer too, but I'm also down for knockaround guys in track suits and bad jewelry.

Mike Newell's Donnie Brasco has become a holiday favorite for me because of its wonderful and wonderfully pathetic Christmas scene. 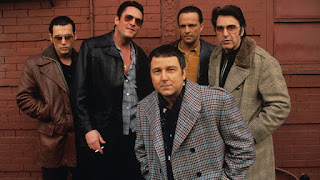 Donnie Brasco is the fugazi identity of undercover feeb Joseph D. Pistone (Johnny Depp) who's working his way into the Bonnano crime family in the 1970s. He's found a low-level sponsor in Al Pacino's Lefty, whom he will ingratiate himself to and manipulate until he entirely compromised, used up and ready to be cast aside. 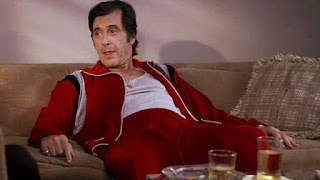 Anyway, what doing the job means for Pistone is not being with his real family on Christmas. December 25 finds him visiting Lefty's shitty apartment where his wife and adult son pass the yuletide lying to each other about drug use, parental disappointment and the quality of the cooking draped in leisure wear in front of a tiny TV.

And it's here in this sad-carpeted, smoke-stained wallpapered dump that the ghost of Christmas-mustachiod briefly appears into Lefty's household... and Joe likes this guy, don't forget. He feels sorry for Lefty's troubled, dope-addicted son (what would you do if your father was a mean street criminal?) and Lefty's shabby domicile. He feels sorry for Lefty, his friend, who has thrown in his life's work to a criminal family for whom he runs scams, burgles, murders and disposes of corpses for. It's depressing as shit.

But Joe's own homelife isn't much better. He hardly sees his wife (Anne Heche) and kids. He misses his daughter's first communion because he's off doing actual crime under the cover of lawful infiltration to nail his best friend's boss. So... he's finding some cultural/quasi-religious comfort in the sad exchange of gifts with his closest friend (whom he will betray).

Donnie and Lefty exchange wads of cash for Christmas gifts and at the end of the scene Lefty borrows his gift back from Donnie because funds are low and fuck if that don't land hard. It's a laugh, a cry and a fucking deeper sob to see Pacino (fucking Michael Corleone) in this reduced state and Depp, devoid of make-up, but mask firmly in place as real life Pistone/Brasco sharing this empty, farce of a cultural observance/religious pantomime in the hallway outside the apartment away from seeing eyes.

Merry fucking Christmas. Fuggedabowdid.
Posted by jedidiah ayres at 9:44 AM