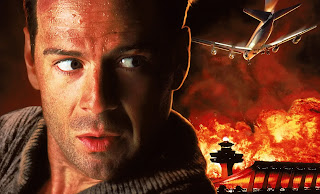 It bums me out that we've gone in a few short years from a society and subculture who can cheer on the spirit of anybody watching Die Hard as a CrimesMas family favorite to rolling our eyes and tweeting OMG if I have to hear one more dudebro declare that Die Hard is his favorite Christmas movie I'll lose it.

I fully support your embracing the CrimesMas spirit via Die Hard. It's wonderful and I hope that during this wrap-up to an especially shitty year you (and I) can enjoy watching holiday favorites with loved ones (in person or across the twittersphere) without feeling self-conscious about the basicness of our enthusiasms.

But maybe this is a good time to switch things up slightly and remember that Die Hard 2 is also a CrimesMas movie. Maybe even more so than Die Hard. After all it's set in a snow storm on Christmas eve whilst waiting for air delivery of a very special package. And while the villains maybe aren't as singularly charismatic this time around, the supporting cast is to die (hard) for. Willis, Bedelia, William Atherton and Reginald VelJohnson reprise their roles and are joined this time around by William Sadler, John Amos, Dennis Franz, Art Evans, Fred Dalton Thompson, Robert Patrick, Vondie Curtis-Hall and fucking-no-shit Franco Nero (plus look for early quick appearances from John Leguizamo and Mark Boone Junior). Nobody's volunteered to take on Die Hard or Die Hard 2 for the CrimesMas series, but over at his blog The Night Editor, Jake Hinkson wrote about it a couple years back and I asked his permission to re-post that piece below. If you don't know Jake as the reigning king of Arkansas Baptist Noir, (most recently Dry County - fucking rips, man) maybe you know his name from his writing about classic film, film noir and crime fiction in places like The Criminal Element, Los Angeles Review of Books, Mystery Scene (or collected in The Blind Alley - get on that).

Keep up with all things Hinkson related at his website. 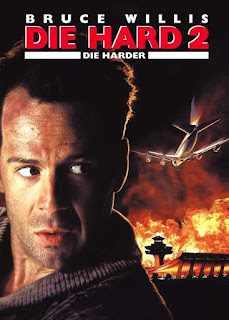 When it was released in 1990, Die Hard 2: Die Harder was greeted as a rehash of the original 1988 film. Fair enough. The story finds John McClane (Bruce Willis) stuck at Dulles International Airport at Christmas, once again bringing in the Yuletide by saving his wife Holly (Bonnie Bedelia) from terrorists. In retrospect, though, Die Hard 2 is clearly the best of the Die Hard sequels, the only film in the series to really extend the charm and excitement of the first film.

Before I explain what makes it the only worthy successor to the original, I suppose we should dispense with the rest of the sequels: 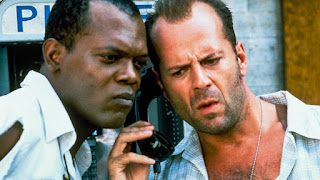 Die Hard With a Vengeance (1995) was seen by many as a return to form for the series, with Die Hard's director John McTiernan taking back the helm from Die Hard 2's Renny Harlin. But seen today, Vengeance is more dated, a relic of the 90s. It has a gimmicky plot (McClane and a post-Pulp Fiction Samuel L. Jackson are forced to solve puzzles by a criminal mastermind like they're facing off against the Riddler), a dull villain (making Jeremy Irons the brother of Alan Rickman's Hans Gruber just draws attention to how much better Rickman was in the first film), some clumsy racial politics (McClane, a NYC cop, teaches Jackson, a middle-aged black man, how not to be such a racist), and a sloppy third act (re-shot almost entirely, it feels rushed and lifeless at the same time). There are some good scenes here and there (the shoot out in the elevator, chief among them), but the film is overlong, tired, and talky. Worse still, it marks the turning point in the series when McClane goes from being a likable everyman to being a grumpy lunkhead. 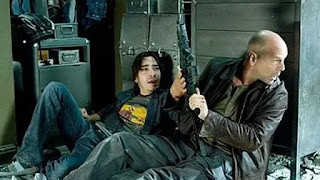 Things just get worse in Live Free or Die Hard (2007), a sequel caked with 12 years of dust. This time McClane teams up with a hacker played by Justin Long to rescue McClane's daughter (Mary Elizabeth Winstead) from bad guy Timothy Olyphant. In some ways, Live Free is the worst of the series. For one thing, McClane's not really the main character. He's just here to be the grumpy old sage to Long's morally conflicted hacker, the only character in the movie with an actual story arc. For another thing, this is the point in the series where McClane stops being a recognizable human with the capacity to be hurt. He stands on a spinning jet plane, jumps out of a speeding car onto pavement at 80 miles an hour, shoots himself in the chest at point blank range, ect, all without doing more than grimacing. Add in Olyphant's bland villain and a PG-13 rating, and you get a series in freefall. 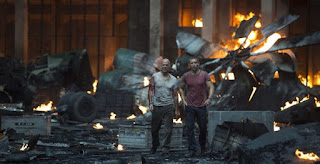 Last and least is 2013's A Good Day to Die Hard which finds McClane traveling to Russia to help his son (Jai Courtney) fight some terrorists. Wheezing and out of ideas, the film dusts off the McClane-reunites-with-his-estranged-family plot for the fourth time to zero emotional effect. We've seen this blood-soaked McClane family reunion before, but the father-son dynamic only encourages the filmmakers to up the macho bullshit, and so we have John and John Jr. dropping off buildings through fifty layers of glass and fire, only to emerge strutting and laughing at the end. A cold and stupid movie, Good Day is a long, long, long way from the first film, the most riveting scene of which involved McClane pulling a single shard of glass from his foot and tearfully confessing his love for his wife. The 2013 McClane, by contrast, is a video game character, endlessly rebooting to the same level of physical invulnerability and emotional obstinacy.

Which brings us back to Die Hard 2. It's the only sequel that doesn't rehash the family dysfunction plot. Instead, it accepts the happy ending of Die Hard and builds on it. John and Holly, despite only sharing a single scene at the end, are a likable couple, flirting on the phone at the start, and rising to the challenge in parallel story-lines when everything goes wrong. 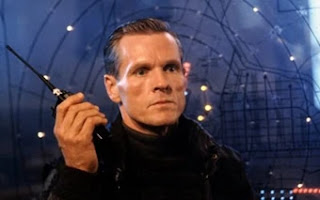 Speaking of the "going wrong" part: while William Sadler is no Hans Gruber (hey, nobody is), but his cold right-wing terrorist Col. Stuart is the only post-Hans villain who seems to pose an actual threat to McClane. The scene where he downs a commercial  jetliner, killing hundreds of people on board, is one of the most effecting scenes of villainy in the series. 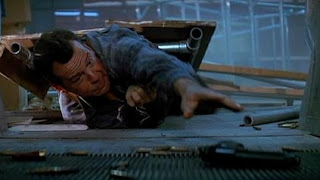 Renny Harlin directs the action scenes here with speed and precision, while keeping McClane within the general vicinity of recognizable humanity. Where the first film found him shoeless and shirtless (which rendered him more exposed than the typical action hero), this one finds him gasping for breath and shouldering against the cold as he runs all over the snowbound airport fighting bad guys. The shootout on the conveyor belt is particularly effective because Willis plays it scared. Pinned down under some collapsed scaffolding, he desperately crawls for a gun as a goon charges at him. That moment of fear -- the "if I don't get this gun that guy is going to kick my ass and kill me" -- doesn't really have an analog in the later films in the series. The McClane of  Die Hard 3, 4, and 5 can be wounded, but he can't be scared because he's lost the ability to die. 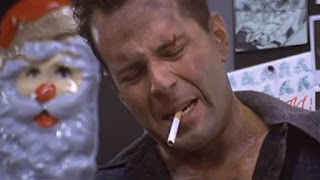 Die Harder features Willis's lightest turn as McClane. He's flirtatious (with both his wife and a pretty girl at the airport), he's still funny (muttering to himself, "Oh, we are just up to our ass in terrorists again, aren't we, John?"), and he's resilient in the action scenes without being superhuman (I've always loved that in the final fight on the wing of the plane with Sadler, he more or less gets his ass kicked). He's still, well, John McClane, a character you enjoy spending time with, a guy you can root for because you like him. 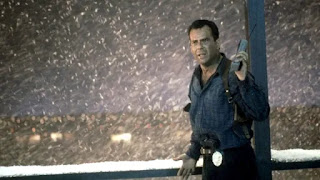 The original Die Hard is a masterpiece of its kind, one of the best action movies ever made, going on a shortlist with films like Raiders of the Lost Ark, The Bourne Ultimatum, and, more recently, Mad Max: Fury Road. If Die Harder doesn't quite belong in that elevated company, it still deserves to be seen as a worthy successor to the original. It's a movie that doesn't take itself too seriously, a holiday action blockbuster sequel that understands what it is trying to do (i.e. rip off the original) and manages to do so without turning dour or cynical in the process.
Posted by jedidiah ayres at 6:14 AM