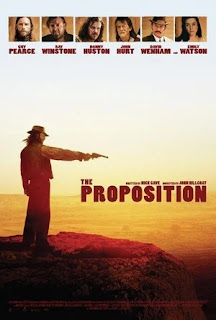 Christmas Day is brilliantly used in John Hillcoat’s The Proposition, the bloody Australian western and modern classic from 2005. Firstly, it provides a ticking clock for bandit Charlie Burns’s mission. Captured along with his brother Mikey by Captain Stanley and his troops in an ambush that opens the film, Charlie is offered a, you know, proposition: Kill and bring back his older brother Arthur by Christmas Day or gentle Mikey will be hanged. The Jesus B-day deadline puts pressure on the journey but also underlines how biblical such a premise is. Betray the evil brother Arthur, who Charlie and Mikey previously abandoned after he massacred the Hopkins family who were friends with Stanley and his wife Martha, to save the good one.

While we’re hovering around Cain and Abel territory, let’s discuss Morris and Martha Stanley’s little Eden in the meatiest Christmas connection A film in large part about the tragic hubris of colonialism, Christmas in all its 19th Century British genteelness is a major aspect in illustrating Stanley’s delusions as a heroic conqueror. Captain Stanley has aims of civilizing the land assigned to him and ridding it of Arthur Burns is a large piece of that plan, but in the meantime he intends to keep his house and his wife free from the viciousness around them. He expects his men to be groomed in his wife’s presence, for them to never discuss police matters while she is in earshot. She keeps a lovely house surrounded by a modest garden and a little fence that is a bad joke- it could never keep anyone out and there’s no neighbors around to even care about things like where the property line ends. 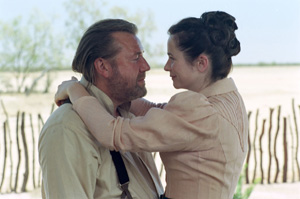 While everyone in town and in the hills is shown covered in red dirt and sweat, Morris and Martha always wear fine clothes and are nicely powdered and coiffed while at home. After he helps them unpack their imported Christmas tree, Stanley sends their Indigenous servant home. The man goes outside and takes off his shoes at the fence gate, wishes the Captain a Merry Christmas, and walks barefoot into the desert. Then the English couple have a candlelit dinner in front of a decorated tree with presents and cards in its branches. After carving the turkey and making lovely plates, they say a prayer and toast each other a Merry Christmas. It’s the ultimate scene of domesticity, a painstakingly recreated version of the long-held traditions of their previous homeland. Naturally, this scene, their home and their persons are brutally violated by precisely what Stanley has tried to keep at bay immediately following this toast.

By this point in The Proposition Captain Stanley hasn’t kept up his end of his bargain i.e. he hasn’t kept Mikey alive and likewise Charlie has failed to kill Arthur. As revenge for Mikey, Arthur and his psychopathic protege Samuel Stoat ruin the Stanleys’ Christmas. A candelabra is blown out and the locked door blown in by rifle blast and Stoat is left to watch Martha at the dinner table while Arthur takes Stanley off-screen and beats him nearly to death. With the muffled sounds of blows to Stanley’s body in the background, we watch the child-like Stoat feast greedily and admire some earrings gifted to Martha and insist she read to him what Stanley wrote to her in his card. 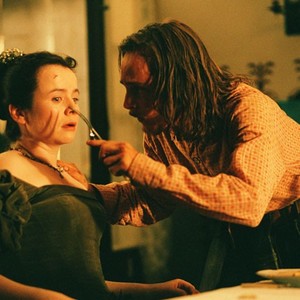 Of course, when she tries to get up from the table the comically innocent reverie is interrupted by his assurance to her that he will stab the carving fork through her eye if she moves again. When Arthur calls them into the room Stoat drags her by the hair and Stanley is made to watch Stoat rape his wife while singing “Peggy Gordon.”

After we watch Stoat and Arthur truly trample with their full weight and power any notions of civility out of the Stanley’s quaint playacting of British holiday festivities, it is Charlie’s turn to resolve what he can of his bloody arc. Having buried Mikey while his brother and Stoat went ahead to the Stanleys, he shows up mid-rape to stop from happening what he didn’t at the Hopkins household. He puts a bullet through Stoat’s brain and Arthur barely flinches since, naturally, his brother could never do such a thing to him. When Charlie puts one in his gut and one in his chest Arthur is genuinely surprised. He stumbles out of the house and crashes through the sad low fence to watch his last sunset free of the Stanley’s Lil’ Britain. Charlie sits beside him and stares at the coming darkness. Arthur acknowledges that he has been bested before asking what Charlie’s going to do now. Then he dies and leaves him alone on Christmas to puzzle it out in the fading light. That he doesn’t go back inside and kill Stanley for his part in Mikey’s death is a Christ-like mercy in the world of this film. Who is to say he doesn’t while the credits roll?

It’s a Christmas movie befitting our current holiday season. One man is left without any family to celebrate with while another’s attempt at family holiday normalcy is violently disrupted. Those of us not living with families or friends can relate to the former this year while almost everyone can relate to the latter. Let’s hope Christmas 2021 brings to mind a Crimesmas movie with a happy ending, one of the Shane Blacks, maybe.

Pete Dragovich used to regularly review stuff as the Nerd of Noir for places like Crime Factory and Spinetingler. Now he just writes a little something about everything he watches at letterboxd (Nerd_of_Noir) and puts up a few words on twitter (@nerdofnoir) about everything he reads. He lives in Minneapolis.
Posted by jedidiah ayres at 12:38 PM