Call me old fashioned, but nothing gets me in the Xmas spirit than a down-home, heartwarming holiday classic movie. I’m talking about the true classics. It’s not Christmas at my house until Hans Gruber falls off the top of Nakatomi Plaza. The need for lighter fare calls for Kiss Kiss Bang Bang. Not to mention the “Bloody Christmas” in L.A. Confidential. Also, if you haven’t seen Rare Exports yet, you better remedy that shit, toot sweet.

However, this year—2020—has been “extra” and it will require a bit more than Elf, Bad Santa, and the old yippee-kay-yay.

Thank the gods for a new slate of holiday movies that may or may not be introduced into the canon. 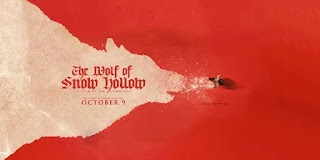 First up is The Wolf of Snow Hollow.

This movie will scratch itches you didn’t know you had. The movie is written/directed/starring Jim Cummings (Thunder Road) who really knows what tools are in his box. His portrayal of Deputy John Marshall is one of the best holiday performances we’ve seen since that kid stuck his tongue to the frozen light pole. Marshall is clearly out of his own element, having been assigned to investigate a series of gruesome (highlight that) murders in a small, snowy Utah mountain town, all while his personal life is falling to pieces. 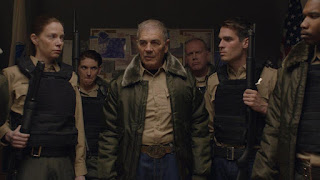 How Christmasy is it, you ask? Not very. Not even a little bit. But they do pipe in some Christmas carols into the soundtrack, almost as an afterthought, which means they at least knew what time of year people were most likely to stream this bad boy. But there is a message about family embedded into this film (I think) and it features Robert Forster’s final role, so go get you some. 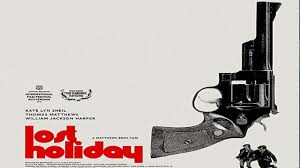 Listen, I like drugs as much as the next guy, so long as the “next guy” has a head full of LSD. However, this movie was not for me. The plot centers around a couple of bored twenty-somethings who return home from New York City to their small town and have nothing better to do than get fucked up and half-ass investigate a crime. The crime element appears as slapdash as the Christmas carols in The Wolf of Snow Hollow, but it’s not even at the top of the list of things you will just have to “go with” while watching this film. To its credit, there is one moment in the film which manages to wrench some heart strings, but the mumblecore, the acting, the shaky camera work all adds up to feeling like you’re stuck watching your buddy’s student film during a lame Christmas party full of tacky sweaters. 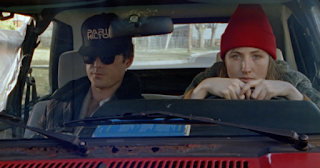 How Christmasy is it? Well, it actually takes place during the weeks of Christmas and New Year’s, so that counts, and anyone who has ever had to return home can easily relate to the central premise. And furthermore, the last line alone will make you want to axe-murder your entire family, which earns its spot on this list. 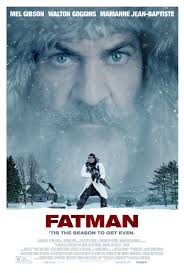 But if there is one holiday movie that belongs on the top of everyone’s holiday viewing list in 2020, it’s Fatman.

You read that right.

Fatman has everything 2020 has, needs, and deserves. There’s a spoiled rich kid who’s never been told “no.” There’s ridiculous government overreach. And, oh yeah, don’t forget about your racist uncle.

Fatman is lean, mean, and pulpy AF. It’s the film you would get if someone gave Adam Howe a sleigh full of money to make a holiday film. 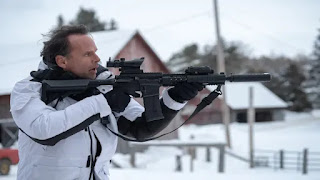 An economic downturn forces the Kringle family to become a subcontractor for the American military, and the strain of this decision can be read all across Mel Gibson’s timeworn face. With only his top elf Seven, and the perfectly cast Mrs. Claus, he bemoans the state of the American youth, which is personified by an evil rich kid who declares vengeance after receiving nothing but coal from Santa. That vengeance is delivered in the form of Walton Goggins, who goes balls out to replace Alan Rickman as Xmas Baddie #1. There is great joy in watching a megalomaniacal super villain get his origin story, as well as the inevitable comeuppance that will soon be meted, but I digress, lest I veer too hard into spoiler territory.

All you need to know is that this flick is streaming on Amazon prime and you can watch it right now if you wanted. Sometimes you are looking for the right movie, well look no further. 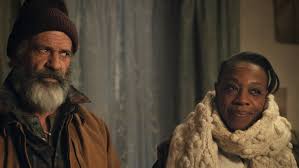 And think of all the arguments you can have with your friends after you tell them how much you think Fatman is the best Xmas movie of 2020. In fact, feel free to start some right now in the comments. I’ll @ the living shit out of you. 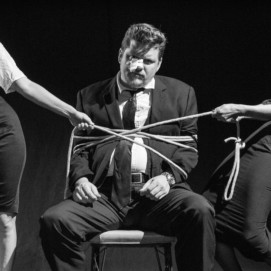 Eryk Pruitt is a screenwriter, novelist, filmmaker, bar owner, and true crime investigative journalist who more than likely ate the milk and cookies your mom left out for him last night.
Posted by jedidiah ayres at 5:41 AM