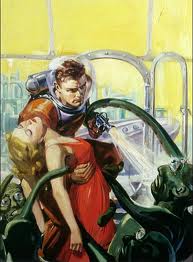 S'okay, my new hardboiled science fiction pulp story Down, Down, Down, Burns, Burns, Burns is up over at Beat to a Pulp and while I slightly exaggerated my offense to the very dedicated and talented David Cranmer in the previous post, (turns out I'd sent him the wrong draft of the story - not an entirely different story), I would like to thank him for believing in it enough to stick with me/it through several drafts as I waffled about silly things. I did have fun writing it, (my first attempt at Sci-Fi since sixth grade) and may go back and try another speculative piece soon. While we're on the topic of firsts, the Crimefactory antho will feature my first foray into westerns while my second will appear in another anthology later in the fall. I'm enjoying getting out and exploring unfamiliar terrain.

At Ransom Notes I'm interviewing the one and only Lawrence Block about his new one, A Drop of the Hard Stuff as well as his latest Jill Emerson excursion into sex and violence, Getting Off. Speaking of grand masters, I'm excited about Robert J. Randisi's third, (and it looks like final - but with Bob, you never say never), Nick Delvecchio book The End of Brooklyn, while Sara Gran's Claire DeWitt and the City of the Dead takes the PI novel down a decidedly different path into the future. Next up, Sin Soracco's Low Bite and Jason Starr's The Pack.


Summer travels will take me to Colorado in a few weeks for a rowdy week of carousing with Tom Piccirilli, Jon Bassoff, Benjamin Whitmer and Stephen Graham Jones. Or maybe just seeing some family. But hey, I've been known to enjoy a good carousing. And I hear that Scott Phillips will be headed to Texas and the set of Terrill Lee Lankford's filmed take on Joe Lansdale, Christmas With the Dead. Carousing guaranteed.

Have you got your summer travel plans together? Do they include St. Louis? They should. There are a handful of N@B events looming in the realm of possibility not to mention Steve Earle - doing books - Donald Ray Pollock and something called Bouchercon. But for Pete's sake be here Saturday June 11 for N@B featuring Aaron Michael Morales author of the hardcore Drowning Tucson and Frank Bill for his pre- Crimes in Southern Indiana tour.
Posted by jedidiah ayres at 9:37 AM

Labels: Interview, NoirBar, Patting myself on the back, Ransom Notes

Congrats on DDD,BBB pub! Looking forward to the Block interview. You are one busy, hardboiled writer dude!

I will be in St. Louis. Not sure why but it's a step up from Detroit, I hear.

Patti - you're coming for B'Con? Or you coming through otherwise?

Thanks, JJ - they're more if you're buyin