My Felonious Valentine: Christa Faust on Films Inspired by The Lonely Hearts Killers 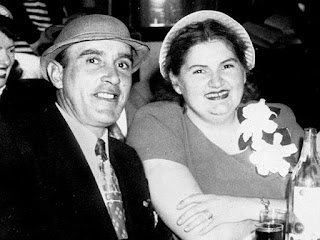 Do you feel as if something is missing in your life? Do you long for an adaptation of the infamous Lonely Hearts murder case that seems like it was made just for you? You may now rest assured that such a film does indeed exist. Through careful screening and meticulous research, Mistress Christa has assembled a list of congenial, respectable and eligible films for your consideration. Simply send a self addressed, stamped envelope, along with all your money, to Mistress Christa’s Noir City Friendship Club…

… or, you know, just keep reading.

A quick rundown of the details in the real case: 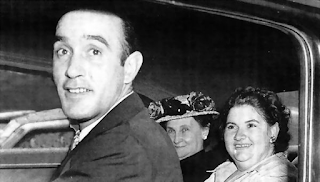 Raymond Martinez Fernandez was just a two-bit bunko artist with a traumatic brain injury and delusions of voodoo-enhanced romantic grandeur before his Lonely Hearts letter-writing scam hooked him up with 200lb Martha Beck. The girthy nurse abandoned her children to be with him and got involved in his schemes by posing as his sister to lend him respectability. She was madly, passionately in love, kinda like Claire Trevor was with Larry Tierney in Born To Kill. Not in spite of his homicidal tendencies, but because of them.

Fernandez had already poisoned one of his marks on a Spanish holiday and wrote himself into her will, but it was Beck’s violent, jealous rages that caused their criminal endeavors to escalate to a new level of brutal intensity. She killed one of their victims with a hammer after finding the widow in bed with Fernandez and drowned another’s toddler daughter in a basement tub. They were dubbed The Lonely Hearts Killers during the media circus that surrounded their arrest and execution, and are thought to have murdered as many as twenty women.

Now, on to the flicks. 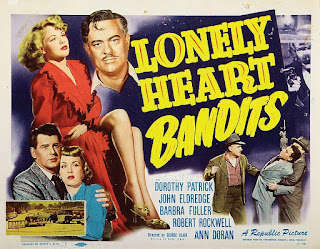 Republic must have been banged out this B picture in record time to try and capitalize on the publicity surrounding the real life case. After all, Fernandez and Beck had just been arrested in March of the previous year. Oddly enough, this is also the one version that deviates the farthest from the true story.

A pair of con artists, played by Dorothy Patrick and John Eldredge, meet through a dating club and decide to team up and double their profit. They take turns playing the love interest while the other plays the sibling and quickly graduate from bunko to murder.

After killing a naïve rancher for his stash of cash, they set their sights on widow Ann Doran. She takes the bait, dumps her previous boyfriend and agrees to marry Eldredge. But it’s only a matter of time before jealous Patrick snaps and shoves her off the back of a moving train.

Unfortunately, she’s not dead. She’s in a coma, listed as a Jane Doe in another county, while the scammers continue to work the rest of her family into thinking that everything is on the level. But the widow’s former lover smells a rat and starts investigating, along with her adult son and his girlfriend. They get the cops involved and it all leads up to a big shoot out at the con artists’ hideaway in the woods.

Of course, there’s a happy ending. The widow wakes up from her coma and realizes that her old boyfriend has been the one for her all along.

This is an entertaining little crime flick and my only real complaint is the character of the dull, sexless, goody-two-shoes widow. I have to admit that I cheered when she was thrown off the train and wished it had happened sooner. This also made the obligatory happy ending that much tougher to swallow. On the other hand, I loved Dorothy Granger as the feisty and felonious owner of the dating club. I could have done with more of her and less of Doran.

While it’s not bad, it doesn’t really deliver in the true crime department. The only thing this flick has in common with the real life Fernandez and Beck case is the premise of criminals hooking up through Lonely Hearts clubs and going on to scam and kill additional victims as a team.

You won’t watch anything made after 1959,  like happy endings, and prefer your sex implied and your murder limited to people bloodlessly clutching their chests and falling over. 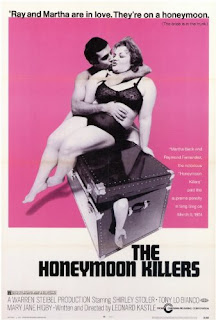 This film seems to pride itself on its gritty, unglamorous, documentary-style realism and covers virtually every sordid detail of the real case. The hammer murder scene is shockingly intense and explicit.

There’s tons of clever analysis out there for this one as well as plenty of interesting behind-the-scenes action, including the fact that young Martin Scorsese was hired to direct and subsequently fired for not shooting fast enough. But, like Leonard Kastle, who eventually replaced him in the director’s chair, I don’t have time for all that arty, intellectual shit. I’ve got a deadline to meet.

So let’s just put it this way: I love this one. I think you will, too.

You’re a stickler for real life facts, prefer black and white, and enjoy sleazy titillation on a shoestring budget. 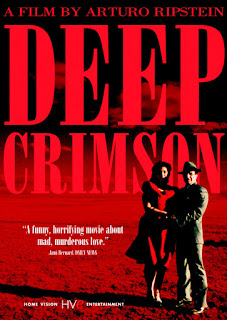 This lush period version is set in Mexico and offers up another authentically fat Martha, renamed Coral. She is unapologetically in-your-face about her weight and wields her size like a weapon. When she catches her Lonely Hearts lothario, renamed Nico, stealing money from her purse, she jokes that she doesn’t mind paying “fat tax” in exchange for sex. She threatens to kill herself in his apartment, claiming that it would attract the police because she’s too heavy for him to get rid of her body.

The plot sticks relatively close to the real story. It includes her choice to abandon her children to be with her lover (one detail left out of the 1969 version) but not the voodoo angle.

This film has quite a lot of dark humor and often makes you laugh and squirm in the same scene. There’s one bizarre and perverse scene that I particularly loved, in which Nico begs Coral to punish him by stepping on him with her shoes on, “like a worm” and she responds by tearing up his toupee with her teeth. But there’s nothing funny about the ending. It’s as harsh and bleak as they come. Also, the way the child’s murder is handled is superb and doesn’t pull any punches. It’s my personal favorite version of that incident, though it may be too disturbing for people who can’t stand to see harm come to a child.

You want to brush up on your high school Spanish, dig a little deadpan black comedy before your unhappy ending and like big butts and cannot lie. 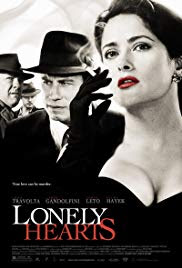 I have mixed feelings about this film. For starters, everyone is A-list Hollywood attractive. Not only is Martha not fat in this version, she’s Salma fucking Hayek. I did enjoy Jared Leto’s smarmy, bantamweight swagger in the role of Fernandez, though it seemed like an odd choice to reverse the pair’s ethnicity.

That being said, Hayek crushes this role. She is everything you want in an old-school femme fatale, gorgeous, ruthless, manipulative and utterly amoral. Is she Martha Beck? Not really. But as a classic film noir fan, I was willing to give her a pass for pushing all my personal buttons. Her defiant delivery of Martha’s real last words in the electric chair was one for the femme fatale hall of fame.

I was less thrilled about the addition of the cop characters. Don’t get me wrong, I loved seeing James Gandalfini doing Broderick Crawford and enjoyed his narration. But I didn’t really love John Travolta in this and honestly enough already with the cliché of the tortured detective who can’t deal with live women but is obsessed with avenging dead ones. If you ain’t Ellroy, don’t try to be.

Your mileage may vary.

You’re a sucker for an old school Femme Fatale, will watch anything with James Gandalfini in it, and like Salma Hayek’s butt and cannot lie. 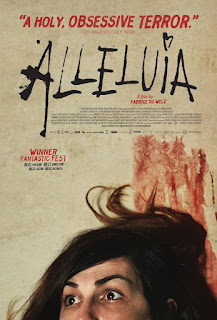 This modern Belgian version starts with full frontal male nudity and never lets up. It is raw, relentless and unflinching with tons of explicit sex and brutal gore, yet never once felt gratuitous to me. It’s like you’re spying on the unflattering and unplanned lives of real people. People who happen to fuck and kill a lot.

Both the leads are good, but Lola Dueñas is absolutely brilliant as the Martha character, renamed Gloria. She’s not particularly overweight, just an ordinary middle aged woman, but her portrayal of voracious sexual hunger and uncontrollable jealous rage is mesmerizing and unforgettable. Oddly enough, the character’s ethnicities are also reversed here like they were in Lonely Hearts, with Gloria being Spanish and Michel (the Fernandez character) being from the country in which the film was made. But somehow, it works.

This film is the one that dug the deepest into the voodoo/black magic aspect of the real case. That’s not really my personal favorite topic, but it’s handled deftly here and adds to the overall feeling of delirious, headlong physical and emotional frenzy.

On the other hand, there’s the foot worship scene. Which is one of my personal favorite topics, in film and in life. I was blown away by what is without a doubt the single hottest and most intense foot fetish scene in a mainstream film.

This would have been my favorite version if they didn’t let the kid live at the end.

You have a foot fetish and love NC-17 level sex and gore but cannot tolerate the death of a child. 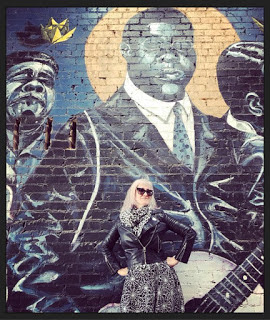 Christa Faust is the author of several novels, including Choke Hold, Money Shot and Hoodtown. Money Shot was nominated for an Edgar award, Anthony award and Barry award, and won a Spinetingler award in the ‘Rising Star’ category. She worked in the Times Square peep booths, as a professional dominatrix, and in the adult film industry both behind and in front of the cameras for over a decade, starring in dozens of racy fetish-oriented videos. She also wrote and directed a four-part bondage adventure serial called Dita in Distress, featuring world famous Burlesque queen Dita Von Teese. Faust is a Film Noir fanatic and an avid reader of classic hardboiled pulp novels, and an MMA fight fan. She lives and writes in Los Angeles. Keep up with Christa at her website and follow her on Twitter @FaustFatale
Posted by jedidiah ayres at 6:36 AM