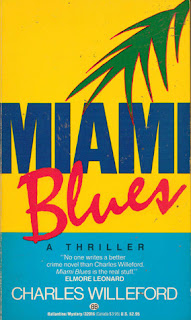 Charles Willeford's 1984 novel Miami Blues introduced Hoke Moseley, a literally toothless police detective, who would become the anchor of Willeford's only series. The series brought some of Willeford's biggest sales and might be what he is now most widely known for, but turning Moseley into a series character doesn't appear to have been the author's instinct (Grimhaven, the first sequel he wrote, left no room for further Hoke books and was so appallingly dark it was never published - the series stands at four officially with New Hope For the Dead, Sideswipe and The Way We Die Now following Miami Blues).

I'm glad Hoke got a series, they're fun and weird and worthwhile, but Miami Blues really belongs to Hoke's antagonist, Fred Frenger Jr. a con man with frighteningly violent capabilities who steals Hoke's badge and gun (even his dentures) and goes on a crime spree around Miami impersonating a policeman. 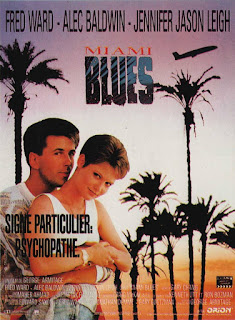 George Armitage's 1990 adaptation of the novel was produced by Fred Ward who also starred as Hoke after relinquishing the role of Junior to Alec Baldwin. The fact that we never got more Ward as Hoke movies is too bad, but the fact that we did get a tonally amazing little film with a scene-stealing, star-making turn from Baldwin is perfect.

Freddie stole the story from Hoke, and Baldwin stole the role from Ward, but Jennifer Jason Leigh stole my heart.

She plays Susie, a call girl and student - half-worldly, half naive - who falls into a relationship with Junior who she's not sure she if she loves, but he's sweet to her. 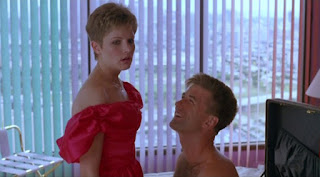 He's a shit, really, but he can be sweet in his way. That sweetness is important to the audience's affection for him. Junior is a scam artist and violent psycho whose fortunes are amusing to track as they rise and fall by balls and luck, but without that sweet side that only Susie brings out, he'd be only be entertaining for a little while instead of memorable for decades. 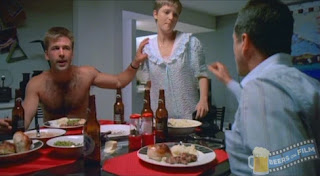 Of course the same sweetness that makes him lovable, makes him vulnerable. Without it he'd never have kept Susie for as long as he did, but he may not have lost her either. When Hoke tells Susie the truth about Junior it sounds unbelievable to her. Junior told Susie he was legitimate and the cop is trying to convince her that Junior is a dangerously violent criminal... 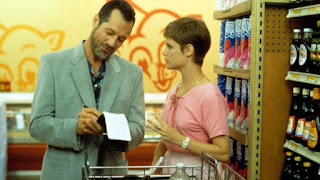 That would mean Junior had been lying to her. It would hurt, but he could be a liar. What is definitely true is that Junior is sweet and would never hurt her feelings. So she conducts a test to determine the truth about Junior. She deliberately fucks up a pie she's making for him.

When Junior comes home from a hard day at work she serves him dinner. That's their routine and it gives them both pleasure. He makes the money, she makes the home (Corny? Sure, but it's a blissful symbiosis for a little while). When Junior bites into the bad pie we can see how awful it tastes. His eyes are watering and he chokes trying to answer her when she asks if he likes it.

Of course he does. He tells her she's a great cook and she's made just about the best pie he's ever had in his life. 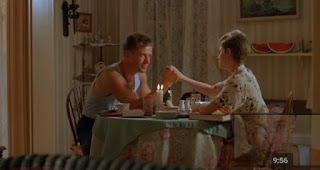 In a movie full of outrageous scenes that make me laugh and cringe, it's this perfect little romantic atomic sourball of an exchange that's my favorite and really makes the movie stick.
Posted by jedidiah ayres at 6:28 AM