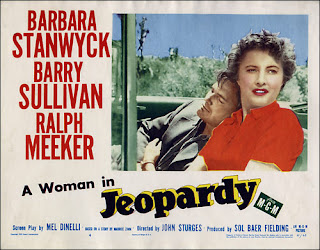 “Don't let go while I'm hanging on
’Cause I've been hanging on so long
It's so hard to be all alone
I know you’re not that strong”
- “Jeopardy,” Greg Kihn Band, 1983

Surely Barbara Stanwyck, Barry Sullivan, Ralph Meeker and director John Sturges made better films than 1953’s just-over-an-hour-running-time programmer Jeopardy, released thirty years before the Greg Kihn Band’s earworm burrowed its way through MTV and FM radio all the way to the #2 spot on Billboard’s Top 10. But (and bear with me here) both the 1953 film and the 1983 music video shared a theme of a couple in trouble, split apart by demons and circumstances beyond their control, an explicit test of their matrimonial bond.

Okay, I admit. It’s a stretch.  Let’s get back to the movie. 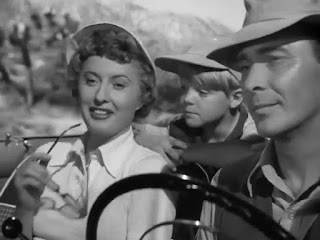 Jeopardy begins with wife and supermom Barbara Stanwyck riding shotgun as hubby Barry Sullivan aims the hood ornament of the family sedan southward to Old Me-Hee-Co while son Bobby (The Adventures of Rin Tin Tin’s Lee Aker) plows through a box of crackers and cracks wise between them. Babs has the picnic all ready to go once the family reaches their isolated fishing beach destination at the tail end of Baja California, checkered tablecloth and coffee camp pots. Barry is the poster boy of 1950s Dad vibes, short of the imaginary pipe dangling from his lips. But what isn’t imaginary is the pistol he’s got in the back seat, so he and Bobby can shoot at beer cans when they hit the beach. Mom wisely puts said pig iron in the glove box where it’ll be safe until the third act. 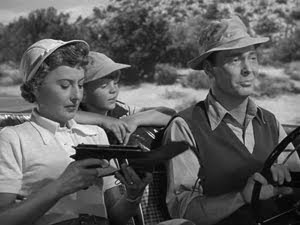 “Bienvenidos,” Daddy-O reads the roadside sign and explains as they enter Tijuana. “That means ‘welcome.’”

The car overheats. Stanwyck admits she forgot to fill the water can at the last stop. They roll into a middle-of-nowhere garage, last chance for gas for so many miles, but the place is deserted. They cool down the engine and head on. 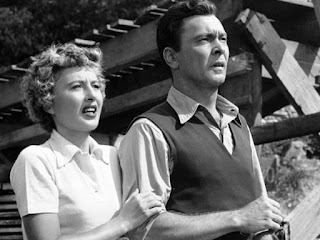 They reach the magical inlet of Barry’s younger days when he and his old fishing-and-drinking buddy went down South and boy, you shoulda seen the size of the monsters they dragged from the Sea of Cortez, there’s a snapshot in an album he’ll be happy to show you when they get back home… But now, all these years later, Barry’s old buddy gone heavy and succumbing to male pattern baldness, the pier has also fallen into disrepair, all jagged planks and precarious stretches of rotting, nail-spotted beams like an invitation to tetanus.

Undeterred, they set up camp and isn’t this swell. You, me and little Bobby… who has wandered off… but let’s make out for a minute… he’ll be fine… where is that little sonofabitch, anyway? Bobby! Son! 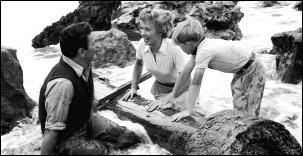 Short story long, Bobby’s been imagining life as a cabin boy at the far end of Ramshackle Row, and when Pops goes out to help him, the boards break and Pops ends up on the ground under the pylons, stuck between a rock and a hard place. It won’t budge, and the tide’s coming in, and Bobby stays behind with Barry while Babs gets back in the car to look for help. 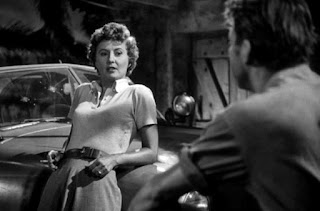 She returns to the deserted pit stop, only this time, she finds escaped convict Ralph Meeker, looking the worse for wear and pleads with him to come help her husband get free from his soon-to-be watery undoing. But Meeker’s got other ideas, get me, like absconding in a clean getaway car, and make sure you don’t get any ideas, lady.

“Behave now or this is gonna blow a real pretty piece of you over the side,” Meeker says.

There is real sexual energy here. Dangerous. The kind we haven’t really seen between Babs and Barry. But with Meeker, it’s different. Instant. There’s a feral sexuality, an animal attraction mixed with abject disgust. Like we like it. Hello, film noir, how’ve you been, glad you showed up. 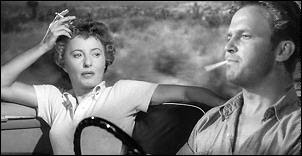 The rest of the film - all of the film, frankly - plays like a radio drama stretched for time. A simple conceit - how far will a woman go to save her husband; a ticking clock - the water’s four feet high and rising back with husband and son. And there’s a couple of cars of Mexican federales patrolling the dirt highways looking for escaped gringo killers.

There’s a dance of misdirects: Will she pull the pistol from its hiding place and get Meeker’s help at gunpoint? Will she club him with a tire iron when their wheel goes flat? 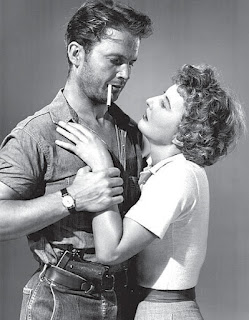 “When was the last time you…”

She lets the word hang in the charged space between them.

She asks it again.

The tension is high. Our love’s in jeopardy. I won’t squander the film’s few and simple pleasures with any more spoilers, but if you’re so inclined, check out Jeopardy, the kind of a picture that has stars too big to be the bottom half of a double feature, a novella that teases a catalyst and doesn’t really care about the consequences. 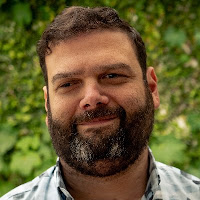 Álvaro Rodríguez is the co-creator/executive producer of Netflix’s Seis Manos, a “Mexicanime” adult animated series set south of the border in the 1970s. He’s currently writer and co-producer of an upcoming Showtime drama series, Rust, with Jeff Daniels.
Posted by jedidiah ayres at 8:11 AM