My Felonious Valentine: Johnny Shaw on The Bodyguard 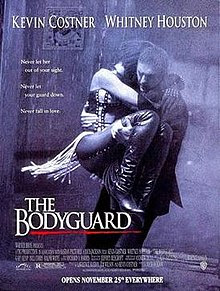 This is for Valentine’s Day or Valencrimes Day or whatever Jed is calling it, so I’m going to make this a personal Valentine.

Way back in the last century, in a time known as 1993, I met a lady named Roxanne. I was young. She was young. We were young together. That same lady is now my wife. As of today, we have been together over 26 years (I even did the math for you). We’ve traveled the world together, felt heartache and loss, laughed our asses off, and made a unique and special life together. Those first 26 years have gone so well, I’m considering giving it another 26 years to make sure it wasn’t a fluke.

I would be remiss if I didn’t mention how amazing Roxanne is. She’s amazing. There, I said it. I love her in gigantic ways. She’s cool as shit and makes me a better person.

Don’t worry, I’m getting around to talking about the movie. But not yet.

I’m a white guy. (I’m not bragging. It’s for context.) Roxanne is mixed race. As the product of a liberal West Coast environment, we’ve been very lucky that the differences in race have not been an impediment or obstacle in our relationship in any noticeable way. I know that is not the case for every interracial couple. However, if I let movies be the window into society (I shouldn’t. Nobody should.), race is the only obstacle people in interracial relationships ever face, both internally and externally. According to movies, if you’re in an interracial relationship, you’re going to talk about it a lot. And everyone in your life--family, friends, a random taxi driver--is going to have an opinion about it.

Roxanne and I met in Santa Monica. She’s from there. I lived in Venice for most of my twenties. It wasn’t until we eventually moved to Portland, Oregon (aka, the whitest US city where I’ve ever lived) that I began to see an awkwardness around people. Roxanne has always had to deal with the “What are you?” people or the dreaded “Can I touch your hair?” ladies. Those had never gone unnoticed, but in a city frothing with white guilt, it was much more apparent that we looked different than other couples. Not in a threatening way, but closer to a curiosity. We got fewer looks the last time we were in Zagreb.

I’m not saying I don’t see color. I’m not a moron. But I don’t care about race when it comes to the people in my life and particularly the woman I love. I am aware when I’m the only white guy at a family gathering or that she’s the only non-transparent person among my relatives. However, if anyone told us that we shouldn’t be together because different races shouldn’t mix, it would be hard to do anything but laugh. It feels so childlike in its simple-mindedness and stupidity. It’s hard to believe that until 1967 we couldn’t have been married in some states. That’s fucking crazy to me. 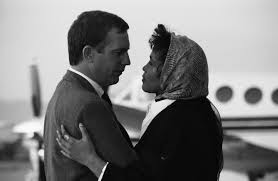 Which brings me to the 1992 Kevin Costner/Whitney Houston movie The Bodyguard (finally!). The reason we’re all gathered together today.

If you are not aware of the movie. Here’s the quick and dirty synopsis. Kevin Costner plays Frank Farmer, a professional bodyguard tasked with protecting Rachel Marron (played by Whitney Huston) an actress/singer diva who has been receiving death threats. Conflict, conflict, conflict. Tension, tension, tension. Hitman, kiss, they don’t end up together so that Whitney can sing “I Will Always Love You.” Roll credits. 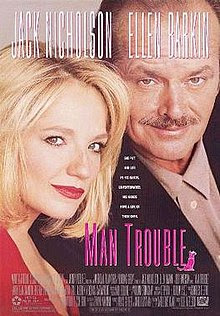 It’s not a particularly good movie, but not as bad as its reputation (Seven Golden Raspberry nominations? So, I guess we’re just pretending that Man Trouble and Toys didn’t happen.). The story is familiar in many ways, the end is predictable and a bit forced, but it plays out as expected. To be honest, I’m not really interested in writing about the movie’s story. As you may have guessed from the context, I’m really only interested in one unique element.

The Bodyguard was the first movie that I can remember seeing that focused on an interracial romance where race wasn’t the primary obstacle. In fact, race never really comes up in the story. That wasn’t just novel, but revelatory. The fact that I saw it in 1993, the same year I met Roxanne made it resonate that much more.

There are dozens of movies that precede The Bodyguard that depict interracial relationships. For historical context, The Bodyguard came out one year after Jungle Fever and Mississippi Masala and the same year as Zebrahead, all movies with interracial romances at their center, but also where race is the central conflict. The only other movie I remember from around the same time where that wasn’t the case was Boiling Point with Wesley Snipes. Race is not a factor in his relationship with Lolita Davidovich’s character, but it is only a minor aspect of the movie. (I might have to write something about Boiling Point The cast alone deserves an award.) 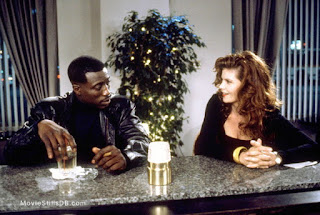 I understand that when creating drama, a writer looks for conflict. There’s nothing wrong with the depiction of race as the central conflict in an interracial romance. I’m sure more couples than don’t deal with families, friends, and environments that create an antagonistic world for their relationship. Just because Roxanne and I have been lucky doesn’t mean that that’s everyone’s experience.

But as long as interracial relationships are only depicted as love in the face of society’s disapproval, it shows the relationship as one in which conflict is unavoidable. What I wanted to see was an interracial relationship that dealt with all the complexities of any relationship. Roxanne and I have been together a long time. Trust me, there is enough in there for solid drama or comedy. Essentially It's a Wonderful Life or even The Thin Man, but not two white people. Not as some fantasy, but a simple relationship between two people, nothing strange or odd about it. I fell in love with Roxanne because she’s smart and funny and beautiful and creative and all the things that I can’t define that make a romance work. 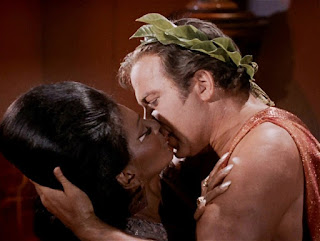 The Bodyguard deserves its place in delivering the simple message that an interracial romance is normal. The film version of the Kirk/Uhura kiss. It was a big budget movie. It was a box-office success that reached a large audience. It’s still the bestselling movie soundtrack of all-time. The iconic image of Kevin Costner carrying Whitney Huston is a part of pop culture iconography. Fun fact: The woman on the poster is actually Whitney Huston’s stunt double. Another fun fact: The Bodyguard was originally written in the 1970s by Lawrence Kasdan for Steve McQueen and Diana Ross (I would have watched the shit out of that movie, but also interesting that the interracial element was always there, but still not important to the plot). 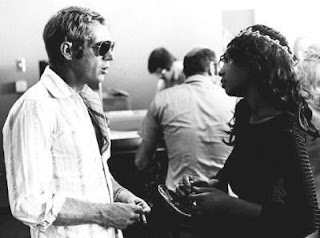 Almost 30 years later, I’m starting to see more and more interracial relationships that are treated as commonplace. In movies a little bit, but television has taken up the slack. The Good Place, Scandal, Master of None, The Mindy Project, Brooklyn Nine-Nine, The Chilling Adventures of Sabrina, and a whole slew of other shows have been cast and written in a way that shows interracial relationships, but depicts them as commonplace or noncontroversial.

Movies like Loving are still vital and important as good drama and in their reminder of the petty stupidity that still exists in the world. Anyone in an interracial relationship can’t watch a movie like Loving without feeling it in their bones. The idea that someone else could dictate who I choose to be with, who I choose to love, is unacceptable and cruel and just fucking stupid. The fact that people still have a negative opinion about “mixing” turns my hands into fists. 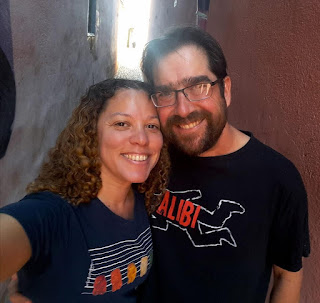 I don’t really have a thesis. This was more of a footnote. A small acknowledgment of a movie’s place in film history and in my life. A movie that portrayed something that needed to be portrayed and in a way that spoke to my heart. And for that, I Will Always Love You. 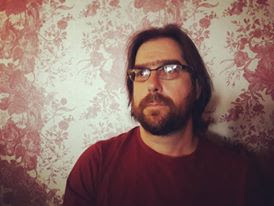 Johnny Shaw is the Anthony Award winning author of Big Maria, Floodgate and the Jimmy Veeder Fiascos. They fuck gently. He's handsome enough to have been mistaken for Jedidiah Ayres once or twice and gentlemanly enough not to brag about it. Those books, though. They'll make you say Whoop! Whoop! all night long. Keep up with him at his website and follow him on Twitter @BloodandTacos.
Posted by jedidiah ayres at 6:44 AM