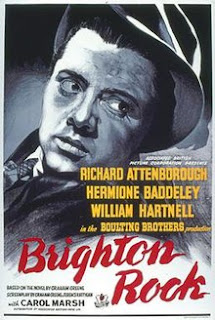 I love Graham Greene's writing for many reasons; its elegance, wit, human insight, compassion and brutality, but it is always his Catholic obsessions working themselves out through crime and espionage stories speak loudest to me. The films made from his books and scripts run the gamut of quality, but the best of them synthesize the spiritual conundrum at the heart of his characters' dilemmas into hard candy you can pop into your mouth easily and enjoy sucking on it for a long time afterward. Greene's novel and John Boulting's adaptation Brighton Rock are in fact named after just such a regional confectionery. 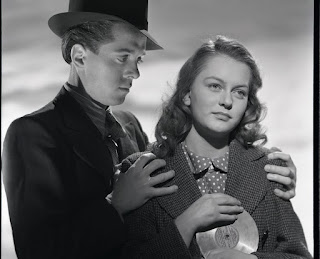 It's a crime thriller about a gang war and the intersection of good and evil in the story is a one-sided romance between Hermione Baddeley's sweet and naive waitress Ida who's witnessed something she doesn't realize the gravity of, and Richard Attenborough's psychotic young sadistic killer Pinkie who needs to know what she knows.

In a particularly cruel plan to find out what she knows and what the cops might be able to get out of Ida, Pinkie courts and marries her having correctly surmised her station in life (naive and innocent which he thinks means dopey, doomed sucker) and all the ways she can be taken advantage of and swept off her feet. 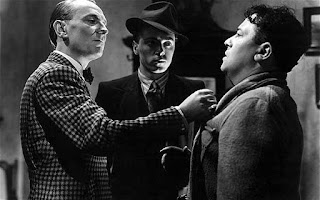 The narrative threads at play include an increasingly bloody gang war that Pinkie wages, a murder investigation targeting Pinkie with Ida as the unwitting witness, Ida's unlikely love story which the audience knows holds only pain for her in the end and Pinkie's toying with her, savoring the cruelty of it all as he plans his betrayal and her death. 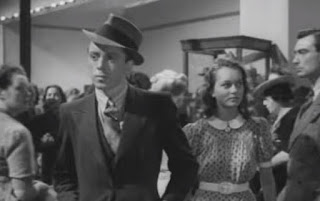 Pinkie is tough, very intelligent and Catholic enough to believe in damnation and hell, but rather than turning him to repentance it amplifies his psychosis as he sees himself as beyond the grace of God and happy enough to be there for the moment. Ida is sweet and sheltered and naive, but she's not dumb. Her faith is sincere, but untested. 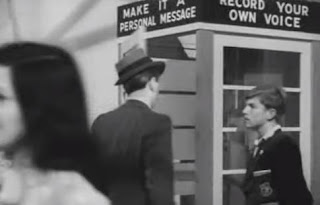 After they are married Ida sees a novelty attraction on the boardwalk where you can record messages and give them to friends. Ida asks Pinkie to make one for her and he complies. Inside the glass booth with Ida watching him speak, but unable to hear what he says, Pinkie records his message for Ida and because she asked him to, he speaks from his heart... 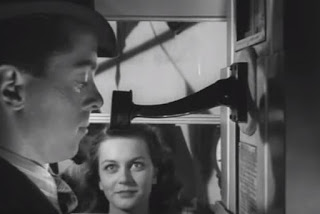 You asked me to make a record of my voice. Well here it is. What you want me to say is 'I love you.' Here's the truth: I hate you, you little slut. You make me sick.

We watch him relishing the pain it's going to cause her when she hears it, and we watch him watching her watch him speaking special private and true words only for her from the heart of her husband whom she loves. It hurts us. 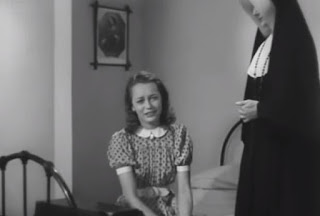 Later when Pinkie's plans to kill Ida have been thwarted and he has been killed, Ida still can't quite understand the truth about him. She cries confessing to a nun that she knows he's damned and she doesn't want to repent of her sins hoping that she can one day be with him again in hell. She still believes the rules of her faith, but she no longer finds any comfort in them.

The nun tries to comfort her, "You can't understand, nor I, nor anyone for that matter, the appalling strangeness of the mercy of God... You say he loved you. There's hope." 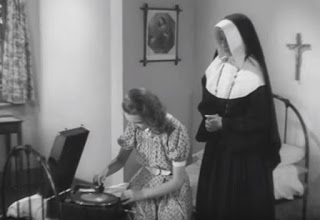 Ida reaches for the recording her husband gave her as proof of his love and we can hardly bear to watch as she listens to his special message to his wife from beyond the grave, the only comfort she may know for the rest of her life. But the record has been damaged and only part of the message is preserved and Ida hears her husband's confession - 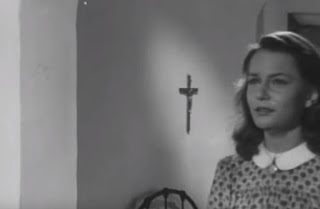 Does the audience believe the way she does about heaven and hell, sin and redemption? They don't have to, they believe that she does. They know that her husband didn't love her and in fact despised her and found her innocence contemptible. On one hand we want her to know the truth about him and on the other we're glad she's been spared his cruelty.

Some among the audience may foster some contempt for her and see the stubbornness of her faith dooming her to a life of not-knowing-things, but others will see the strength of her convictions being rewarded by the 'appalling strangeness of the mercy of God'.

Posted by jedidiah ayres at 7:28 AM