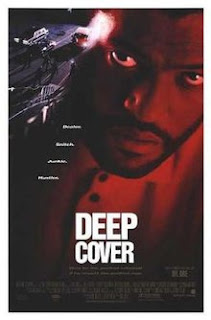 Released in the spring of 1992, Bill Duke's Deep Cover is the concluding chapter to what I consider the foundational 1990s cocaine crime flicks following Abel Ferrara's King of New York (fall 1990) and Mario Van Peebles' New Jack City (winter 1991). All three films are time capsules packed with style and swagger (and sometimes not much else), but Deep Cover is the most sober and complex in its focus on the hero's dilemma (perhaps worth noting too that while the others are set in NYC, Deep Cover is a Los Angeles story and that it is the institutionally-focused exception that falls in between the other seminal L.A. epidemic dramas - John Singleton's Boyz N the Hood and The Hughes Brothers' Menace II Society released summer 1991 and spring 1993 respectively; between the 5 films I think the template for 90s crack/cocaine crime fare was set).

Laurence Fishburne (billed as 'Larry Fishburne' in this one as well as in King of New York and Boyz N the Hood) stars as John Hull, an undercover narcotics agent for the DEA handled by Charles Martin Smith's agent Gerald Carver and tasked with bringing down a West Coast cocaine kingpin. 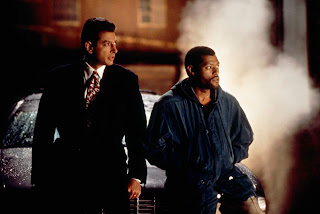 His success as an agent of justice and righteousness will rely on his cruelest reasoning, basest survival instincts and his willingness to stoop to humanity's lowest operating levels. By the end of the film he'll have done many things that trouble his conscience in the name of a supposedly greater good and be unsure of his place in the world, his moral compass pointing in confusing directions. 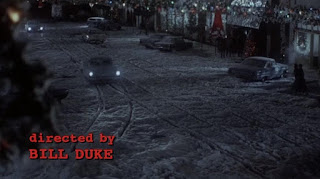 But our story begins at Christmas... 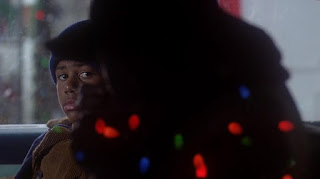 Before he ran the cocaine streets, our narrator John remembers being kid in Cleveland named Russell Stevens Jr. (Cory Curtis). The film opens at Christmas time 1972 as he is out shopping with his father, Russell Stevens Sr. (Glynn Turman) on an entirely different kind of snow-blanketed streets. In the warm car young Russell watches his dad snort white powder and Fishburne's voiceover narration tells us "my father was a junkie." Russell Sr. is disgusted by his own behavior and berates his son "Don't ever do this. Don't you ever be like me" while Silent Night plays on the soundtrack.

Russell Sr. asks his son what he wants for Christmas and when Jr. says he doesn't know, his father asks him, "How do you expect to get what you want if you don't even know what you want?" Russell Sr. poses the question while loading a gun and his son portends an ill fate.

Dad exits the car and enters a liquor store. 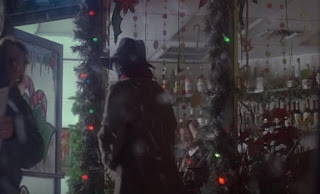 While Dad's inside Russell Jr. is startled by an intoxicated Santa Claus outside his window "Merry Goddamn Christmas" he snarls, "Have you been a good boy?" Russell Jr. is frightened by this menacing, intimidating incarnation of the mythical jolly fat man who loves children and keeps track of them, rewarding all the good ones with gifts. Russell Jr. looks for his father to protect him and finds him just in time to watch Russell Sr. shoot the liquor store proprietor and exit the store casually, seemingly unruffled by the cold blooded violence he's perpetrated to get what he wants. 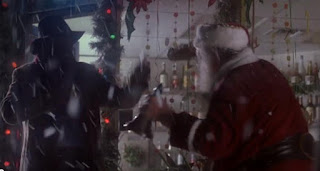 But Russell Sr. is considerably less cool when he notices Santa Claus talking to his son, "Don't you be teaching my boy that fairy tale shit" he says while squaring off to fight the against what he perceives to be the real threat to his impressionable young son. This is the enemy he fears - a white savior who doesn't respect the very morality he's selling, openly drunk and profane, but resolute and comfortable in his authority threatening Russell to keep the commandments "have you been a good boy?"
Santa scurries away. 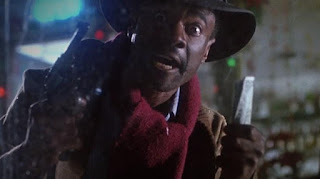 Momentarily victorious, Russell Sr. teaches his son a final important lesson. Clutching his gun in one hand and the money its earned him in the other, he says "Do you see?" before being shotgunned in the back by the wounded liquor store owner. 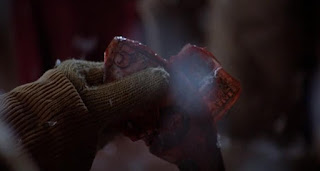 Russell Jr. jumps out of the car and kneels beside his dying father and takes from him a few bloody dollars, a memento he carries till the end of the film. 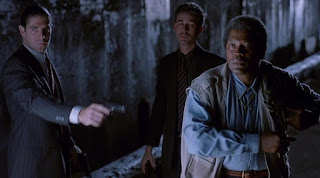 On his journey he is befriended by Jeff Goldblum's white drug dealer, getting rich easily on the poison he's happy enough to traffic, and he's beset and abused by Clarence Williams III's cop, a religious black man who considers himself a righteous crusader against crime and who calls John Judas, a traitor to his people, unaware of his undercover status (a casting dynamic Duke used again in his 1997 prohibition crime flick Hoodlum starring Fishburne as the black godfather of Harlem, Bumpy Johnson, and Williams as the black toady to the white power structure represented by Tim Roth's Dutch Schultz).

Though by the film's end we're not sure that his badge or even his intentions mattered. Clarence Williams' crusader will have failed and been undone and blinded to the truth by his righteous dogmatic passions while John has succeeded by following orders though they entail horrific behavior and don't end up getting him what he thought he wanted. We're happy to see him free himself from agent Carver's false legal morality (he has not been a good boy), and we're relieved to see him give up the paltry cash his father died for... 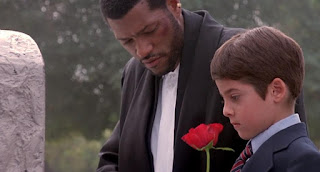 He takes another orphaned boy to visit the grave of his mother, a character John/Russell couldn't save, and he leaves his father's bloody money on the gravestone and walks away holding the boy's hand presumably to raise and instruct as his own son.

What will he teach him? 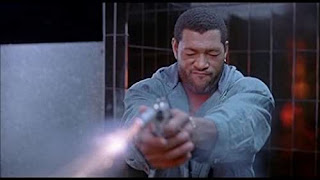 He may not have been a junkie, but he's dispatched dispassionate violence like his father and in the end he's still not sure what he wants and he's certainly not sure where to go from here, but he's roundly rejected the fairy tale shit pushed on him by many moral authorities...starting with Santa Claus.
Posted by jedidiah ayres at 10:43 AM