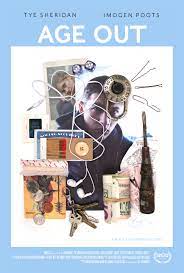 Age Out (w/d A.J. Edwards) is the story of two very different but deeply lonely people connecting over the holidays for a brief, beautiful moment only to have a horrendous revelation tear them apart. Richie (Tye Sheridan) has been emancipated from the foster care system and is finding it hard just to make the 225 dollar rent on his lousy room in Waco without any friends or family to lean on. Joan (Imogen Poots) has suffered a great loss and drinks heavily to cope in her ranch-style home when she’s not working at the bank.

Richie’s apartment gets broken into and he replaces the door himself, his landlady reimbursing him for the costs though not without chiding him first for going over-budget even though he doesn’t even have access to a car. He can’t help but notice which drawer she takes the cash from in her office. 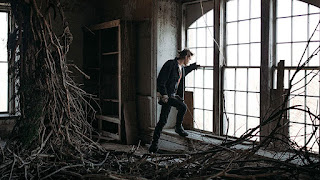 With next month’s rent hanging heavy over his head after being robbed, he calls a payday loan company to spot him three hundred bucks. When the woman on the line asks him for his banking information he says he doesn’t have an account and she says she can’t help him. Richie’s lack of resources comes heartbreakingly into focus when he then flat-out asks the payday loan lady what else he can do. She ever so helpfully suggests a pawn shop.

When Richie breaks into the landlady’s office after hours to steal money from her to later pay her, she shows up unexpectedly and he panics and kills her. Since we never even see any scenes of the landlady sweating him for past due rent before the murder, we are left wondering if he thought she could evict him immediately following missed rent. 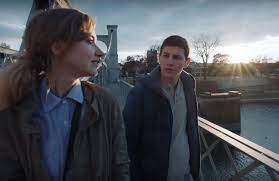 Speaking of needing parental guidance, Richie comes across Joan trying to figure out a stick shift on a car she’s inherited while he is waiting for the next bus to New Orleans. He offers to drive her home and she offers him some leftover funeral food. It is in Joan’s house that we see the first of two artificial Christmas trees in the movie, this a tasteful white one with low-key colored (and sparingly placed) bulbs, the type of tree you’d expect to see behind the Lennon Sisters on an LP sleeve at your grandma’s house. 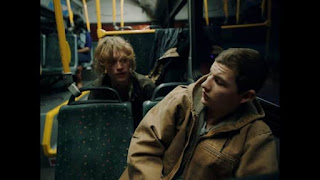 Richie misses his bus and ends up stuck in town and hanging out with essentially the Devil, a greasy crook named Swim played by the always great Caleb Landry Jones. Swim shows him a good time, takes him to all kinds of very cool looking squats to drink and party, but throws cold water on Richie after awhile by not-so-subtly hinting that he knows about the landlady.

Richie comes to Joan’s rescue again when he comes across her having accidentally locked her keys in her car. He breaks an arm off her sunglasses and picks the lock, giving himself some bad boy credentials in her eyes. They go for a walk and connect over their loneliness, then later go to a New Year’s Party together where Richie really sticks out amongst her middle class friends. She asks him to stay the night, if only on the couch in front of the Christmas tree, saying she hasn’t been sleeping well since her mom died. 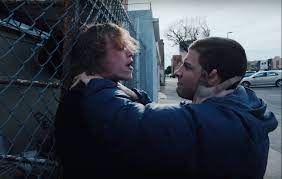 Swim rides up on Richie on his way to work the next day and says he needs him for some nefarious shit. Richie doesn’t want to do it but then Swim says, “All it takes is one little word, Richie, for me to knock things down.” Richie attacks Swim, who taunts Richie, telling him to go ahead and kill him as Richie has his hands on his throat. Richie thinks better of it and gets up, Swim asking for a hand up off the ground with a smirking, fey flourish. On the ride over, Swim tells Richie how it is:

“Everybody always tries to tie you down. Tell you what to do. I’ve got nothing to confess, you understand? No money- no real money, no jobs, no folks. But we’re alright, right? I do what I can. It’s all I’ve got…We’re born alone, we live alone, and we die alone. And that’s it. It’s nothing. And that’s freedom, Richie. People talk about having it all the time. What if it’s a really little room? Really dark with little cobwebs up in the corner?” 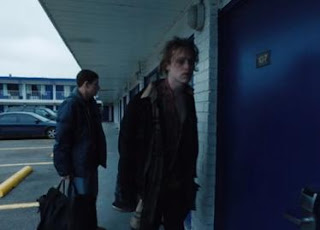 The two go to a sad sack extended stay motor lodge where Swim has obtained the master key. Swim sets a crappy car in the lot on fire and the two of them ransack all the unoccupied rooms they come across in the confusion. In one room they rummage through, Swim pointlessly knocks over a table-top size fake tree, underlining just how shitty their act is. Someone whose stay in such a place is so long that they put up a Christmas tree and still haven’t taken it down post-New Year’s doesn’t need more shit on their plate than they already have. Catching sight of himself in a window while catching his breath mid-spree, Richie abandons his meager spoils and evil friend and runs all the way to Joan’s house. Or, to bring it back to the Christmas of it all, he abandons the shabby tree that Swim’s way of life offers him for the Lawrence Welk tree of Joan’s nice house. 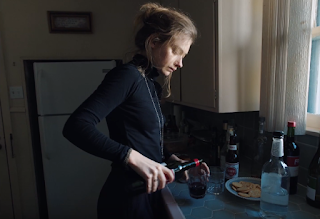 Joan is drunk and agrees to hit the road with him. As they leave Waco the for the wide open spaces of West Texas, the film switches from boxy wider-than-Academy-ratio to full-on letterboxed for the first time, like thick black bars on the top and bottom of your TV like we’re in nineties home video land. We get the full Malick-style treatment (director Edwards was an editor for Malick and Sheridan starred in Malick’s Waco-set The Tree of Life), beautiful magic hour shots of two pretty people in nature, all Badlands-ing it up. For a minute it looks like Richie has defied what Swim laid down, managed to find freedom with another person and without confinement.

Then the shoe drops hard as Joan lets loose that her mother isn’t just dead but actually murdered at her office where she manages apartments. The truth dawning on Richie at last is shattering, so much so that he leaves their motel before Joan has woken up and takes the bus back to Waco, the screen changing back into the rectangular box once again as Richie confesses to the crime and goes to jail. To hammer the boxed-in thing home even more, turns out being responsible and attached also can include a “really little room.” 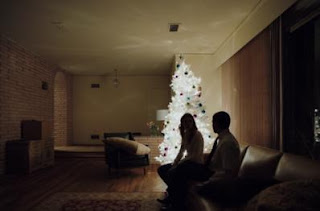 Age Out is obviously not a subtle character study or a badass crime film but it strives for a certain (mostly) sentiment-free, beautiful humanity and earns how affecting its final moments are. Sure, there’s only two Christmas trees here to count it as part of the CrimesMas Canon, but there are few crime movies that have such a hard-won earnestness, that are so defiantly un-noir in attitude (well, few that I genuinely like, anyway). You thankfully don’t hear any church bells or something sappy like that when Joan visits Richie in prison, but try telling your heart that. She hates what he’s done, but she’s there and she wants to talk. CrimesMas season could stand for a little grace, measured as it may be.

Pete Dragovich has written for Crimespree, Crime Factory and Spinetingler Magazines. He still has the Nerd of Noir blog but doesn't post shit up there anymore and a bunch of the links don't lead anywhere now so maybe just skip it. He's @nerdofnoir on twitter (which he kinda sucks at) and NERD_OF_NOIR on letterboxd (where his opinions are the correct ones). He lives in Minneapolis.
Posted by jedidiah ayres at 6:25 AM