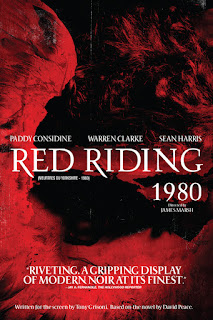 Occult dreams psychic themes war crimes to map out the demon spheres with webs and wires that bind the days together man in amongst the golems dwells and scars them with his thoughts lost and thoughts found such terror can his hammer do.

The Year of Our Lord Nineteen Eighty, a damp winter, not long until the celebration of His birth, our saviour. But this is Yorkshire—as old as Christendom and twice as bloody. Some men can’t be saved.

Ripper still at large, women of the North facing a sixth Christmas in fear of being out alone at night, relying on husband or son or brother to ferry them about. Needing to be seen to be doing something, the Home Office send their man, a commander from the Manchester force, to conduct a review of West Yorkshire’s flailing investigation.

Peter Hunter. Our tragic hero. “A good man, a steady man. Squeaky clean.” Assistant Chief Constable of Greater Manchester Police. Best man for the job. Saint Cunt, coming back over from the other side to fuck them again, six years after he conducted a review into an unsolved armed robbery at the Strafford Public House. Masked gunmen. Four dead, two coppers injured. Absolute bloody mayhem. But even Saint Cunt couldn’t make head nor tail of that one. 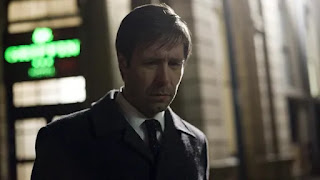 Hunter (Paddy Considine) isn’t as squeaky clean as his superiors believe. Along with his friend, Detective Chief Superintendent John Nolan (Tony Pitts), his other choice for the team is Detective Helen Marshall (Maxine Peake), who he has been carrying on with behind his wife’s back. His wife, Joan's miscarriage brought an end to his review of the Strafford Shootings, and her subsequent health is something the Yorkshire coppers use to needle him. Women are always the target. When their liaison from West Yorkshire, the corrupt and violent Detective Superintendent Bob Craven (Sean Harris), claps eyes on Marshall, he laughs out loud, and takes every opportunity to remind her this is a world built by men and for men.

This tone is established from the outset. Although shot in widescreen on pristine 35mm, the film opens with a montage of news footage and scenes from around Leeds, some archival and some fictional. The grainy 8mm and video sources roll beneath a track of soundbites concerning the Yorkshire Ripper, who at that point the police thought had murdered twelve women. A horrifying number that Leeds wasn’t going to allow them to forget for one second, as the chant went up from the terraces of Elland Road on matchday, “Ripper 12, Police 0,” and the score was kept on the city’s streets too.

Battle lines were drawn along gender lines, and further graffiti popped up across Leeds, added to and counter-corrected ad nauseum.

At the end of the montage, the head of the investigation, Assistant Chief Constable of West Yorkshire Police, “Badger” Bill Molloy (Warren Clarke), delivers an unnerving direct-to-camera message to the Ripper, his shocking words proof of just how much of the killer’s own murderous misogyny has been internalized by the police supposed to be catching him: “To me, you’re like a bad angel on a mistaken journey. And while I would never condone your methods, I can sympathize with your feelings.”

Even with Molloy forced into retirement, Hunter never stands a chance. Thwarted from the off by forces within West Yorkshire Police, he soon suspects that the investigation is not merely incompetent, but at least one murder not committed by the Ripper is being attributed to him in order to cover up graver, monstrous crimes involving serving officers and the great and good of society. Craven openly tells him that this is a Yorkshire crime that will be solved by Yorkshire police, laughing at Hunter’s theory that the Ripper isn’t some hunchbacked carnival freak, but a married man with the same troubles most people suffer through. 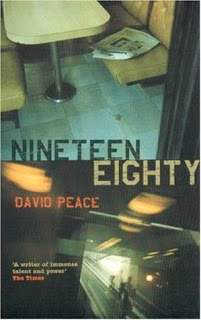 David Peace’s Red Riding Quartet is a complex occult history of seventies and eighties Yorkshire across four volumes of blank verse prose that’ll leave you word drunk and reeling—adapting it into any form for the screen seemed a big ask. To pick three of the books and turn them each into a hundred-minute movie for television seemed downright foolhardy. But screenwriter Tony Grisoni knew that his task was more one of disproportioning than adaptation; to be loyal in spirit rather than minute detail. Characters are conflated or altered or erased entirely. Threads are pulled from Peace’s labyrinthine weave of plots, but even more are discarded. Yet the final films are still grimly dense.

1980, the middle entry in the trilogy, picks up six years after the first, which culminated with the Strafford Shootings, the consequences of which reverberate through the other two films. Make no mistake—Red Riding is very much a holistic work, intended to be watched through in order with a sense of powerful dramatic accumulation. But I’m concentrating on 1980 as it is the one film set at Christmas, and that uses expectations of the holiday to contrast with its darker, more pagan concerns (Note—in Peace’s quartet, both Nineteen Seventy Four and Nineteen Eighty take place during Christmas, but the filmmakers chose to shift 1974 back to the autumn, possibly fearing Yuletide overload for films that premiered on network television in springtime). 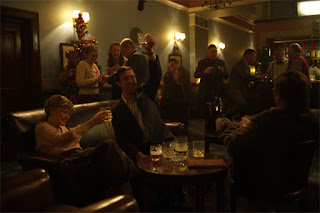 This is a murder mystery filtered through cosmic terror, stemming as much from British folk horror like The Wicker Man and Witchfinder General as it does crime fiction. A recurring character throughout the trilogy is Martin Laws (Peter Mullan), a man who claims to be some kind of private social worker (“I work with the sick, the lonely, dispossessed.”) and who possibly once wore his collar turned round. But if he ever had Christian faith, his allegiance now lies not with any established church, but a blacker religion whose deeds are of a distinctly mortal nature.

The film’s photography, especially in the Leeds sequences, apes classical film noir: high contrast chiaroscuro; all but a handful of scenes occurring at night; relentless rain. Leeds is a hellscape, the hunting ground of the Ripper and violent cops alike. The room Hunter is given to run his review from is in the bowels of the police station there, a windowless chamber near the interrogation rooms, the dog cages, the hidden spaces where people can be disappeared for days. The hotel Hunter and his team stay in is a looming Victorian pile, dark and Gothic. Yet, in contrast, home in Manchester is no heaven, but a purgatory. A limbo of desperate emptiness, a place haunted by his wife, childless after a series of miscarriages. He tracks the stench of hopelessness with him wherever he goes. 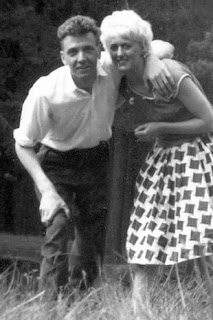 The striking exceptions are when Hunter makes the drive from one city to the other. Characters refer to “the other side” and “crossing over” whenever they make the trip. The space between them is moorland, covering foothills of the Pennines, a spine of hills and low mountains bisecting the North. The same moors where Ian Brady and Myra Hindley buried four of their five victims.

In the psychogeography of 1980’s Yorkshire, the moors are bathed in the vanilla light of early morning sun, where for just a few moments Hunter’s head can break above the surface. Where the evil that lurks either side cannot touch him. These are the only scenes that feature sunlit skies in the whole film.

Increasingly, hunter realises that not only is he not capable of solving these terrifying crimes, he cannot even understand the places from which they originate. He visits Fitzwilliam, a small mining village at the centre of much of the trilogy’s horror, sitting in the lee of a power station’s colling towers that stand over it like some giant ancient henge.

Braziers burn at the sides of deserted streets. A lone horse wanders freely. Hunter stays just long enough to be startled by a group of children springing from the long grass in grotesque masks, brandishing toy guns. It is as though he has mistakenly wandered into a foreign land, governed by rules and customs completely alien to him. This ambush both echoes the massacre at the Strafford years earlier, and foreshadows terrible events yet to come.

The pap of traditional Christmas is continually contrasted with the horrors of reality. Rushing to meet an informer in trouble, Hunter spies the man’s decorated Christmas tree through his front window. A picture-perfect image, but one Hunter remains separated from by the glass. Instead, he is lured by the light glowing from a partially opened garage door and all the horrors that lie behind it (suffice to say, this is a film that comfortably qualifies for Christa Faust’s Krampusnoir list of 10 Flicks Where the Kid Gets It).

For Hunter’s own Christmas Day, director James Marsh again abandons 35mm and presents the gathering with his wife’s extended family in 8mm, like a home movie, recognizing the bland celebration of paper hats and party poppers is conducted with artifice as if happening only to create expected and preconceived memories. Hunter receives a digital watch as a present, a big hit with his wife’s nephew. The old gives way to the new. Analogue estimation for split-second precision. But any happiness gives way to the maudlin realization that they are surrounded by what they have lost. By what they will never have. This is further underlined when they return home to find their house on fire. Merry fucking Christmas, lots of love from “Over There.”

As Hunter begins to uncover potential police involvement in historic crimes, he loses his grip on the investigation, and on his job. Nebulous allegations are made against him, resulting in his suspension and disciplinary hearings. By sheer luck, a sergeant of West Yorkshire police stumbles upon Peter Sutcliffe dumping a hammer and bloody knife, and as if by divine intervention the Yorkshire Ripper is caught by a Yorkshire policeman.

Under interrogation, Sutcliffe confesses to all but one of the murders they put to him. “They’re all in my brain, reminding me of the beast I am.” (Beast – Hunter – Red Riding…you can make your own connections there). He also reveals exactly what Hunter already knew—that he isn’t a monster, but is a married man. The police who’d been looking for him for years can’t believe it. The same police who themselves have tortured and raped and murdered, and also have wives.

Like Blake Morrison said in “The Ballad of the Yorkshire Ripper”:

“…Ripper’s not a psychopath

But every man in pants.

Given half a chance.”

No pretty bow is tied from the remaining loose ends, which by now hang from every frayed thread. No pretense is made at offering any exegesis or even any kind traditional conclusion, for Hunter’s story is just an interlude in a larger, darker picture. One last drive is taken across the moors, for a hearing at the police station in Leeds, with Hunter pulling over for a moment’s peace in the dawn-lit moors. The only respite we see him get.

He needn’t have bothered. His return to Leeds sees him led down into the bowels of the police station again, into the belly of the beast. And this time he is swallowed. This time there is nothing but peace awaiting him. 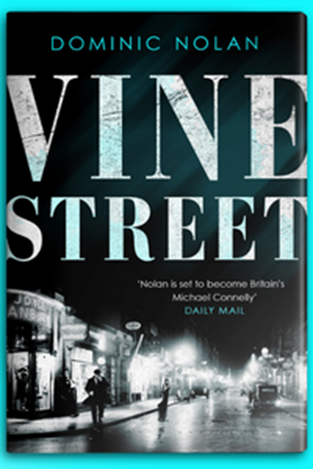 Dominic Nolan is from somewhere that passes for London. He has published three novels, the latest of which is Vine Street, but you can usually find him avoiding writing @NolanDom.
Posted by jedidiah ayres at 8:35 AM