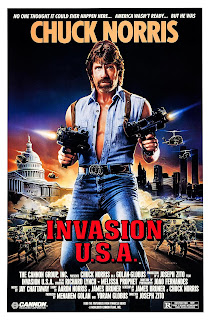 Chuck Norris has a vision of America. And it is fucked.

But before I explore Invasion USA in relation to Apparatus Theory, Marxism, and basic semiotics, I want to shut down the seemingly ongoing debate about whether or not Invasion USA is a Christmas movie. I have been on the internet. I know people have been arguing about this for years. A lot of people have opinions. However it has been scientifically proven that ninety percent of opinions are wrong. So I will lay down the facts that I made up. Invasion USA isn’t just a Christmas movie, it is Christmas. It embodies Christmas. Many people consider Invasion USA to be the Die Hard of 1980s action movies.

In Latvia on Christmas morning, fathers and sons watch Invasion USA just after they decorate their Christmas cabbages. In Suriname, the twelve stations of Matt Hunter are observed every Sunday of Advent and in celebration, everyone wears a ceremonial mustache and beard. I could go on. 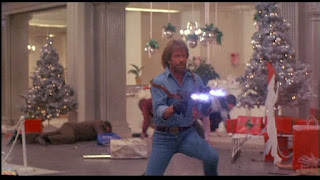 Invasion USA has all the classic elements of a Christmas movie. A guy with a beard. Christmas carols. A mall. Denim. A girl putting a star on the top of a Christmas tree right before her family is slaughtered with a bazooka. Billy Drago getting shot in the junk. The classic Christmas tropes.

But like many Christmas traditions, that doesn’t mean that they are welcome or wanted or enjoyed. It’s grandma’s fruitcake, but without the sweetness. It’s a bowl of steaming Brussels sprouts, but without the nutrition. It’s that nagging obligation of having to mail out cards, but without...no, there’s nothing good about that one. 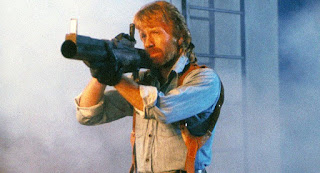 If you haven’t seen the movie, I’ll do my best to immerse you in the Invasion USA experience. Imagine if Ronald Reagan was talking in his sleep during a fever dream and one of the Secret Service agents outside the door overheard some of it and then told his cousin who owned a company that made camouflage pants and then that guy got really drunk and told the last few people at the bar--his only real friends--about Reagan’s dream, but couldn’t quite get the details right, so he filled in the gaps with barely-remembered snippets of a conversation he either heard or imagined between John Milius and William F. Buckley on late-night TV, and then one of those barflies--a veteran celebrating V.G. Day (Victory over Grenada)--who heard that slurred cacophony, later attended a John Birch Society meeting and told guest speaker Aaron Norris, Chuck Norris’s brother, who immediately got on the phone and shouted the story at his typist until she cried, and then the last thing she did before an unfortunate incident exploring self-trepanation as a treatment for the stress of working for Aaron Norris was hand-deliver the “story” to Chuck Norris who wrote the screenplay in eagle blood on the white stripes of an American flag. 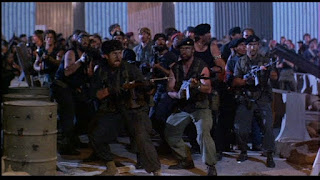 Invasion USA is a wake-up call to America. A Christmas card from your racist uncle. And the message is clear. America has gone soft and left itself open for attack. And when that attack happens, we will end up fighting not just the Commies, but amongst ourselves. (Imagine the ridiculousness of an outside threat attacking the United States and instead of banding together to defeat the enemy, Americans turn on each other, food shortages divide the public, and the government is unable to stop what seems like a relatively straightforward problem with a clear-cut solution. It’s ludicrous that would happen in our country.) 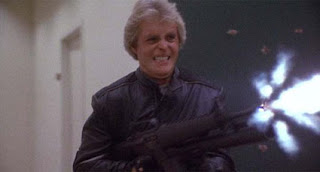 An evil Russian (played by America’s answer to Klaus Kinski, Richard Lynch) teams with a group of generic Cubans, extras in military surplus sale items, and an Asian (who in a surprise twist is not played by Al Leong) to invade the USA on Christmas Day. They attack everything that’s important to Americans: suburban homes, Christmas trees, rural homes, a mall, a church, couples making out, office cubicles, and dancing Cubans (to be fair, the last one threw me a little). 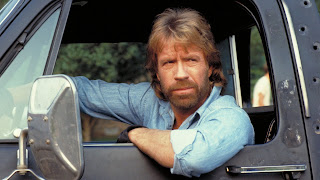 It takes Matt Hunter (Chuck Norris at his most characterless) a full hour before he makes a decision to join the story. When he does, his first stop is Miami. He drives down Everything That Is Wrong With America Street. There are prostitutes and their pimps. There are people staying warm in front of a flaming oil drum. There are black people. There is a busking saxophone player who picked a terrible location. And there are bikers. No motorcycles. Just bikers on foot. They all yell expletives in his direction. I’m assuming it’s because of the unseen provocative bumper stickers on his pickup truck. It’s almost like they don’t like America itself.

There’s a female reporter in the story who complains and takes pictures. Her character serves absolutely no function in the story. She’s not integral to the plot in any way. She’s not Norris’s love interest. She never actually writes a story or publishes her photos. I get the sense that Norris realized that the only other women in the movie were moms or prostitutes (who all end up dead), but he had recently read an article in Cosmopolitan while waiting at Supercuts where he learned that women can hold jobs that aren’t mothering and hookering. A last minute save. 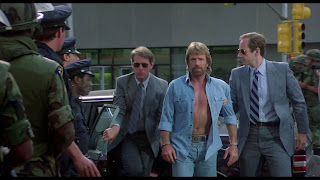 Even the total destruction of a mall is joyless. My only joy was the mental reminder to rewatch The Blues Brothers and Dawn of the Dead.

There is one good car chase with excellent stunt work if one good scene is all you need, but mostly it’s not that the movie is dumb--it is, but I like dumb. It’s that it’s dull. Which is why I disliked it so much when I saw it at the theater in my youth and the rewatch obviously didn’t change that view. How can you mess up this premise?

Invasion USA is a bad movie, but it’s also the movie I would make someone watch if I wanted them to understand what America can be like. Not what America thinks it’s like, but what America actually is like most of the time. A big, dumb, loud, violent jumblefuck of stupidity and exploitation driven by fear and anger.

Johnny Shaw is the author of seven novels, including Dove Season, Big Maria, and most recently The Southland.
Posted by jedidiah ayres at 4:37 AM

A+ article sir. It is a great movie but it is no Commando.