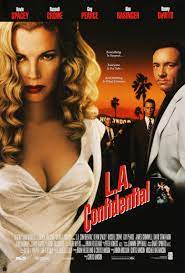 It’d been years since I last watched LA Confidential. In truth, I don’t really remember a lot about my first viewing. I am certain I was half-drunk, and I know I had not yet read any of Ellroy’s novels. What I do remember is this. I loved the score, and I was stunned when Dudley Smith went all Bang-Bang on Kevin Spacey’s Detective Jack Vincennes (sidenote: who else kind of forgot that Spacey used to underplay some of his roles?). 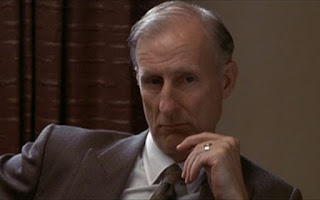 This time I was decidedly not drunk, and, having now read all of the LA Quartet a few times, also wasn’t surprised that Dudley Smith turns out to be the bastard we all know him to be (one more sidenote: I’ve given this a lot of thought, and I’m convinced Smith is the single most evil character in American Literature, even more so than McCarthy’s The Judge). But I was surprised, probably blinded by my fascination with the books, at how much Confidential is a Christmas movie. But not for the reasons you think.

It starts with a Christmas party - actually, it starts with a wife beater getting fucking clocked with Santa’s Sleigh, pulled from the rooftop by Russell Crowe’s Brooding yet cunning Barbarian of a cop, Bud White), but it’s really a Chrismas movie because Dudley Smith is the Devil… and Edmund Exley is Jesus.

To anyone who has read the Quartet in full, that part about Smith is undeniably true, and the part about Exley is, well, a little more complicated. But we’re talking about the movie here, and, with all knowledge of the source material thrown out, the parallels, inserted by Director Curtis Hanson and screenwriter Brian Helgeland, are undeniable.

Edmund Exley is a Boy Scout. Not just a boy scout, actually, a do-the-right-thing-no-matter-what dork of a boy scout. That’s established early, when Smith, after learning of Exley’s aspirations to the Detectives Bureau, questions him on whether or not he’d do The Right Thing and beat, kill, or plant evidence on people he knows are guilty. It’s basically Jesus and The Devil in the Desert while wearing police blues. That Exley soon finds himself promoted and under Smith’s tutelage is both a function of plot and theme. He needs to be too close to see the truth, while highlighting his own Personal Truth, his willingness and determination to ensure the right thing is done despite any discomfort it may cause. Exley is a martyr, and when he walks into the Nite Owl Cafe, he finds himself on his own road back to Jerusalem, though he doesn’t know the Devil is already at his shoulder. 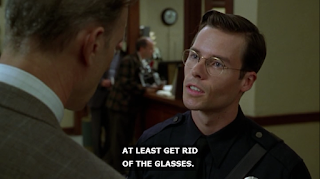 That Guy Pearce plays Exley with the calm, almost stuttering, tone of someone lost in the library only completes the picture. Hanson even draws attention to Exley’s need for glasses - a common malady for those born into imperfect bodies, one which Smith encourages him to discard - but later, at the Victory Hotel (Exley’s Golgotha), the glasses are shattered, impossible to see through, and he still takes motherfuckers out without an issue.

Throughout the film, he even gathers Disciples. Believers in, if not his way of doing things, than his ultimate message: that no stone can be kept unturned, that Evil, no matter it’s address or how cushy it dresses, must be vanquished. First Vincennes, then White, and, after that ending, more, surely, to follow. 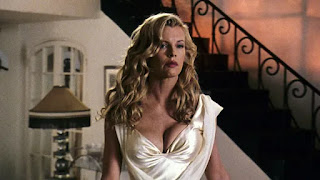 It’d all be on the nose and obvious except for the fact that Exley does lose to temptation when he falls in to the arms of Lyn Bracken (Basinger), and while that does diminish Exley’s christlike stature, Bracken, her of the Veronica Lake face and burning heart, joins him and Bud at the end of the film. suddenly lit in something other than postwar housing gloom, she appears Beatific. A Magdalene, almost. Another disciple herself.

Around them, the city (of angels!!! cmon!) celebrates Exley for vanquishing the corruption from within, and the film ends on a hopeful note. Exley is now the “face of the new LA Police Force” and, the chief reassures the media, no longer will “Fat officers steal apples from children” (Come on!). Exley has found his truth, and it has allowed him an ascension, complete with wounds that may as well be stigmata. Bud White, wrath turned to camaraderie and peacefulness, rides off into the sunset with Bracken, and Exley watches them go, the glow of a new day all about them.

When it comes down to it, I prefer the books. The continuation of the story, the battle between Smith and Exley. Both, it turns out, have clay feet, and Exley is ultimately unable to bring down Smith without compromising himself and his morals. There is no savior narrative, no absolution. There’s just a decent man, trying to be better in a city that celebrates, was made by, evil. That’s not to say there’s not a lot to love about LA Confidential, though. It’s hopeful and iconic and great cinema, but also, just a few years after Rodney King and the riots, just a few years after OJ and Furman, just a few years after Daryl Fucking Gates, it’s either offensively chipper and ignorant, or deeply cynical. The savior, we know, didn’t actually change shit. The bad times kept on rolling, even when The Devil was dead. 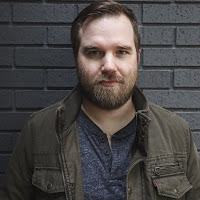