Violence lies at the heart of crime fiction. The draw of the genre comes in part from the way it externalizes the conflicts inside all of us, give our problems a face, a pulse, a neck you can reach out and squeeze. Rare is the crime movie without a hint of violence. Sometimes it is done through implication. Sometimes a few squibs (practical, please, CGI squibs are a sin) here and there will be enough. And sometimes a crime film’s violence will crest over the lip of the bucket and spill great gouts of blood all over the place. Splatter noir. These are films that borrow special effects from the goriest of slasher films, sometimes becoming horror films themselves. For my definition of splatter noir, I’m leaving out serial killer films, but I thought long and hard about the excellent I Saw the Devil before making that call. 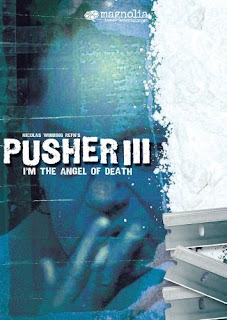 I’ve pushed the Pusher trilogy here before, but no list of splatter noir would be complete without I’m the Angel of Death. Zlatko Buric’s Milo, a minor character in the first two movies (and the English-language remake), takes the lead in this movie, as the aging middleman finds himself losing ground to younger dealers and new drugs. The film is a low-key character study for most of the film, until the last act, which is graphic in a way little experienced outside of The Act of Seeing With One’s Own Eyes. That Refn presents that final act in almost documentary style is the perfect cap to his plain-eyed portrayal of the nastiness of the Dutch underworld. 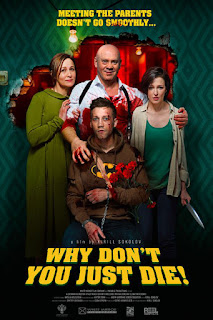 Taking place almost entirely in one room over the course of one increasingly gore-spattered day, Why Don’t You Just Die! is a twisty and surprisingly funny story about a young man who goes to visit his girlfriend’s parents with a hammer tucked behind his back. The twists and violence pile up quickly, and the walls gets painted red one incredible set piece at a time. The violence is both graphic and cartoonish, like if after Wile E Coyote got a boulder dropped on him, you saw his guts on the desert floor. 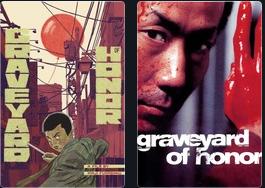 There is noir that is a moral exploration of an amoral world, and then there is noir that blankly presents a nihilistic view of life. Both these movies are shining examples of the latter. In stark contrast to most gangster films, which draw in audiences by exploiting both the appeal and repulsiveness of their subjects, Graveyard of Honor shows the world of the Yakuza as glamourless and empty from the jump. Bad sex, bad drugs, sloppy violence and inevitable failure are the only rewards for the criminal life in this movie, and the protagonist is presented as the only type of person who would be attracted to such a life, a total sociopath.

There’s a perfectly valid (and very long) splatter noir list you could make using only films by Takashi Miike (as is currently being explored on the Agitator podcast). His remake of Graveyard of Honor stays truly to the utterly nihilistic portrayal of an empty soul set loose in the Yakuza wars, while upping the blood and nastiness. 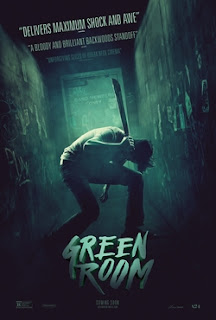 As Predator is Friday the 13th with special forces soldiers instead of campers, Green Room is a zombie movie with Nazi shitheads standing in for the walking dead. The plot is an admirably simple engine of thrills: A plucky punk rock band accidentally ends up playing a white power club – they witness a horrific crime – they find themselves trapped in the titular green room as swarms of skinheads try to figure out how to smoke them out and chop them up. Punctuated with bursts of Saulnier’s trademark clinical violence, the movie uses gore not just to shock but to raise the stakes of what is already and incredibly high-tension film. 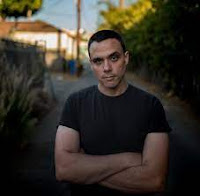 Jordan Harper is a TV writer and the Edgar-winning author of She Rides Shotgun. New books coming "soon": The Last King of California (UK - 2022),  Everybody Knows (US - 2023) His newsletter Welcome to the Hammer Party can be found here.
Posted by jedidiah ayres at 10:36 AM