Korea's Best Export from 2021 is a Bloodsoaked, Action-Packed Revenge Story

My Name is a Korean limited series with eight episodes that run between 43 minutes and an hour in length. I watched it with the subtitles, although I believe you can opt for a dubbed version on Netflix.

Don’t let the one inch tall barrier of subtitles deter you from sinking your teeth into this gem. Han So-hee is the lead actress. Known for her performances in romance films (The World of the Married, Nevertheless), Han So-hee underwent extensive training to prepare for My Name. “I wasn’t that familiar with physical training, so I knew that the results would pay off only when I practiced hard, and really devoted my time,” Han revealed. In the same article, Han goes on to talk about how “really devoted” the cast was to the production, working extra hard to ensure they got the sequences right.

And it shows. I’ll be the first to admit that my husband’s the film authority around this house, but I’ve picked up a lot from watching movies and TV shows from him, and it was evidence to me they shot a lot of complex action sequences in one shot. There’s a scene when Ahn Bo-Hyun’s (Descendants of the Sun) Pil-do Jeon hops up on a vehicle that made me feel my age. The fluid, effortless movements are just one of the things to appreciate.

The story is intense and complex. Han stars as Oh Hyejin. Her life falls apart when her father’s exposed as a gangster on the run from the authorities. When he’s gunned down outside her apartment door, Hyejin is determined to get revenge.

The trouble is, she doesn’t know who was responsible.

The gangster her father worked for lets her train to become part of his organization, and then creates a false identity for her (Oh Hyejin isn’t her real name) and sends her into the police department so she can work undercover and report to him. It’s the inverse story of undercover work, and in this case, Hyejin believes her father was killed by a cop. Her motive is to find his killer, but the revelations throughout the story ultimately shatter her trust as she kicks and stabs her way closer to the truth.

The relationship between Oh Hyejin and Pil-do Jeon is another exceptional component of this story. Dislike and distrust turn to a truce and eventually, a meaningful connection between two cops who’ve both suffered losses and coped with their grief in very different ways.

Since I’ve written crime fiction, it’s hard for me to watch any show without speculating about suspects and potential plot developments. My Name builds so much tension and provides just enough for viewers to toy with multiple suspects along the way to the truth. To me, the fact that I could see reasons to distrust so many characters increased my respect for what Ba-da Kim (Life Risking Romance) did with the scripts. The storytelling’s superb, the acting features a deep bench, with everyone delivering their best, and the tension builds to the conclusion.

Could be my show of the year. There are some exceptional contenders for 2021, but this show is the whole package, and even days after finishing it, I find myself thinking about the performances. There’s no doubt in my mind there’s a rewatch in my future, and I look forward to revisiting these characters.

I also appreciated seeing a revenge story through a female lens.

If you like gritty, hardboiled stories with plenty of action, do yourself a favor and head to Netflix now. I could express my love for Korean cinema tirelessly for days and admit I’m a huge fan of many translated works, but this is among the very best of the best to reach American audiences. 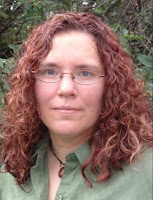 Sandra Ruttan's currently partnering with Laurel Hightower to release The Dead Inside, an identity horror anthology, in early 2021. Stay tuned for more projects and publication opportunities via Dark Dispatch.
Posted by jedidiah ayres at 5:56 AM