If you like your Noirvember to be a time of tight, twisty plots and snappy dialogue with maybe some shadows and trenchcoats thrown in, then this ain't your list, dear reader. This little marathon (you can knock it out in a night- I believe in you!) is all about grooving out, about being down with the vibe and going wherever each fucked up film wants to take you. It is my French Excess Film Noir Festival, a series of noir-ish films from, you know, France (okay so Corpses is Belgian but they strictly speak French in it- don't "well, actually" me) that are all recent, gnarly, stylish, and in their own distinctive ways completely fucking over-the-top. 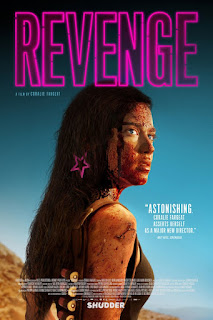 Fargeat's rape-revenge thriller starts with a gorgeous young woman going on vacation deep in the desert with her married rich dick boyfriend at his glass palace of a getaway. When two of his scummy buddies show up to go hunting, the rape part of the story happens. After she's killed by the boyfriend she then, um, self-resurrects herself (you read that right) and you have the glorious revenge shit. Everything in this film is at eleven: the relentless soundtrack, the sun-scorched and sweat-drenched cinematography, and the onscreen nudity and violence. If once you get to the dizzying climactic showdown, which features the very wounded and very naked rich dick running around his house getting all the blood on all the surfaces, and you're somehow not fucking totally blissing out from gnarly-overload? Well, then, I dunno. We have differing tastes in movies, I guess. It happens. 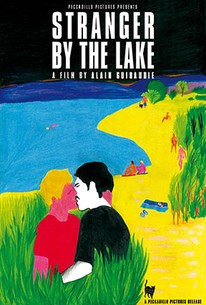 Stranger by the Lake (2013) written and directed by Alain Guiraudie

If you want far less blood and way more dude-wiener than in Revenge, might I offer you a seat next to a certain Stranger by the Lake? The film's about a guy who witnesses a murder at a gay cruising beach, but instead of going to the police our hero opts to keep coming back to the beach to have sex with the murderer. A lot. With its graphic gay sex, lack of a score, distancing shooting style, and dare-you-to-hit-fast-forward slow pace, Stranger by the Lake is a real fuck-you to most viewers and, well, that only makes me want to rewatch it more. If you can get on this film's very particular wave-length, you too will be tantalized and tortured by its many mysteries and shocked by its bewildering finale. And if you happen to be as entranced by it as myself, might I also recommend Guiraudie's less-heralded but even crazier Staying Vertical, which features a graphic anal sex/euthanasia scene. 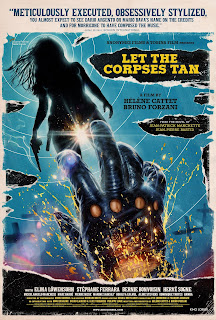 Let the Corpses Tan (2017) directed by Helene Cattet and Bruno Forzani, written by Cattet, Forzani and Jean-Pierre Bastid, from a novel by Jean-Patrick Manchette

Much as I dig Guiraudie's work, I would much rather be buttfucked to death by a Cattet/Forzani movie (they call me the king of transitions). The giallo obsessives/leather fetishists behind the similarly excellent movies Amer and The Strange Colour of Your Body's Tears bring their bugfuck talents to their adaptation of a novel by noir legend Jean-Patrick Manchette. This nearly dialogue-free gold brick of madness is about a heist crew laying low after violently stealing a bunch of gold who then get their world blown apart when two motorcycle cops track down their hideout. This thing is basically a ninety minute shootout with every single bullet accounted for, thanks to the film doubling back over and over again to see the same moment from different characters' perspectives. It's breathless, overwhelmingly pervy genius stuff, with the only moments you're able to slow down your overworked brain being a certain character's fantasies of a beautiful woman being covered in gold paint and pissing what looks like molten gold into the dirt. 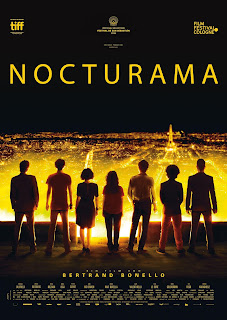 Whether Corpses knocked your dick in the dirt or pissed you off (transitional peerlessness is as much curse as it is gift), maybe Bonello's Nocturama is more your (s)peed (okay, okay, I'll stop). We follow a bunch of kids as they commit a series of terror attacks on Paris then cool out in a department store after hours. As with Corpses, we get lots of doubling back to different viewpoints to see another side of certain events but the style is more fluid and dread-filled instead of frenetic and intense. After the initial rush of racing along with them as they blow shit up and shoot folks, we wait for the hammer to fall as they hang out and reveal their youth and innocence in their weird consumerist playground/Eden. Then the hyper-melodrama of the ending is such a feat of filmmaking that I'm not sure if I am getting chills from the sad fates of certain characters or just the jaw-dropping directorial brilliance on display. Thankfully, the movie is so fucking rad I know I'll happily give it another spin to try and figure out my feelings all over again in a year or two. Here's hoping at least one of these fucked-up French groove-outs I've presented makes your rewatch rotation as well, dear reader.

Pete Dragovich has written for Crimespree, Crime Factory and Spinetingler Magazines. He still has the Nerd of Noir blog but doesn't post shit up there anymore and a bunch of the links don't lead anywhere now so maybe just skip it. He's @nerdofnoir on twitter (which he kinda sucks at) and NERD_OF_NOIR on letterboxd (where his opinions are the correct ones). He lives in Minneapolis.
Posted by jedidiah ayres at 5:45 AM