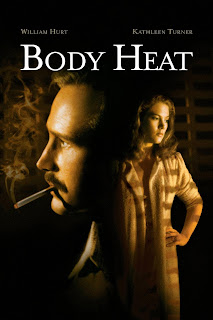 Matty Walker (Kathleen Turner) has always wanted to be rich. And the most effective way to achieve this goal is to get rid of her wealthy husband. But a young woman can’t be expected to do everything. She meets sleazy but sympathetic lawyer Ned Racine (William Hurt) during a steamy Florida summer and convinces him that murdering her husband is really the most sensible of all the options.

It’s a high-tension movie with excellent pacing, and costars Ted Danson as Ned’s delightfully goofy and loyal bestie Peter Lowenstein. Peter is a wonderful friend who withholds judgement while trying in vain to get Ned to wise up. JA Preston is Ned’s police detective friend who also watches as Ned spirals toward certain doom. Mickey Rourke is small-time criminal Teddy Lewis, and Kim Zimmer is Mary Ann, Matty’s look-alike close friend. Though there are no love scenes with Matty and Mary Ann, their chemistry does a lot of heavy lifting in the scene that introduces Mary Ann.

There’s no shortage of skin, cigarettes, and sweat in Body Heat, and it’s a fantastic reminder of just how much Ms. Kathleen Turner could freaking bring it. 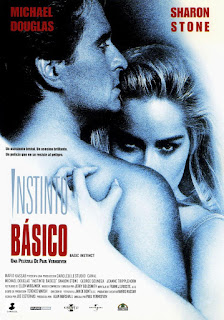 Basic Instinct is Body Heat turned up to 11. We have the fucked-up male protagonist (Michael Douglas as homicide detective Nick Curran) who really, really hopes his new paramour isn’t a cold-blooded killer. We have a sultry love interest whose very presence puts all the males in her orbit on edge (Sharon Stone as Catherine Tramell). And a twisty plot that brings the story to a natural if not completely satisfying conclusion.

But the love triangle in Basic Instinct has a different slant. Instead of the new couple plotting to get rid of a wealthy husband, it’s Catherine’s lover Roxy (Leilani Sarelle) who has the homicidal feelings. She’d rather see Nick dead than in her girlfriend’s bed, and she isn’t in the mood to play nice.

Jeanne Tripplehorn is somewhat difficult to watch as Nick’s ex-girlfriend Beth. She’s a police psychologist who is too eager to help Nick get back on track after an accidental shooting, perhaps because she’s infatuated with him to the point of accepting what can only be interpreted as rape from the viewer’s perspective as merely rough sex. Though Tripplehorn was 29 when Basic Instinct was released, she comes off as much younger. Maybe because she’s playing against a 48-year-old Michael Douglas, or maybe because she simply looked younger than her age. But her puppy dog eyes and pouty lips make her love-struck character come off like a teenager yearning for her history teacher.

Problems aside, Basic Instinct is an engaging movie. It’s a very sexy thriller that thrives with Stone as its lead. Her character is nuanced and dangerous, and she overtakes every scene with her commanding presence. Even though she breaks up ice on a countertop in one scene and no one cleans it up. She and Douglas have a full conversation while the ice is left to melt all over the damn place. 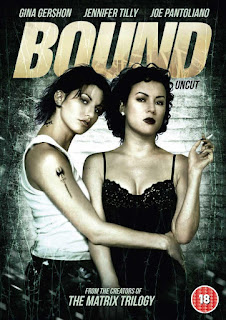 A few years before the The Matrix, the Wachowski sisters made Bound. I’m not the first person to mention this movie on the Noirvember list. But Bound deserves to be mentioned twice, dammit!

Violet (Jennifer Tilly with no-nonsense hotness) lives with Caesar (motherfuckin’ Joey Pants). Corky (Gina Gershon with fantastic 90’s style- shag haircut, baggy pants, tight shirts) is hired to work on apartment next door. Violet and Corky spot each other in an elevator and eye bang behind Caesar’s back. And then for-real bang not long after.

Christopher Meloni (with hair!) plays Caesar’s coworker and rival Johnny. They’re mobsters, by the way. So naturally Violet and Corky come up with a plan to steal $2 million from the mob and live happily ever after. Unfortunately, things don’t quite go as planned and the women must adapt and redirect, or they will die horrible deaths.

Bound is a sexy, tense neo-noir crime thriller that will make you nostalgic for 90’s fashion. 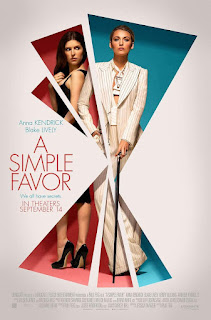 Based on the novel by Darcey Bell and directed by Paul Fieg, A Simple Favor is a delightfully dark comedy thriller. The main characters meet at their kids’ elementary school, which appeals to the part of me that only met people at my kids’ school for several years.

Stephanie (Anna Kendrick) is a widowed single mother vlogger who befriends Emily (Blake Lively), a fancy PR director who is always dressed to the nines. Emily is married to Sean (Henry Golding), a gorgeous English professor who isn’t as successful as Emily would like.

Aparna Nancherla and Andrew Rannells are parents at the school and pop in to offer sideline commentary of the two women in a way that will remind you of your best friends, unless your friends suck.

Though Emily is out of Stephanie’s league, the two quickly share confessions over martinis, and there is a little making out. Stephanie views them as instant besties, even though she’s maybe a little afraid of Emily because she’s freaking intimidating.

Emily disappears and Stephanie uses all her power as a vlogger to help track her down. When Emily’s body is found, Stephanie grieves naked with Sean. But then maybe it’s not actually Emily’s body. Stephanie sinks her teeth into the mystery, uncovering a multitude of crimes including identify theft and insurance fraud. It’s a twisted suburban tale with fabulous clothes and a few laughs to balance out the murder and deception. 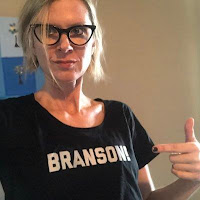 Penni Jones is an Arkansas native who currently resides in Michigan and spends all winter complaining. She is the author of On the Bricks, Kricket, and Suicide Souls.
Posted by jedidiah ayres at 5:54 AM