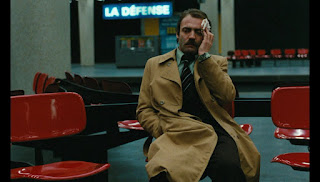 I am grateful to be asked to contribute to this list, though I am admittedly little more than a dilettante in this genre. I’m sure many of the following pieces are recognizable to many, but they were the first that came to mind, so probably are pretty rock-solid for someone peering around the corner of the dark alley of Noir for the first time. I am learning more about the genre, through the works and recommendations of friends, and listening to them and reading them has been the most surprising gift of late. Many of their recs are included. Listen to them. This is a beginner’s guide from a beginner. 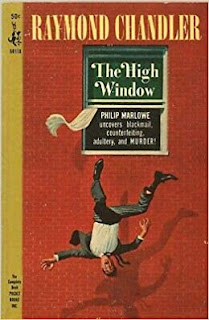 The High Window - Raymond Chandler — Chandler is the king, and if you go to Pasadena today you can still feel like you are living in the moments that Marlowe enters the home of the Widow Murdock—maybe just different cars outside. Nightclubs, corruption, coins, coupes and smoking—following Marlowe is a delight. Chandler’s third Marlowe novel. 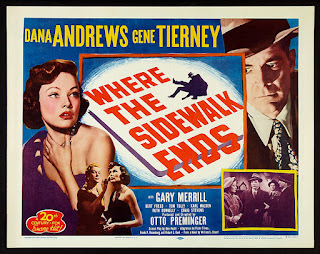 Where the Sidewalk Ends - Otto Preminger — Dana Andrews self-hating demoted cop is violent and scarred and watching him traverse a lurid urban underworld is disturbing and believable. Gene Tierney slays, and Otto Preminger knew how to ride the edge in all his work. Gambling, smoking and a Ben Hecht script. Don’t say no to this one. 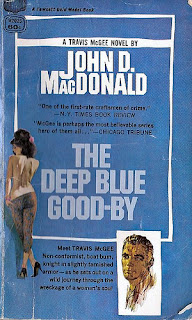 The Deep Blue Good-By - John D. MacDonald — Our introduction to Travis McGhee and his house-boat based “salvage” business.” Wander around Florida with him and learn more and more as he ages through the subsequent novels. 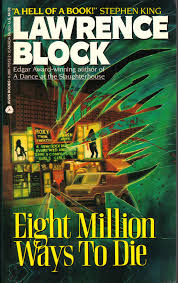 Eight Million Ways to Die - Lawrence Block — We meet Matthew Scudder, Block’s burned-out former Detective, in 1976’s The Sins of the Fathers, shortly after he leaves the NYPD. He is a committed alcoholic living in an SRO men’s hotel in Manhattan after leaving his family and essentially checking out of society, other than to pop up in languid strolls through the city, poking around for answers on criminal assignments he has taken on for “gifts,” as he is unlicensed. This is maybe my favorite series. You live with Scudder, experience his alcoholic despair (which I can say from experience is authentic) as he tithes at random churches hoping for redemption always out of reach and half-heartedly attempted. This novel, the fifth, ends with a surprise—Scudder at an AA meeting. A surprising and honest end to Block’s journey for the character.  Or so he thought. Because Block wrote another 17 Scudder novels after—where his imperfect recovery from alcoholism is a main, and similarly authentic theme. A Ticket to the Boneyard, A Walk Among the Tombstones, and A Dance at the Slaughterhouse are some of my favorites—all dark and filled with moral ambiguity and surprising choices. Scudder grows and changes along with the city around him, as each novel is placed in the time of its writing. I have read them all a few times. I treat them as AA meetings. 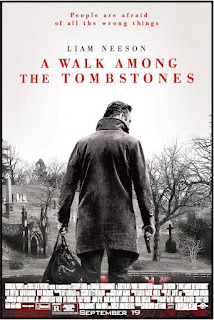 A Walk Among the Tombstones - Scott Frank — Based on the Block novel mentioned above, Scott Frank wrote and directed this adaptation starring Liam Neeson as Matthew Scudder. This film is one of my favorites, with an incredible score by Carlos Rafael Rivera—one of the most haunting and enchanting I’ve heard. The film is faithful enough to the novel set in 1999, and infinitely rewatchable. Neeson nails the underplayed coldness of the Alcoholic with some work yet to do in his program, with a most terrifying David Harbour performance against him, and a heart-breaking, relapsing Peter Kristo, played by Boyd Holbrook, trotting along behind him. The film is brutal and haunting, and marked by a lack of women and the theft and abuse of them, as we see them in flashback as they are remembered in moments—both by those who loved them and those who destroyed them. Mihai Malaimare Jr. photographs the city and story with precision and mess, and each frame is like a haunted painting from Peter Kristo’s forgotten studio. I know this film is not everyone’s favorite, but man I will watch it every time it’s on. The performances are surprising, the story is dark, and the world is unkind—oh baby, what a movie. 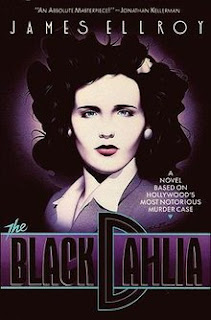 The Black Dahlia - James Ellroy— Ellroy has a brutal and enveloping style that is hard to miss in later writers in the genre. He is the daddy. And while some of his later novels are my favorites (L.A. Confidential, White Jazz, American Tabloid), The Black Dahlia is the first in the LA Quartet of the ‘40s. And you’re not going to just read one Ellroy, so you may as well start at the beginning. This novel was my first foray into his work, and the most lasting impression the book gave me was the page-turning fever of hopeless obsession. Based on the Elizabeth Short murder, this is Ellroy’s historical descent into Los Angeles during the post-war boom that made the city so dangerous and alluring. Because his novels move along historical lines, I would start here and just traverse Ellroy’s hard-hitting history through the terrible episodes of the ‘60s that begins with American Tabloid. He is a master at work, if the period dialogue and character point-of is painful to swallow, it seems like racism has found a way to stay endlessly contemporary. Can’t recommend enough. 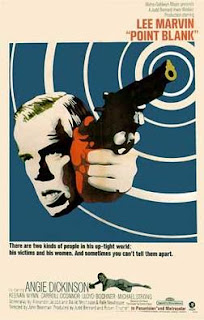 Point Blank - John Boorman— Lee Marvin is Walker, and just wants his share of the score. Walker is betrayed and robbed by his partner who leaves him for dead—and so we follow a grim and grizzled Marvin as he bashes through the corporate hierarchy of The Organization to reclaim his share. Marvin helped get this movie made, and in the hands of Boorman, we see a post-modern noir in all its splendor. Angie Dickinson is always a reason to watch a movie outside of everything.

Recent watches I enjoyed on Criterion: 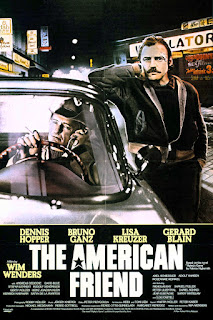 The American Friend - Wim Wenders—This is a Tom Ripley journey with Wim Wenders at the wheel. Full of surprising angles and colors and some spectacular sweaters—the action revolves around a plot that Dennis Hopper’s Ripley hatches to keep a counterfeit art operation going. Which is one of my favorite parts about it—high stakes and moral questions surround….fake art and greed. Greed is always a theme in noir, but it’s somehow sadder in this one as we see it pull apart the innocent life of integrity built by Bruno Ganz’s Jonathan Zimmerman and his family. Bruno Ganz is this whole movie. Watching him is a masterclass in acting, sure, but humanity as well. 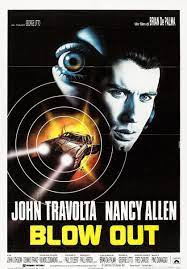 Blow Out - Brian De Palma— I saw this film recently on Criterion and couldn’t believe how much I enjoyed it. De Palma spins the story around John Travolta’s Jack Terry, a sound engineer and effects recordist for movies, as he tries to grab some extra effects one night at a park. He is able to record the sounds of what may be a car’s blown tire or a presidential candidate’s assassination, and figuring that out bumps him into Sally Bedina, played by Nancy Allen. De Palma uses bold framing to emphasize what we are seeing and hearing and puts us in the urban underbelly of the Philadelphia and New York train stations, flophouse, phone booths and cheap movie studios that bely the unimportance of its characters and the importance of their mission. Travolta and Allen are fantastic, and the paranoia of a sound expert “maybe just hearing things” playing against the real danger following them both is exciting and memorable. A great ending. Watched it with my wife, and she really liked it, which was a pleasant surprise. That we are still married. 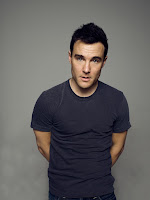 Rob Belushi is an actor, host and writer based in Los Angeles, but born in Chicago.
Posted by jedidiah ayres at 6:22 AM