Man Out of Prison: By the Time We Leave Here, We'll Be Friends 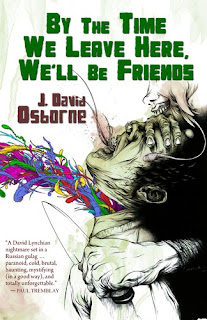 Counting down to the Netflix release of Evan Katz's adaptation of Dave Zeltserman's Small Crimes I'm looking at some of my favorite in the man-out-of-prison subgenre. Today it's J. David Osborne's By the Time We Leave Here, We'll Be Friends.

Another breakout, another group of hardened criminals who depend upon, but do not trust, each other. The twists this time? Mysticism and cannibalism.

Set in a Siberian gulag in 1953 this slim book packs a lot of atmosphere and worthy cringing into its economic word count about desperate people plotting their escape. Yeah, I know, this is man out of prison month, WTF with the people in prison this time?

Because the prison they inhabit is a terrible and increasingly dangerous place for them to be (hence the need to escape), but it's kind of a cake-walk compared to the tundra they'll cross to freedom, and while the majority of the pages are pre-escape, the sheer awfulness of the task of recruiting an unsuspecting prisoner to join the escape and then serve as cannibalized sustenance for the rest of the team sits like a spiritual pall over the entire thing.

The escape seems like a foregone conclusion. The cost of survival is another question.
Posted by jedidiah ayres at 1:57 PM