Man Out of Prison: Joe Clifford 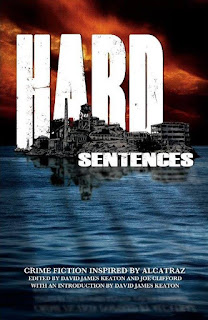 Counting down to the Netflix release of Evan Katz's adaptation of Dave Zeltserman's Small Crimes I'm looking at some of my favorite in the man-out-of-prison subgenre. Today I've asked Joe Clifford, co-editor of the upcoming man in prison fiction anthology Hard Sentences to talk about a favorite...

I’ve always been a sucker for the “man just released from the big house” storyline. And having been given about ten (nine) minutes to write this by my brother from another/doppelgänger (albeit the less attractive version; he takes after Dad’s side of the family), Jed Ayres, I figured now would be a good spot to take a break from Tom Pitt’s excellent new novel I am beta reading (working title 101 [I am going to urge him to change that]) to ruminate, speculate, and use other big words my worthless fucking Master’s degree got me to spew forth my feelings on the subject…

Man Out of Prison 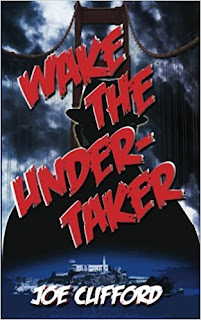 Now full disclosure, I’ve never been to prison. Okay. I’ve been to prison. One night. One, long, scary night when I was kicking dope. It was also the night before I woke up, naked, in a Massachusetts jail. I was alone. My ass felt fine. Not sure how I got from one place to the other. Vaguely recall trying to hang myself so I think the cops took away all my clothes before my court appearance. Hard to say. I was on a lot of drugs. This was also the day I turned 30 (Happy Birthday to me!)

Back to the genre. My first novel, Wake the Undertaker, read by three people, including my mother-in-law, who bought her copy used for .01, spawned from this idea. Man walking out of prison to meet the cold, uncaring world… 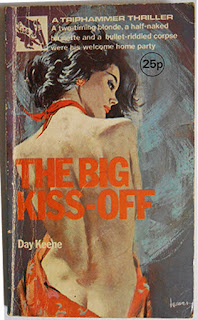 And I am not alone. How many books/films start with that concept? Day Keene, an unrecognized gem, wrote some killer novels using that as a set up. I’m sure it’s in a Jim Thompson book. The escapes are even better. Shawshank immediately comes to mind. Because I am down to about six minutes, I am not going to try and navigate the residual of poly substance abuse and blunt head trauma to give you an itemized list. You can use the Internet for that. Rather I’d prefer to talk about the why.

Why is this idea, man just out of prison, so appealing?

And as usual, film works better. Whenever I teach, I use film as an example; movies make life a fucklot easier. Whereas novels are sprawling and complex, movies, I don’t want to say “dumb down” because the cinematic experience is the highest of art forms (please please please someone option one of my books), let’s just say that two hours leaves little time to waste. 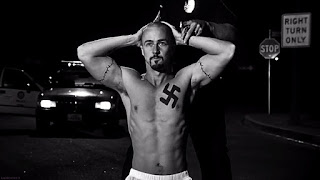 With my Ayres clock winding down, I’m going to pick one movie, one of the best ever made in my humble opinion—fuck, I should’ve gone with IMHO, but goddamn you millennials; I will not cheapen the English language by reducing it to a series of anagrams; however I will make a concession and at least go somewhat modern—American History X. 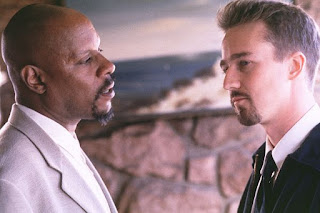 The film kicks off with Derek Vinyard, newly paroled, reentering society, with several members of the community worried about what this means. Of course we are worried too. Even if we don’t know why exactly. We don’t know what is going to happen, only that the stakes are high. And therein lies the appeal. No one knows. Not just with American History X, which uses its two hours to seriously fuck with your emotions, making you look away not once but twice (and you know the two scenes I am talking about). See, this is the thing with the man just out of prison. He doesn’t know either. All we know: the cards are stacked against him. Fuck, even goddamn Ant Man plays with this riff. And what do we love more than anything in our art? And underdog story. Followed closely by the bad boy. That’s not just for the ladies. Even dudes love the bad boy. He operates outside the law. While the rest of us are beholden to rules and laws, the bad boy is not. Granted in real life the “bad boy” is often a douche dating the pretty girl (you should’ve picked me, Tracy!), but there is an ever-lasting appeal. Even with a guy like Derek in X. The man out of prison employs both: underdog and the unknown. 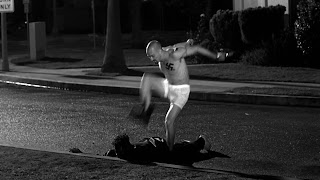 A neo-Nazi, racist, (spoiler alert), murderer, Derek still manages to be sympathetic. This is of course due to the brilliance of Tony Kaye’s direction and, what I think is, Ed Norton’s finest work. But it’s also that when we meet Derek he is not that same man he was when we went in. We learn this quickly. Like Cool Hand Luke, he has been broken. As we learn how, we come to care for a man who has done unspeakably terrible things. But in prison, he has endured, perhaps, worse. 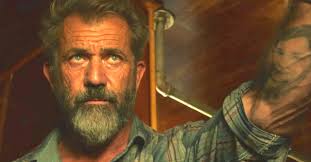 But it’s not only the redemption part. I recently watched Blood Father with Mel Gibson (his best movie in fucking-for-ever). Another ex-con trying to go straight. He’s not as bad as Derek Vinyard was. But he’s not exactly a good guy. Even Andy Dufresne in Shawshank got corrupted. Innocent or guilty when you go in, you are coming out of prison a criminal. In Blood Father, Gibson personifies the ex-con on the outside. The PO check-ins, the no guns, the no associations with criminals (although the filmmakers play with that one). Life is hard for us all. When everything you love and care for is gone—when your reputation and ability to get a fucking job has been taken from you—when you can’t even vote (that last one might just be because I hate fucking Trump)—life isn’t just “hard”; it’s fucking impossible. 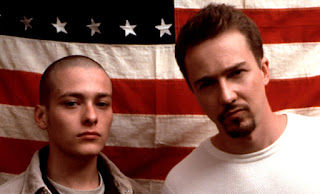 Down to a minute, I can surmise succinctly. The man just out of the prison movie highlights life en extremis. We are witnessing, either on screen or the page, a man (or woman) being reborn, in the most dire of circumstances, with hands tied behind their back. They are starting over … with nothing. All they know is being a criminal. Like that newly sobered addict walking up the hill, they know, if they turn around, a few short feet away, they can find relief. It’s like, to quote Bob Seger, running against the wind. And often it’s a losing battle, fueled by the teeniest glimmer of hope. But still they forge ahead, wanting, willing a better life.

Having lived that way, I can tell you it ain’t all that romantic. But watching, reading that shit? Gets me every time.

Joe Clifford is the author of several books including the Jay Porter series (look for number three, Give Up the Dead, in June) and co-editor of the Alcatraz anthology Hard Sentences coming in May from Broken River Books. Catch up with Joe at his website and follow him on Twitter  @joeclifford23
Posted by jedidiah ayres at 1:09 PM