Man Out of Prison: Oldboy 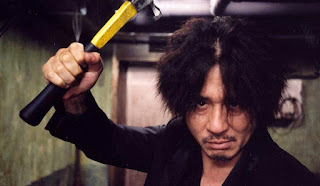 Counting down to the Netflix release of Evan Katz's adaptation of Dave Zeltserman's Small Crimes I'm looking at some of my favorite in the man-out-of-prison subgenre. Today it's Park Chan-wook's Oldboy.

The twist this time? 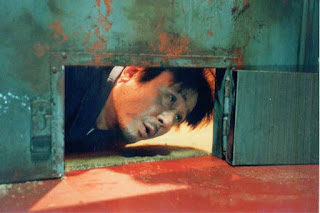 The story of Oh Dae-su (Choi Min-sik) who wasn't charged, convicted and imprisoned by any government, nope he was kidnapped and kept imprisoned, isolated in an apartment, for fifteen years by an anonymous enemy who just as suddenly and mysteriously releases him and apparently waits for Oh Dae-su to come find him for the revenge he'll understandably want. 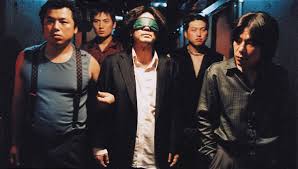 So. No parole officer, no piss tests, no new job shakedowns and also no family and friends to awkwardly re-connect with. As nobody knew what happened to him - he appeared to have simply vanished or abandoned his life - his world eventually went on without him (including his daughter who, he discovers, was adopted by a foreign family). 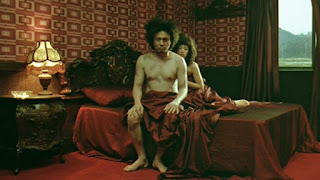 Here's the thing - he may be out of his cell, but he's every bit as imprisoned as when he was inside. His quest to discover the purpose of his imprisonment and to take some vengeance against his oppressor is as all-consuming and spiritually-destructive as the years of physical confinement were, and he appears helpless to jump that track. Of course his tormentor knows this and plays him expertly, calling to taunt him and goad his quest with preternatural precision. 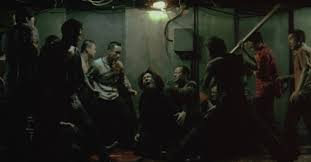 Unlike a lot of the other films discussed this month, Oldboy is a loud, flashy, kickass story full of cinematic pyrotechnics the aftershocks of which western audiences were still experiencing up until the Spike Lee remake a couple years back (haven't seen it, can't say, but hopes are not high). Blood is splashed, sex is sqirm-inducing and speaking of squirming - how about the octopus-eating scene? 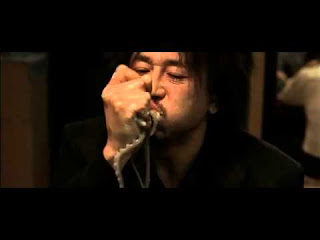 Holy hell, Oldboy is some strong medicine and good for what ails you.
Posted by jedidiah ayres at 7:16 AM